Why I don't work first thing on Mondays

Reader, let me tell you a secret: I spend the first two hours of my Monday workday not working.

Ok, it's not that much of a secret; it's the headline of this piece, and it's blocked out on my calendar. By this point, every Jane, Dick, and Harry knows that I don't do work on Monday mornings—and that I don't think you should, either.

Let me explain how this happened.

Carving out space for L&D 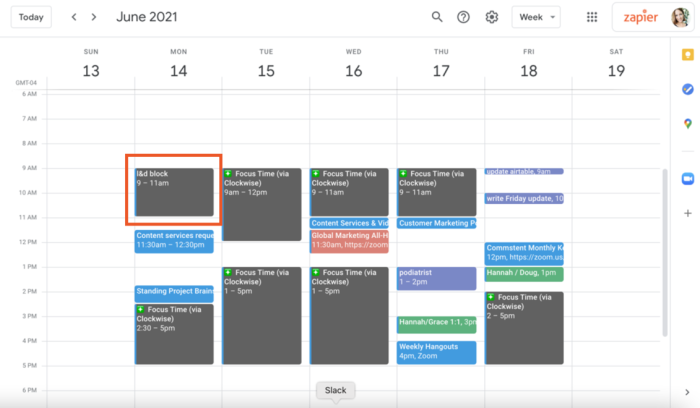 But after a couple of months, I noticed I wasn't actually using that block of time to learn. It was regularly being eaten up by "real" work—like wrapping up projects or tying up loose ends before the weekend.

It was incredibly frustrating because I felt I wasn't making progress toward my professional development goals. At the same time, I felt powerless because, ultimately, my work has to get done—not just because that's my job, but because I collaborate with others who rely on me to do my share of the work on time.

I'm lucky to have a supportive editor-slash-manager who doesn't just help me write better but helps me work better, too. So when we had our weekly 1:1, I mentioned I'd been struggling to honor my Friday L&D time blocks.

"Why don't you just move your L&D block to Monday morning?" she suggested.

Her rationale? Not much happens on Monday mornings, since folks are still getting back into the groove after the weekend. And because I'm on the East Coast, I start the workday three whole hours ahead of many of my teammates—so Slack is pretty quiet, and there's not much else vying for my attention.

I made the switch, and a few weeks later, I was absolutely delighted to have met a few of my learning goals. Here's why I think it worked—and how you could use a similar strategy for whatever matters to you.

It eases you into the workweek

The most obvious reason this schedule works: it frontloads something that's otherwise easy to put off. L&D becomes the very first thing I do during the workweek, instead of being an afterthought or something I try to squeeze in amid other tasks.

In the past, keeping my Friday L&D block was extra-hard after a long or chaotic week. Now, it's the first thing I do after the weekend—so I'm less mentally tired and more prepared to, you know, learn. Plus, the Monday morning non-work block gives my brain a chance to warm up. Instead of jumping right into untangling a problem, syncing with my team, or managing a project, I ease myself into the workweek with work that's a little bit lower stakes.

I try to make a point of not checking Slack first, either. While I'm not super consistent with this, I am pretty consistent about not responding to any messages until after my learning block. As a chronic Slack overuser, that's a big improvement for me.

Even if you don't have a formal L&D plan, almost everyone has a queue of job-related articles they want to read, webinar recordings they want to watch, and professional communities they want to connect with more regularly. Blocking out time on the first day of your workweek can help keep those things from falling through the cracks in favor of "real" work.

It wards off the Sunday scaries

I'm a big proponent of not thinking about work outside of work hours. Boundaries are good and important, and if my therapist is to be believed, I'm pretty good at having them. But I'm also an anxious person, so I inevitably spend part of Sunday evening thinking about all the stuff I need to do and follow up on the next day. I think most people can relate.

And that's honestly the biggest reason I love this schedule change so much: it helped me ward off that feeling of anxious anticipation some call the "Sunday scaries."

Instead of giving my brain a chance to spiral while thinking about everything I have to do the next morning—and the order I'll do them in—I spend Sundays knowing that the first thing on my calendar is a pretty relaxed learning block. Sure, I have L&D goals to meet, but knowing I can use that time to learn at my own pace takes some of the pressure off.

Anxiety often spikes when things feel unpredictable or overwhelming, and your brain spirals out into thinking through all the possible scenarios that could happen. By chunking off the first two hours of Monday, you give your brain a predictable (and do-able!) next step.

But what if I don't want to learn?

If L&D isn't something you're invested in right now, this scheduling trick can work for any number of things. Here are some ideas.

Flexible scheduling is one of the best ways to work better. Your work schedule should work for you, not the other way around. That means building in time dedicated to whatever it is you're trying to get done—especially the things we often think of as "not real work" or "extra." In my case, it's my learning and development time. For you, it could be anything that you're struggling to find time for. Start doing it Monday morning, and see what happens.

Why won't Google Docs let me paste without installing an extension?

From Fortune 500 to freelance

The Best Smartphones Under Rs. 40,000 You Can Buy In India

Emmert tells schools to act on NIL or he will