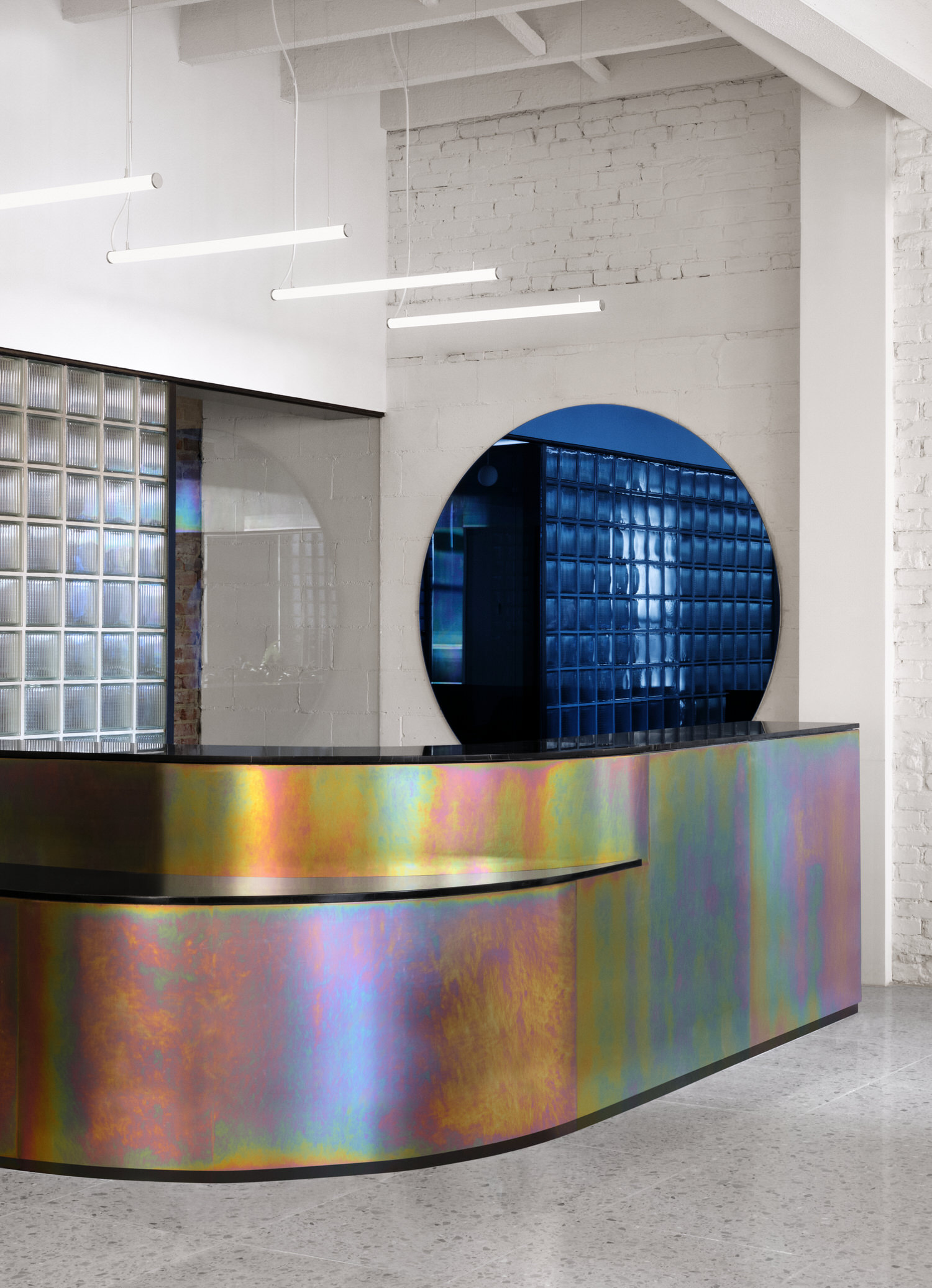 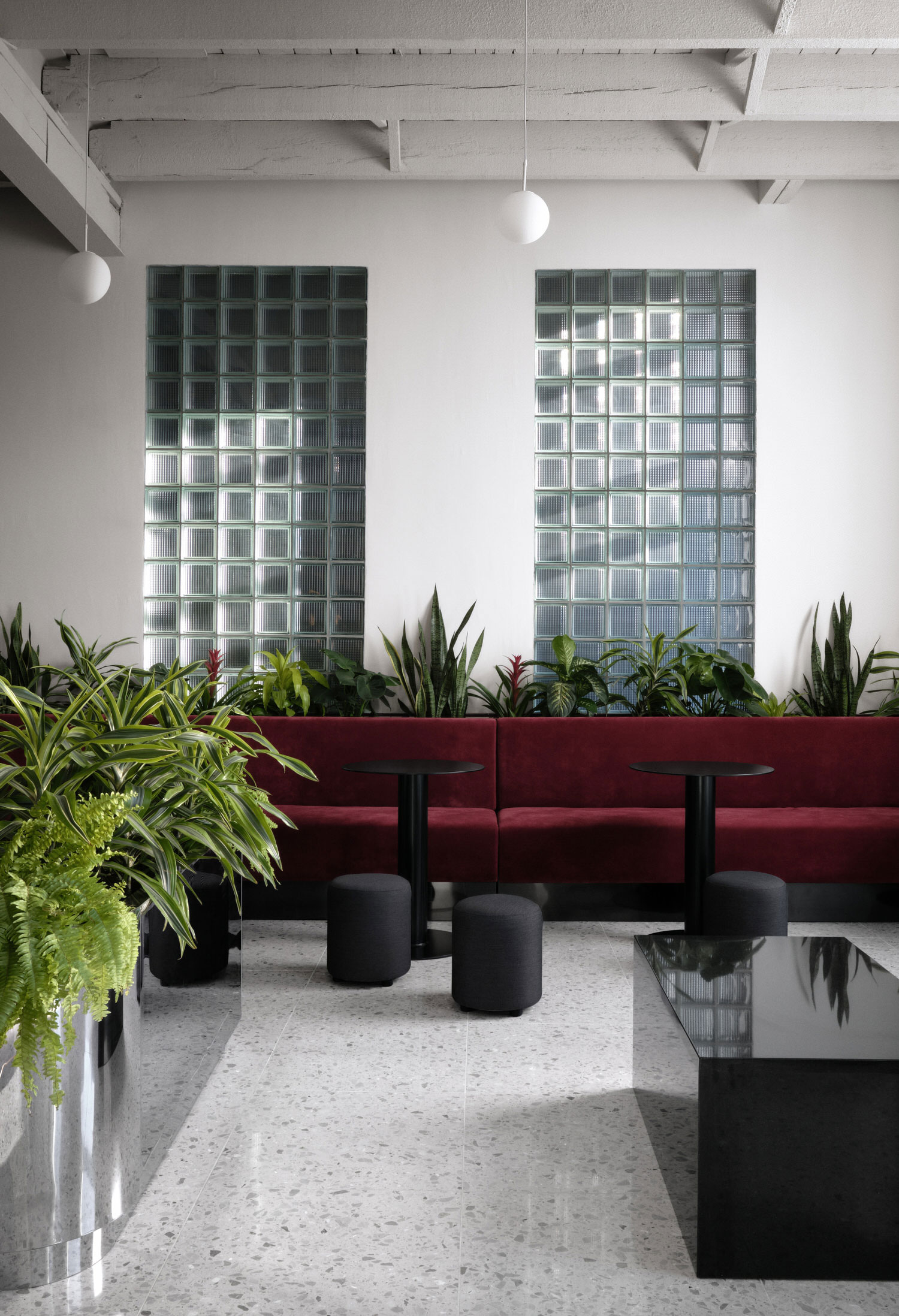 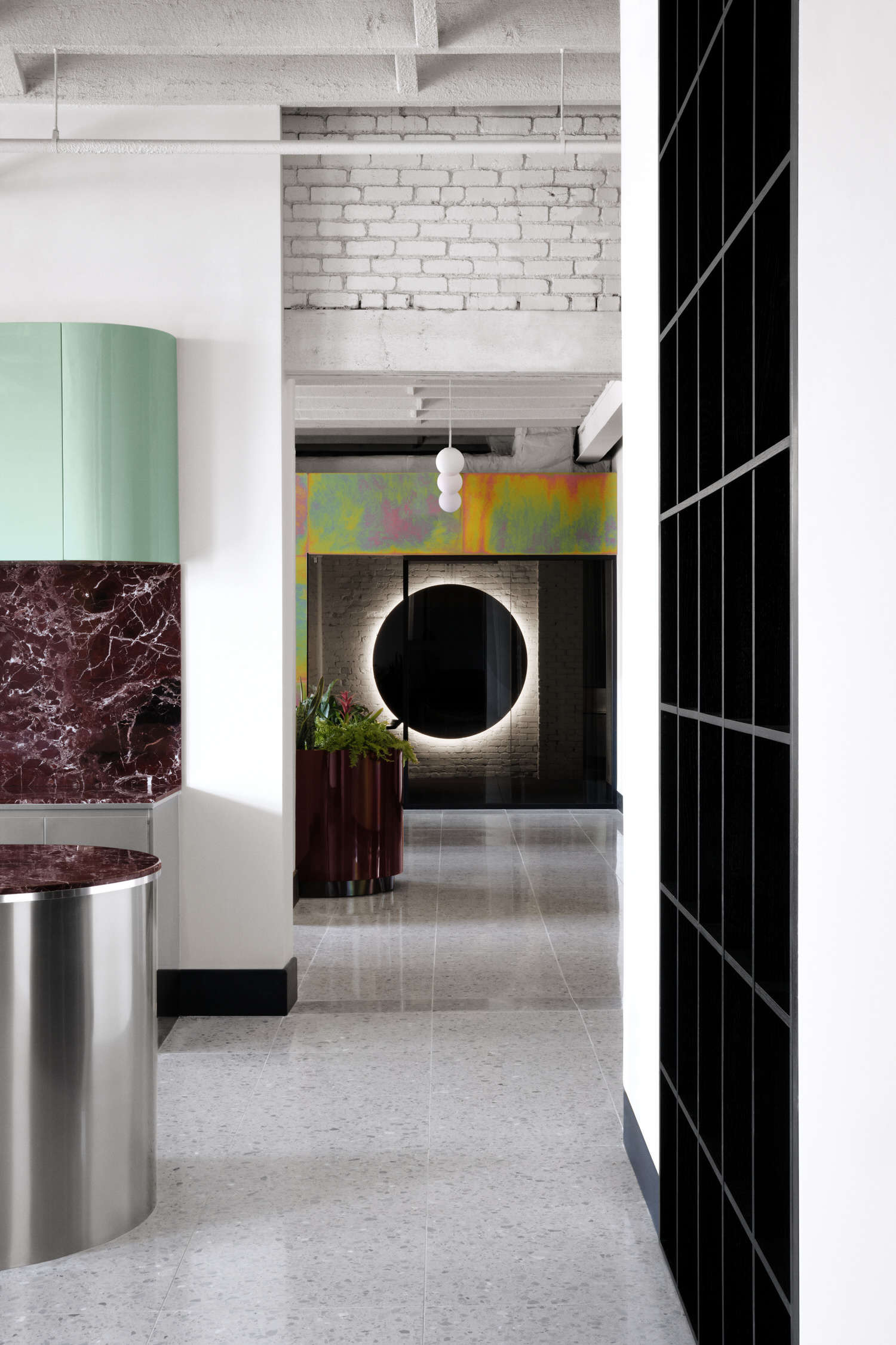 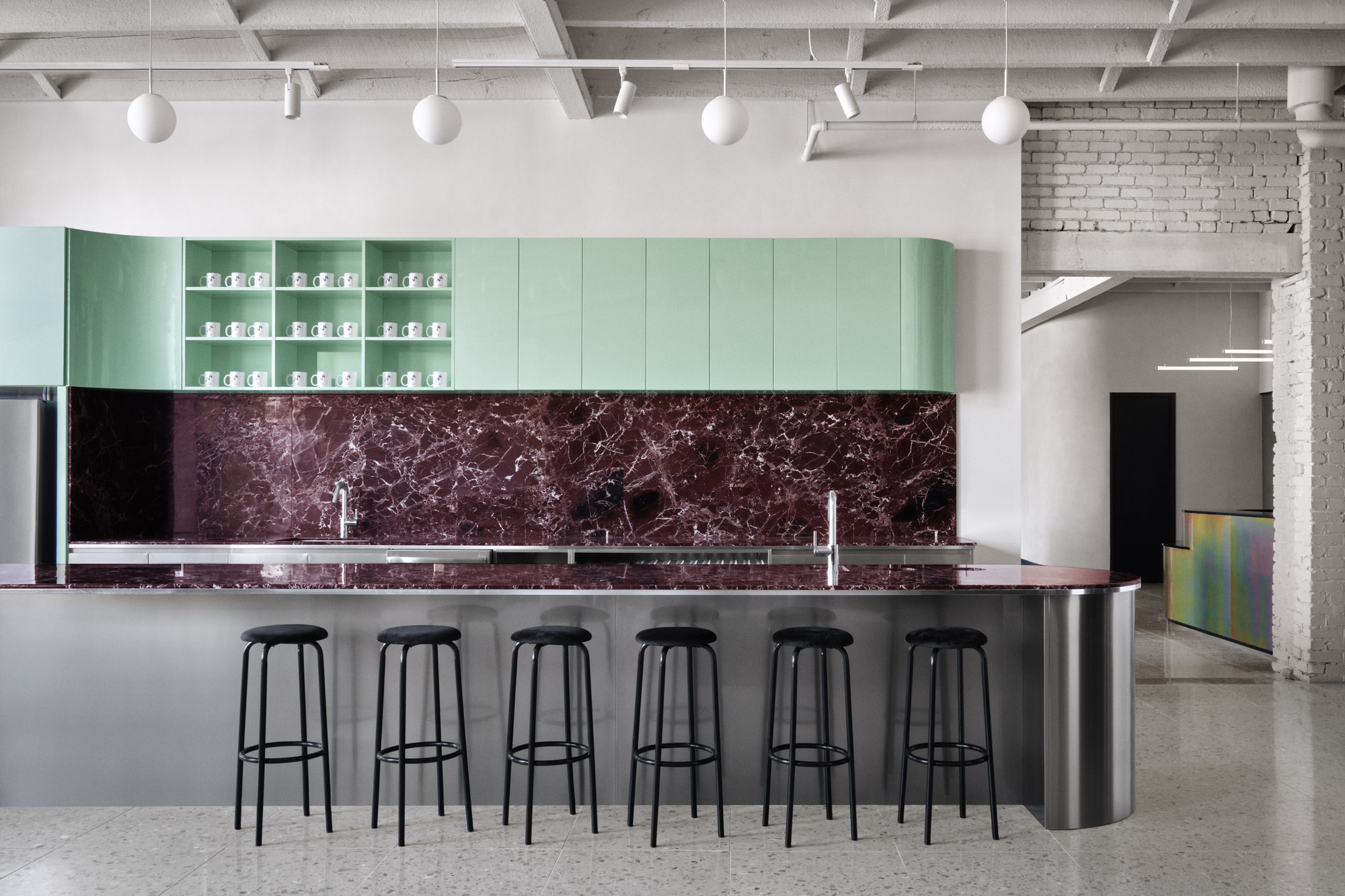 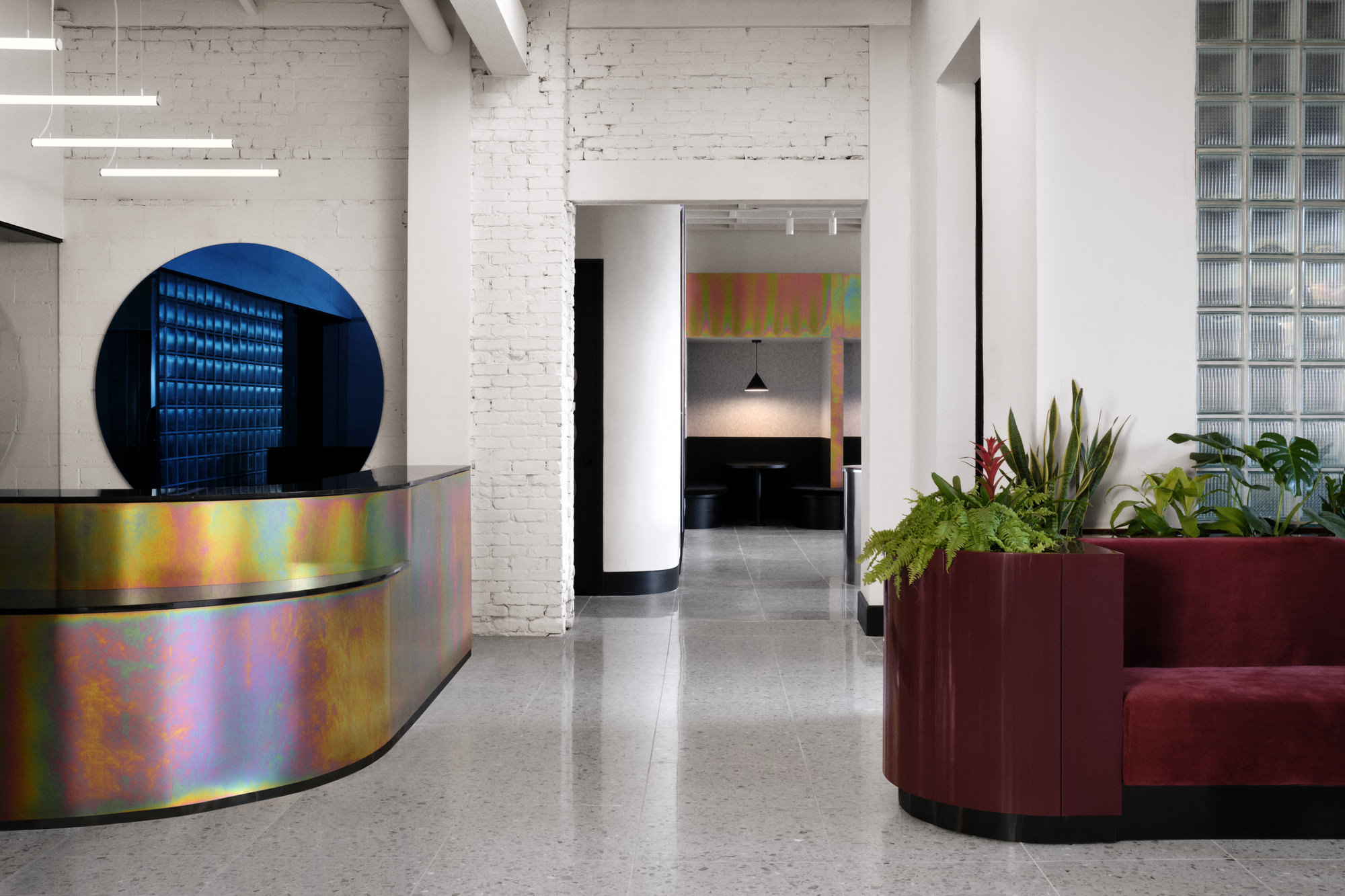 Montreal is home to a new co-working space beaming with youthful vitality. Fresh hues of mint, burgundy and psychedelic zinc passivity are splashed against a well lit backdrop of glass brick walls and well placed skylights.

Located on the second floor of a 743 square metre building in the trendy suburb of Verdun, this is the first location for the new co-working brand Spacial. The office was designed to stand out from its competitors and in turn offer a unique vision for the future of coworking.

Enter Ivy Studio, a local design practice tasked with transforming the vast arena into a flexible work environment for up to 120 people. Open public areas and private rentable offices are separated into two distinct zones by a glass brick wall housed behind the reception desk.

Although lacking in natural light you would never really know with new glass brick openings puncturing the staircase walls and a total of 20 skylights surrounding the private offices, letting a stream of sunlight into the back section of the volume. 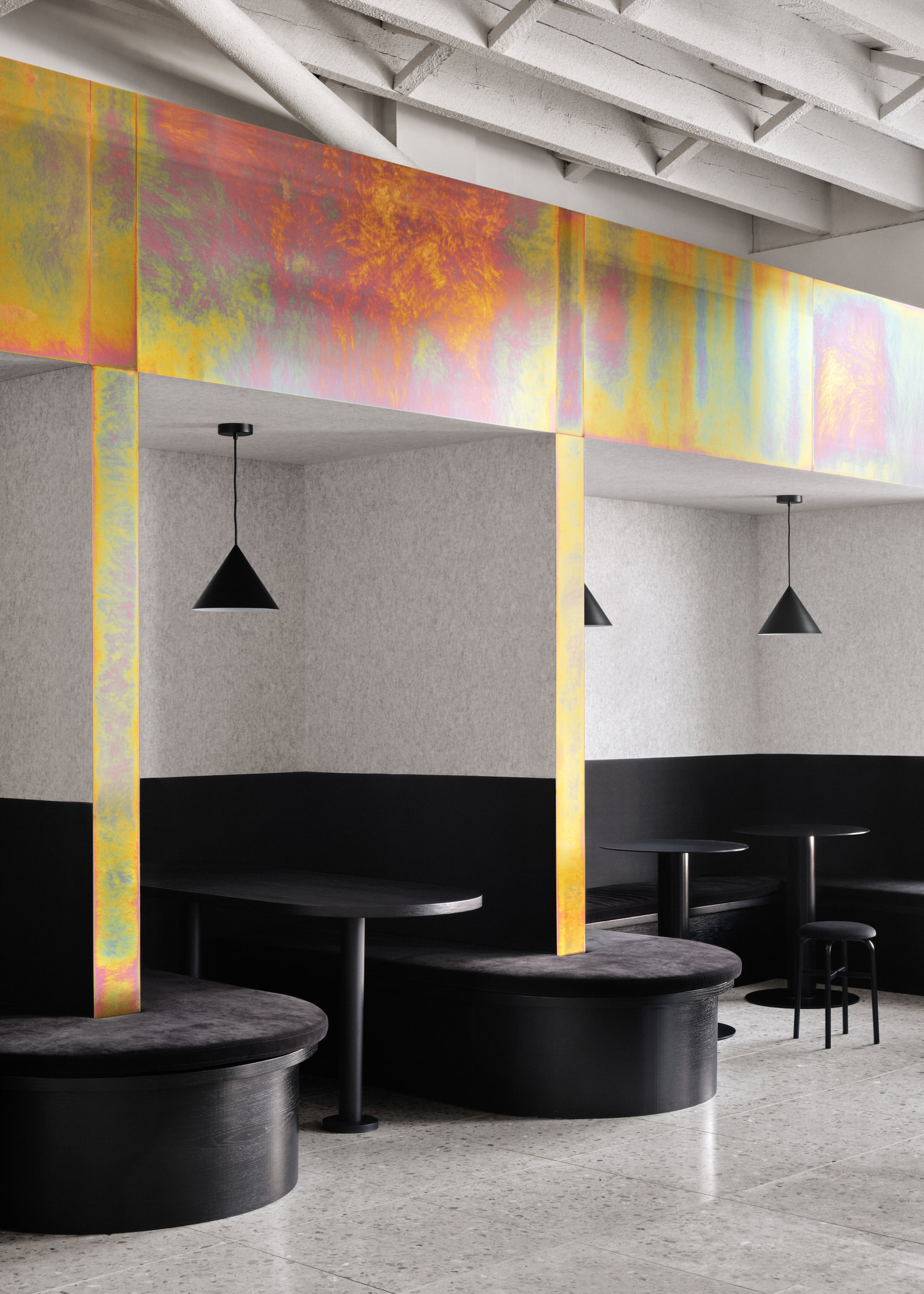 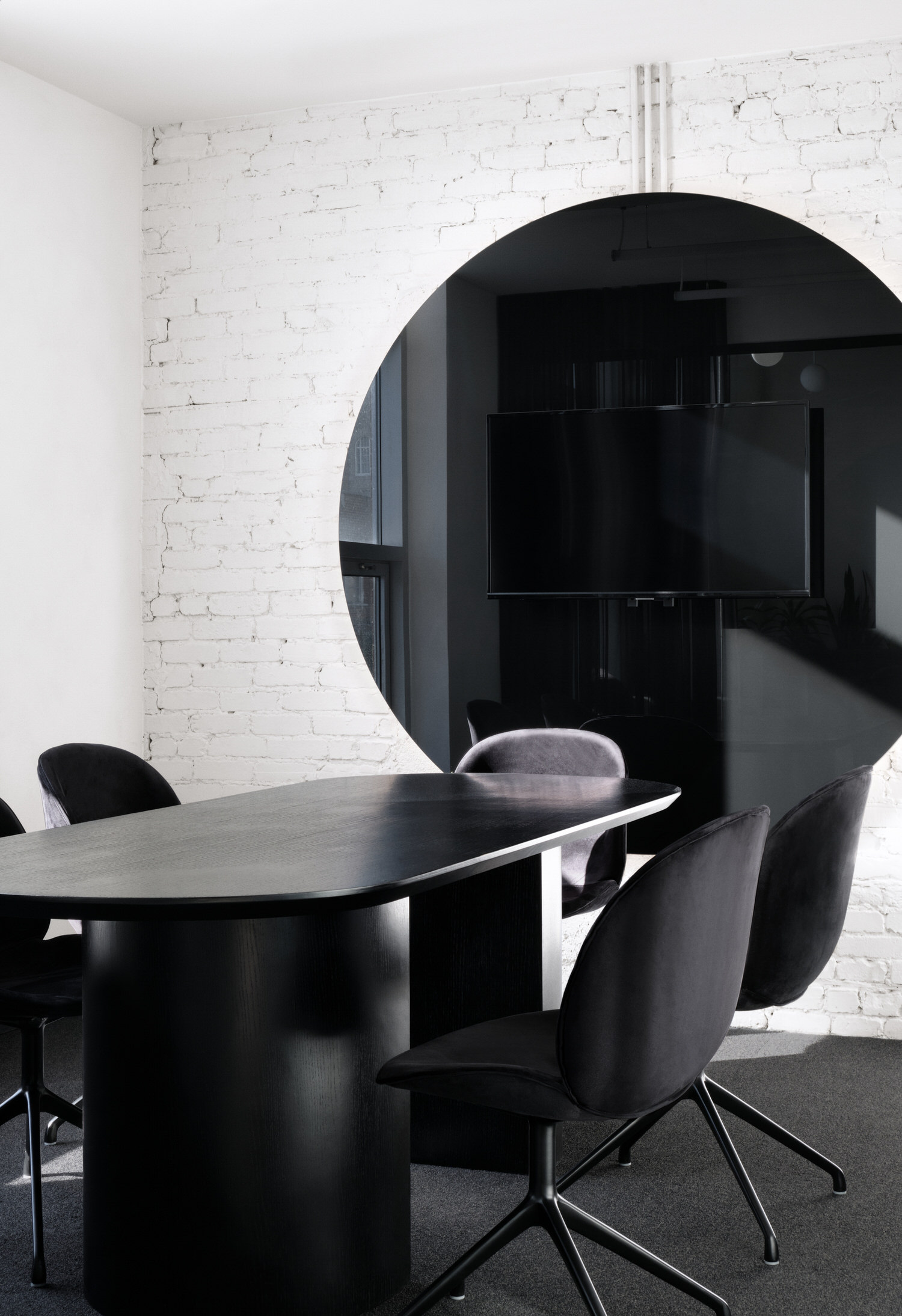 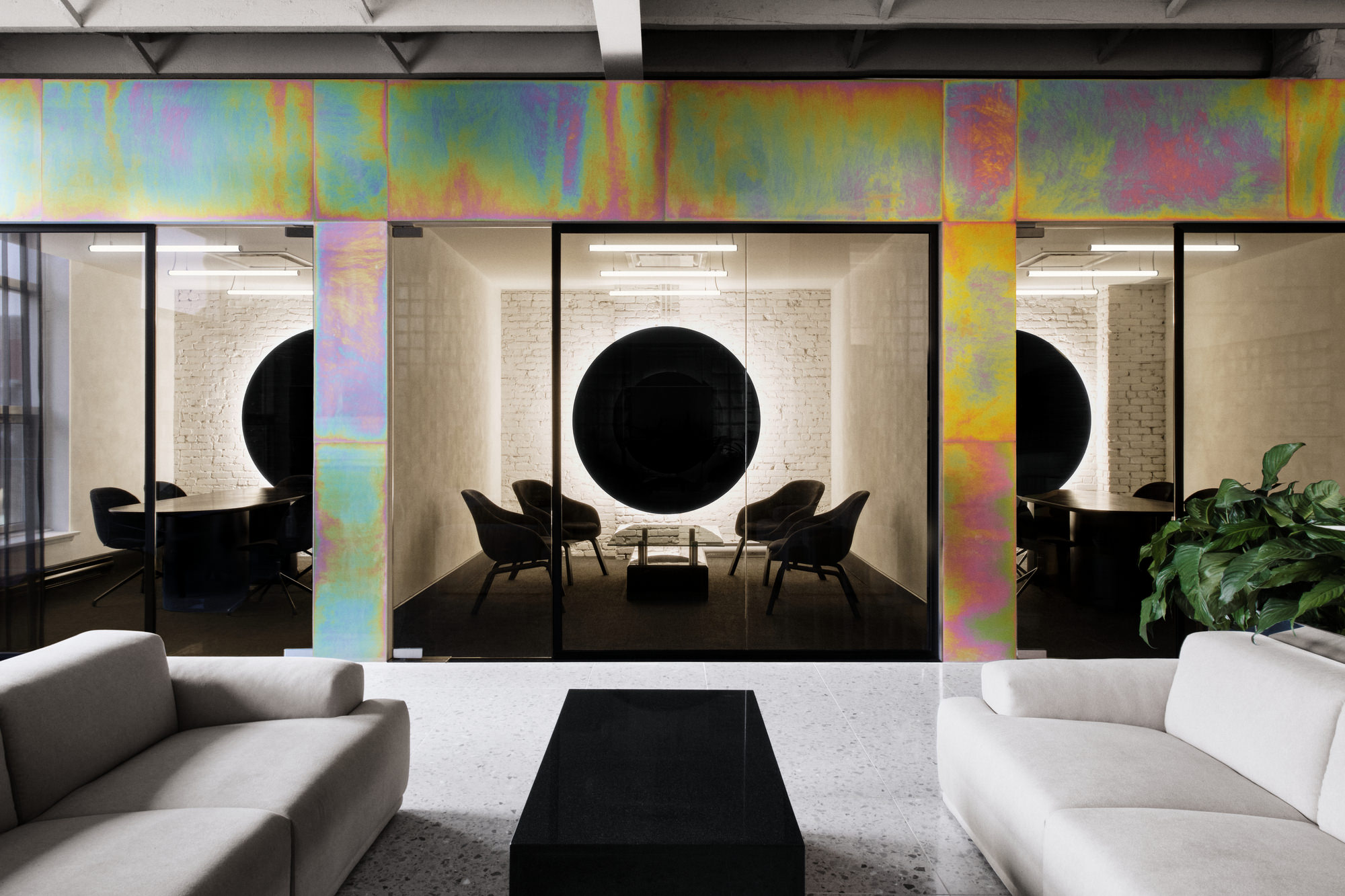 Organised in the centre of the space the private rentable offices are condensed into a single core. Composed of fixed and sliding glass panels the entire compound, mullions and carpeting included, is awash with burgundy. “With the exposed brick walls, sandstone floor tiles and abundance of natural light pouring into the hallways, the general feeling resembles that of working in an exterior courtyard.” the team said.

Meanwhile, at the front, the reception desk is clad in kaleidoscopic zinc plated materiality. Fit with a hanging blue orb mirror the overall effect is an arresting sight. Conference rooms and booths sit on either side, clad with the same zinc sheets, the two open spaces converging in a large golden monolith. The mostly black furniture is punctured by a long burgundy velvet banquette and chrome planters dispersed throughout the office.

On the opposite side, the kitchen adds a similar colour splash with its Rosso Levanto marble and mint green curved cabinetry. A rounded stainless steel island mimics the chrome planters. 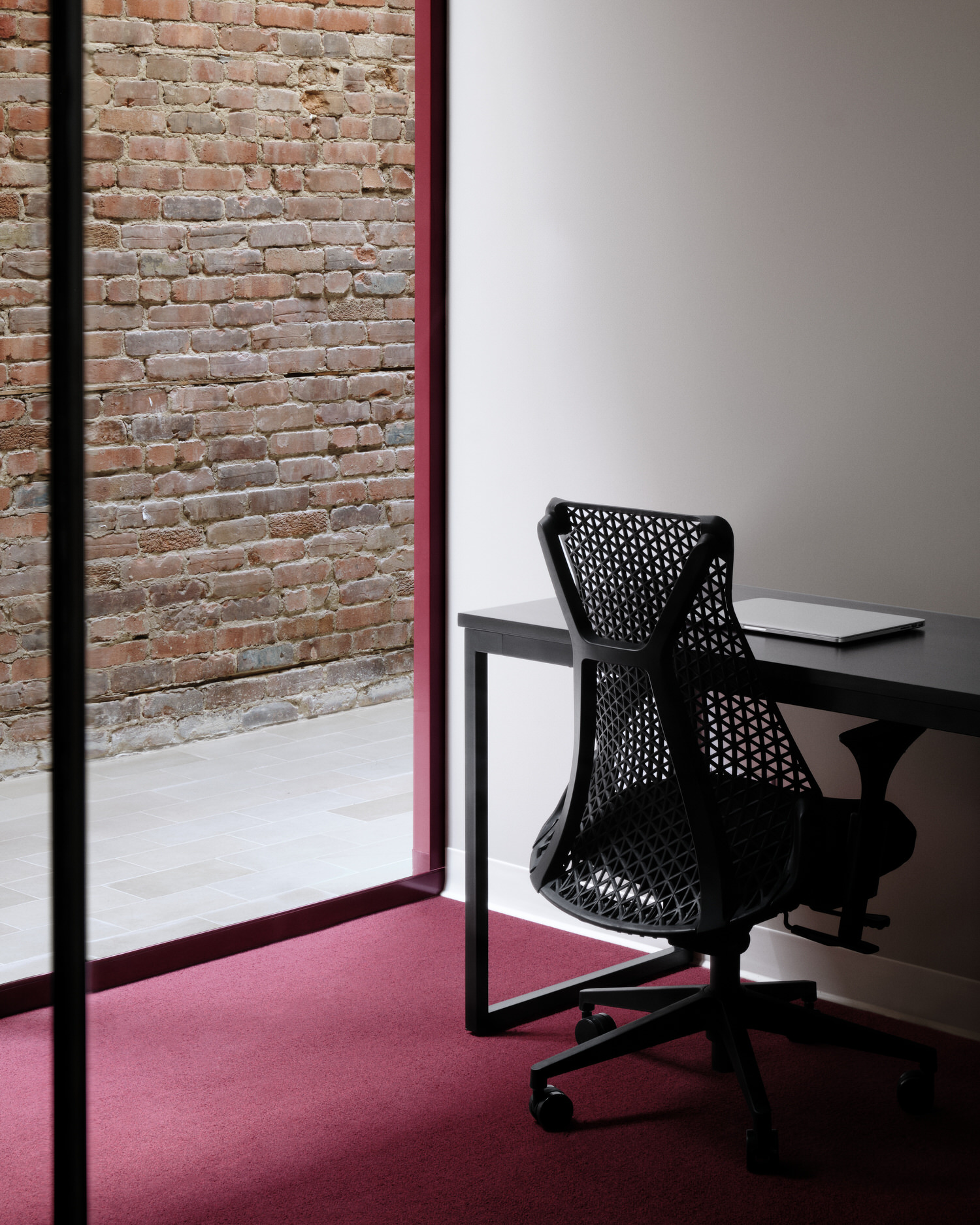 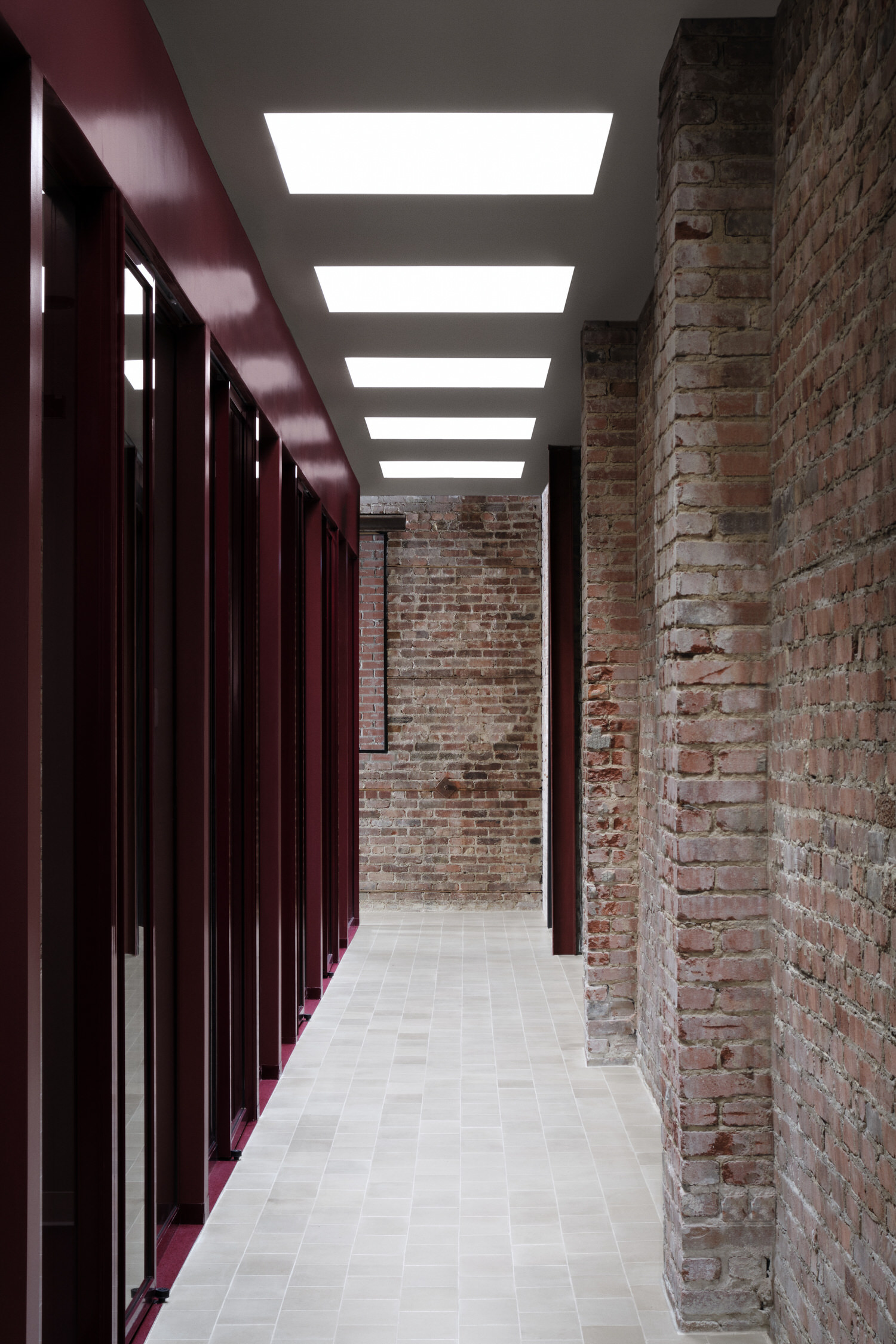 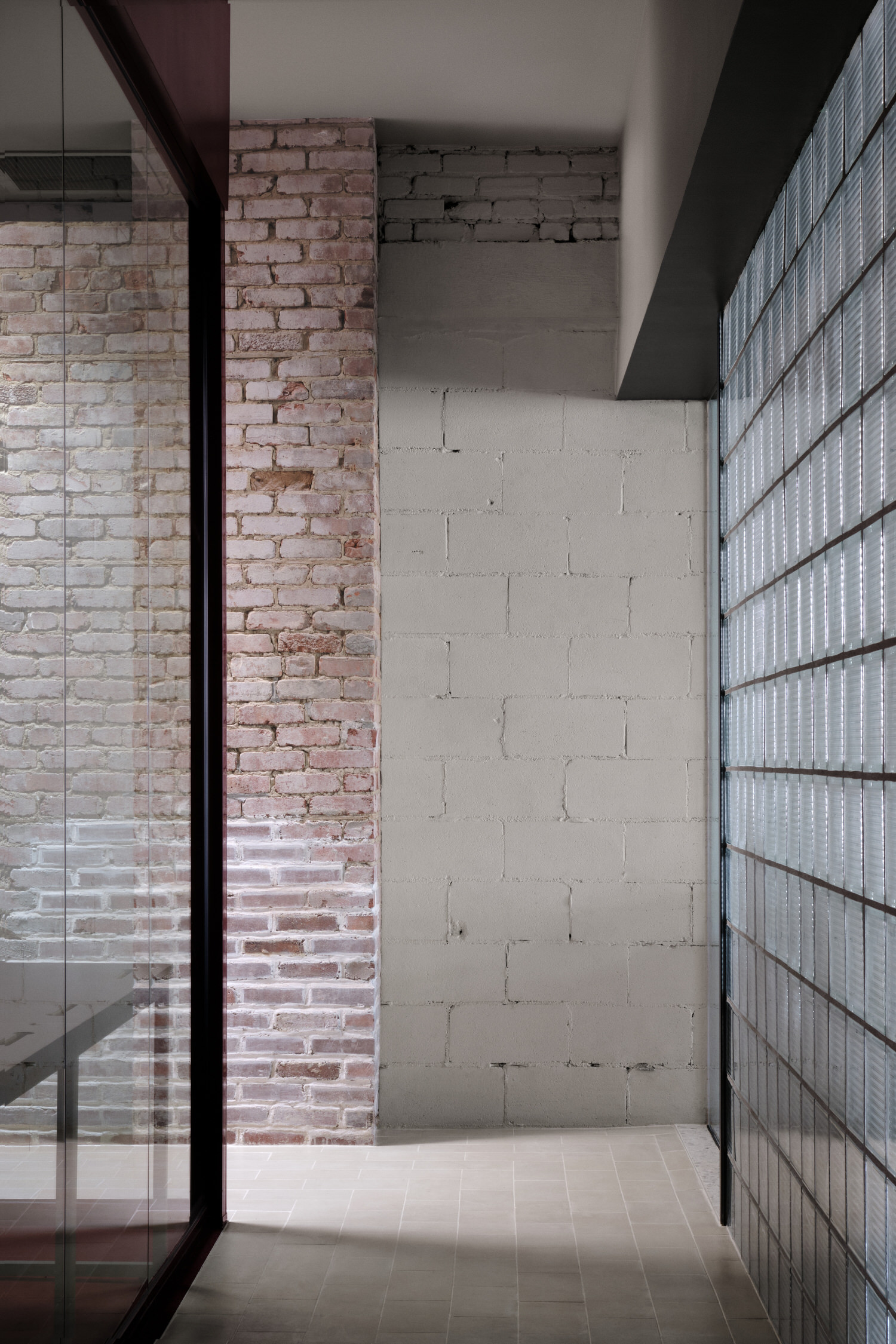 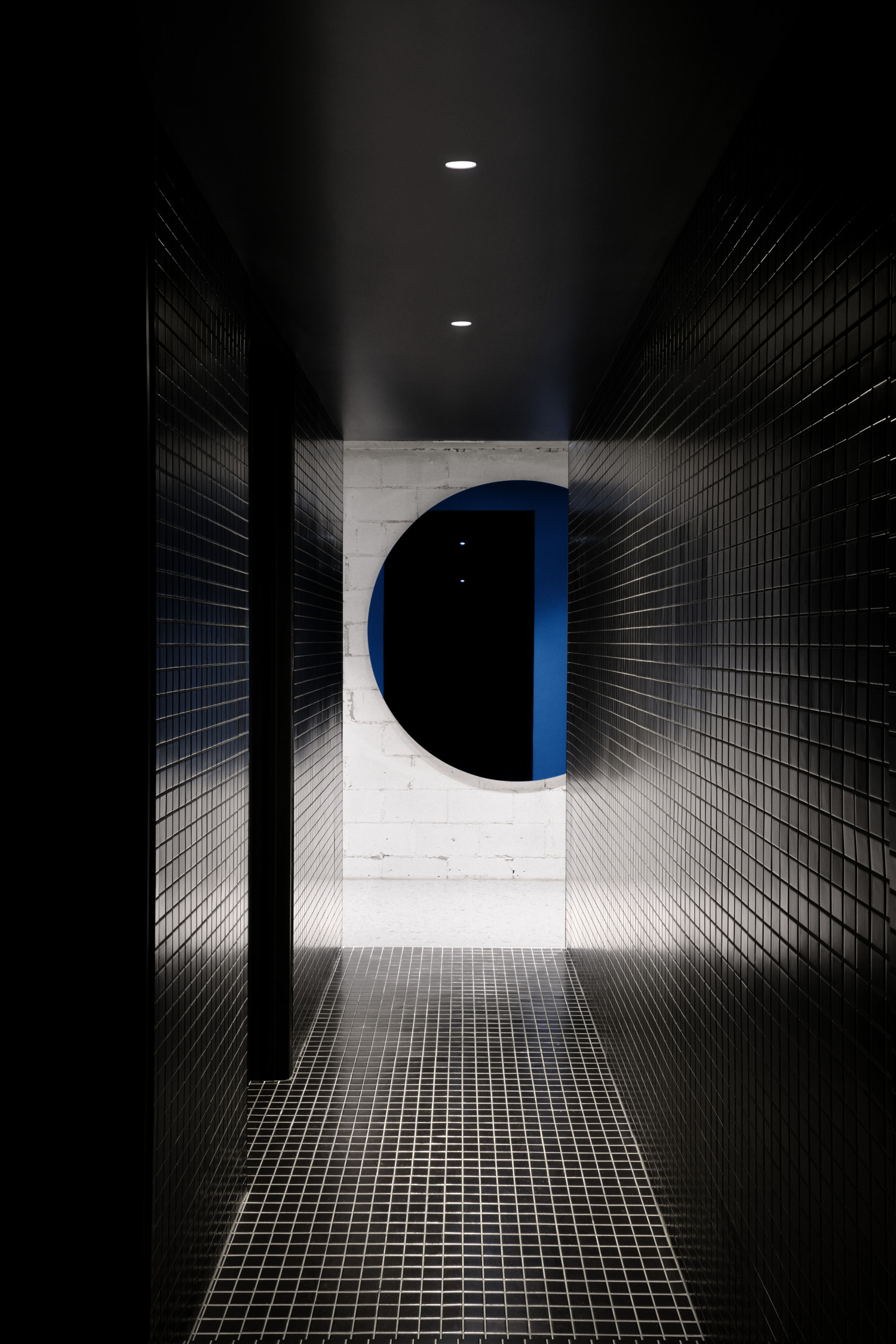 Celebrating the structure of the existing building, old ceiling joists and exposed brick are coated in off white lime plaster, paired with light grey terrazzo flooring to form a textured backdrop for the more colourful fixtures. Televisions are camouflaged in front of circular black mirrors in the conference rooms, the backlight accentuating the white-washed brick wall.

Hidden between the kitchen and office area the individual washrooms sit in defiant contrast to its bordering interiors. Acting as a single unit black floor to ceiling tiles cover the rooms with matching plumbing fixtures – all black everything, seriously.

Two blue orb mirrors have been installed back to back on the dividing brick wall, bridging the gap between private and public. Visible from any spot you may be perched they act as guiding beacons in this boundless labyrinth of a space.