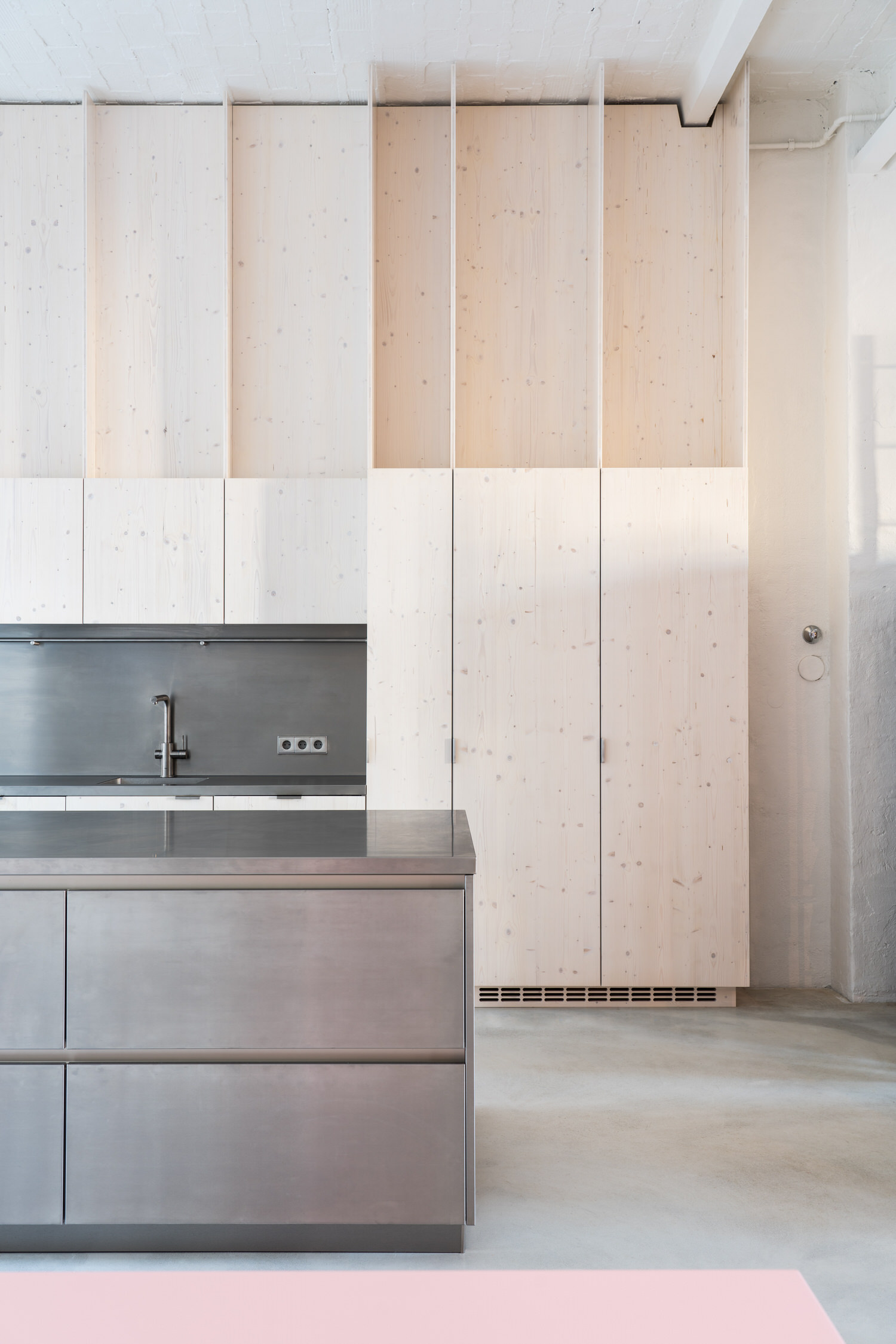 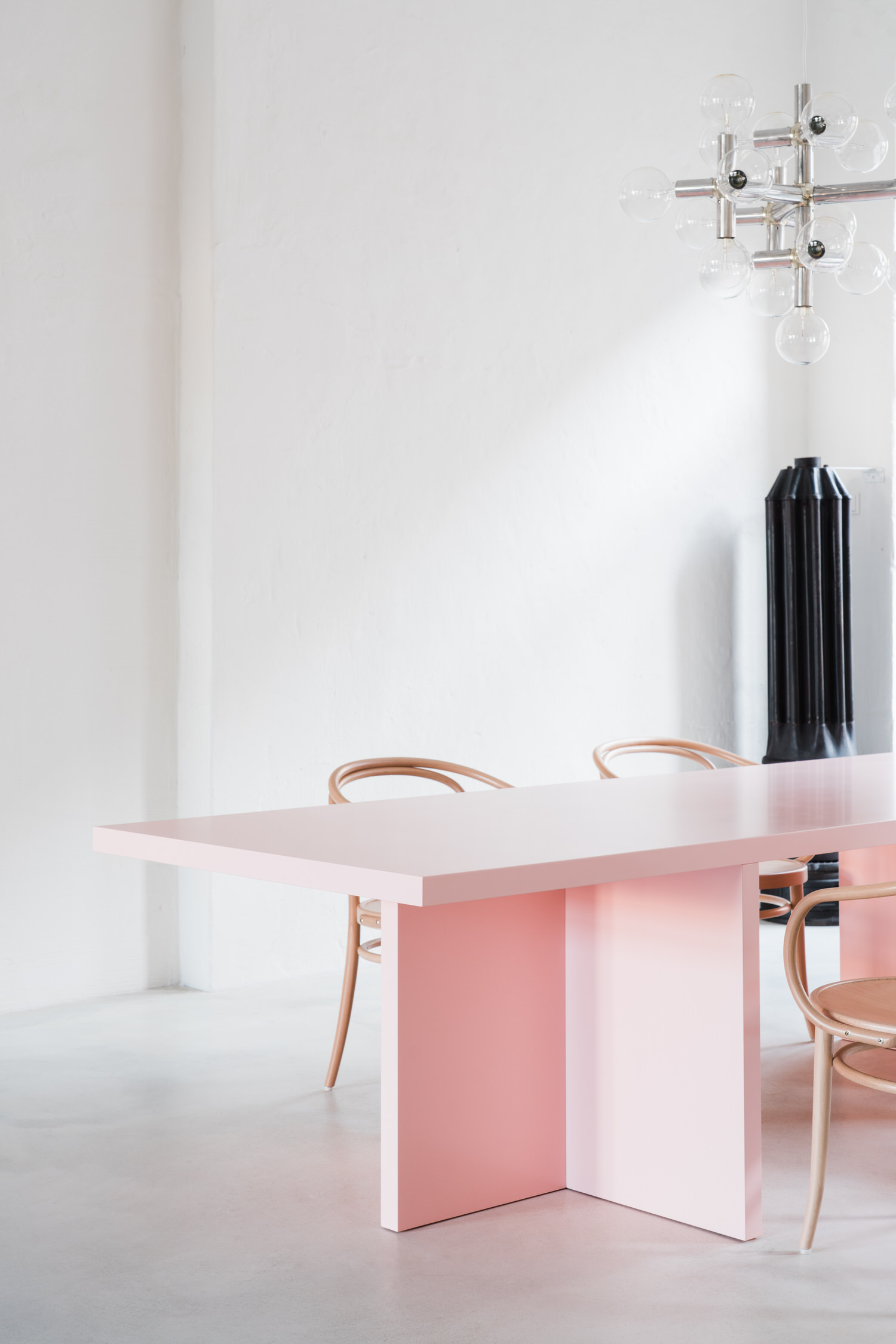 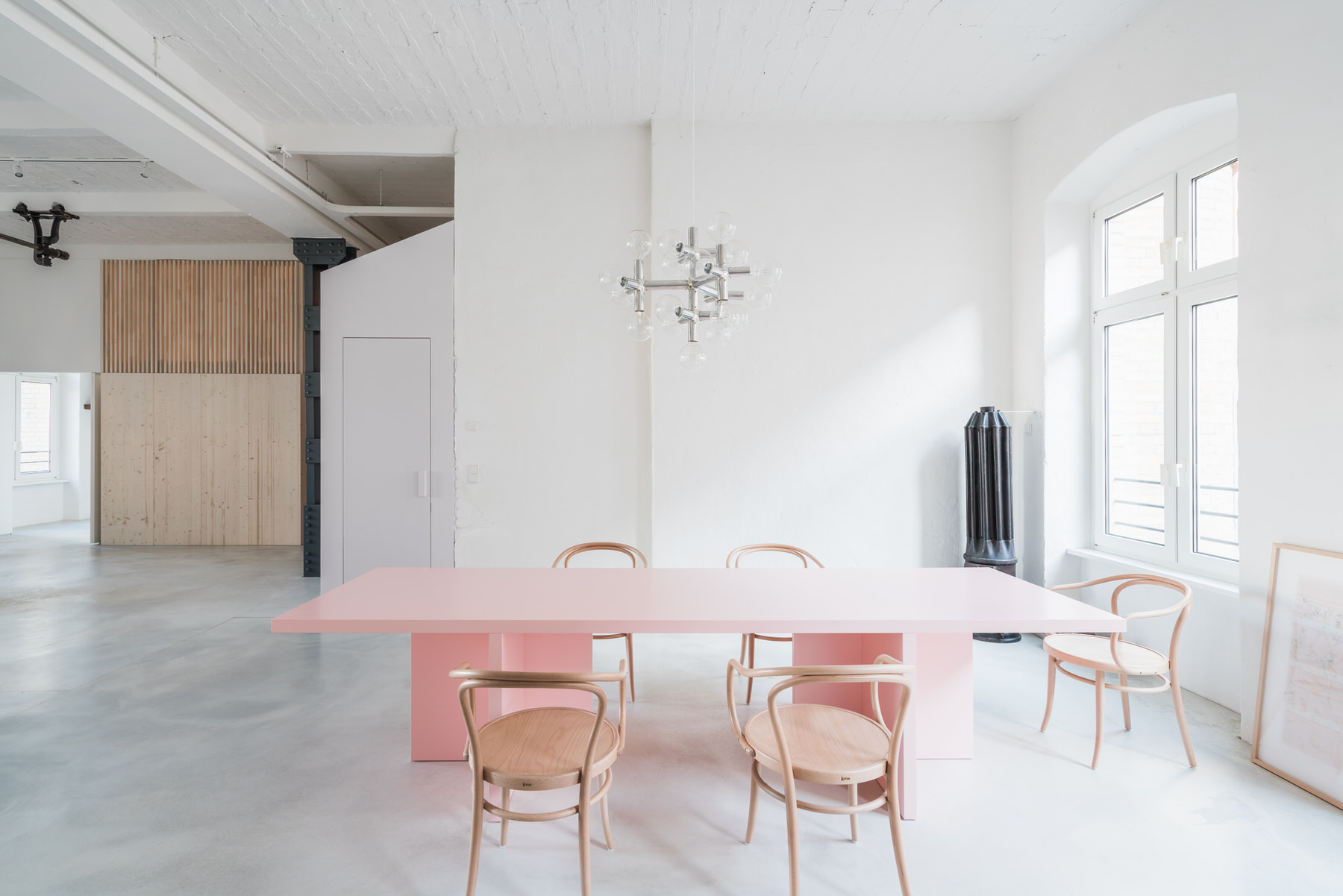 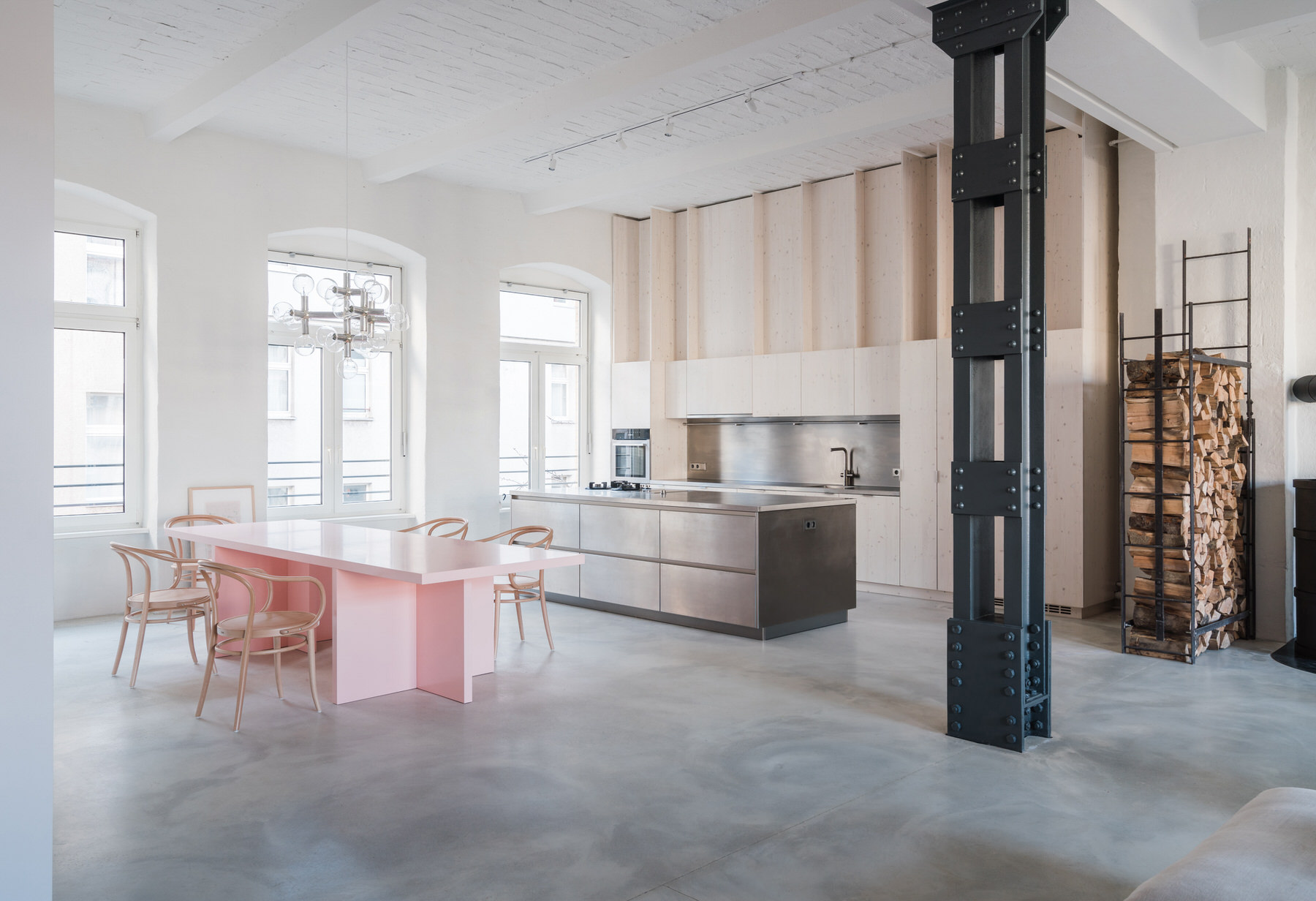 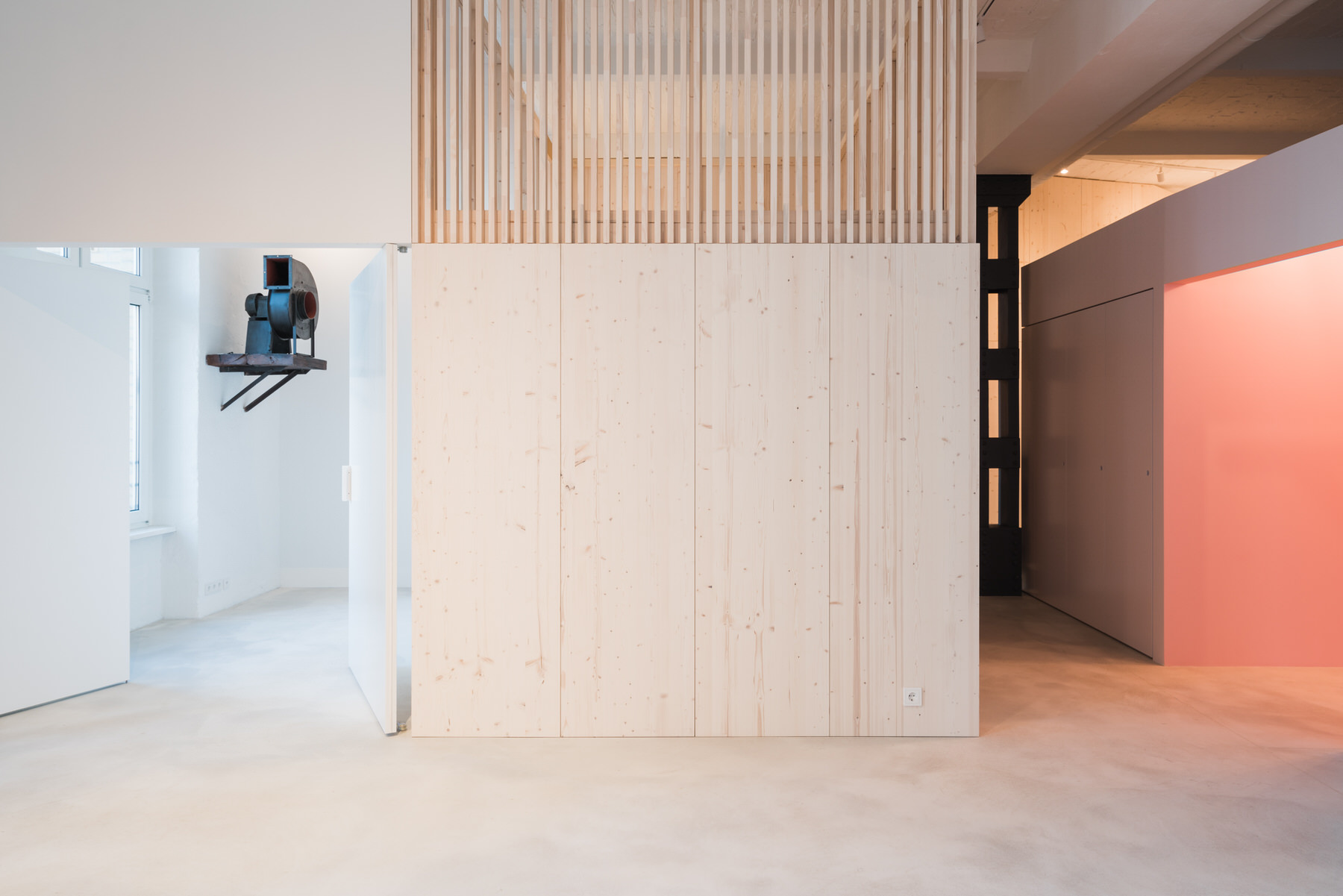 Somewhere in Berlin’s Kreuzberg district lies a charming family apartment with an interior that almost feels like living within a luxe, niche high fashion boutique. Designed by German practice Batek Architekten, SCH52 is a refreshing of a historically rich loft. With double-height ceiling interlaced with moments of conceal and reveal – this apartment for a family of five is guaranteed to make you feel like you’ve escaped somewhere better than your own home.

Formerly a factory, the loft is jovially described as the ideal bachelor pad due to generosity of space. Opting for minimal disturbances to the distinct characteristics, the architects took existing cast-iron pillars and the array of tall windows as implied thresholds and visual divisions of the 240 square metres floorplate. This strategy led to a distinctive splitting of the area into two zones – the public area with open plan living, dining and kitchen to the west, and private spaces arranged to the east.

Entering SCH52, visitors face a narrow space formed by a series of three-layer timber cubby-like boxes that house private areas. Each box, arranged diagonally and individually capped with a slanted roof, encloses either the three bedrooms, bathrooms, storage and studio. Batek Architekten purposely capped the timber boxes just below the existing characteristics to create a roofscape and an exposure of warehouse’s overarching beams. The dressing room, however, is capped with a flat roof to serve as a makeshift second floor for the house. Only accessible via a staircase concealed by a louvre, visitors can sit against a timber balustrade while occupying the ‘roof terrace’ as a library or guest area. Such playful decision creates an adolescent charm warmly welcomed for the former bachelor apartment. 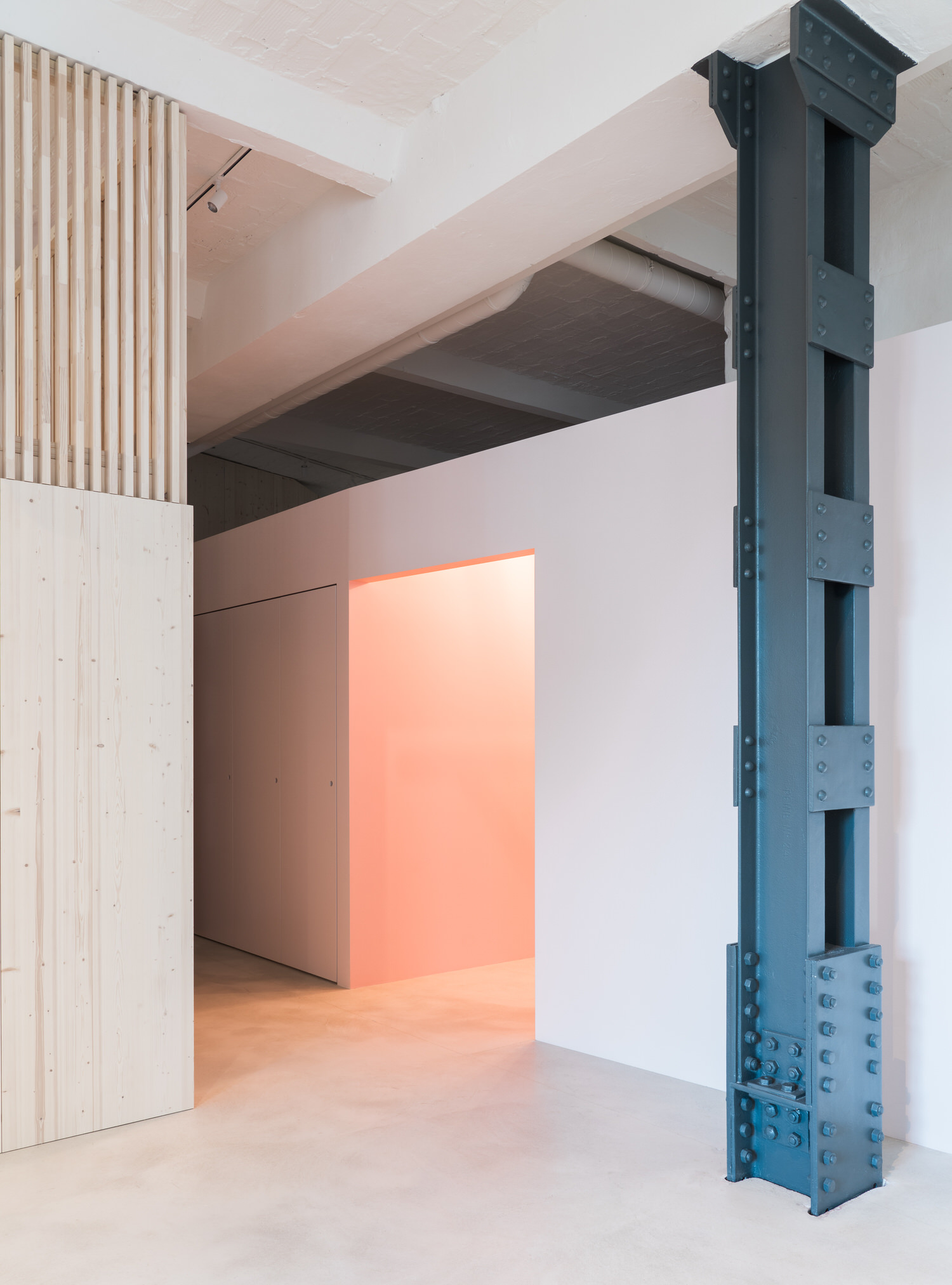 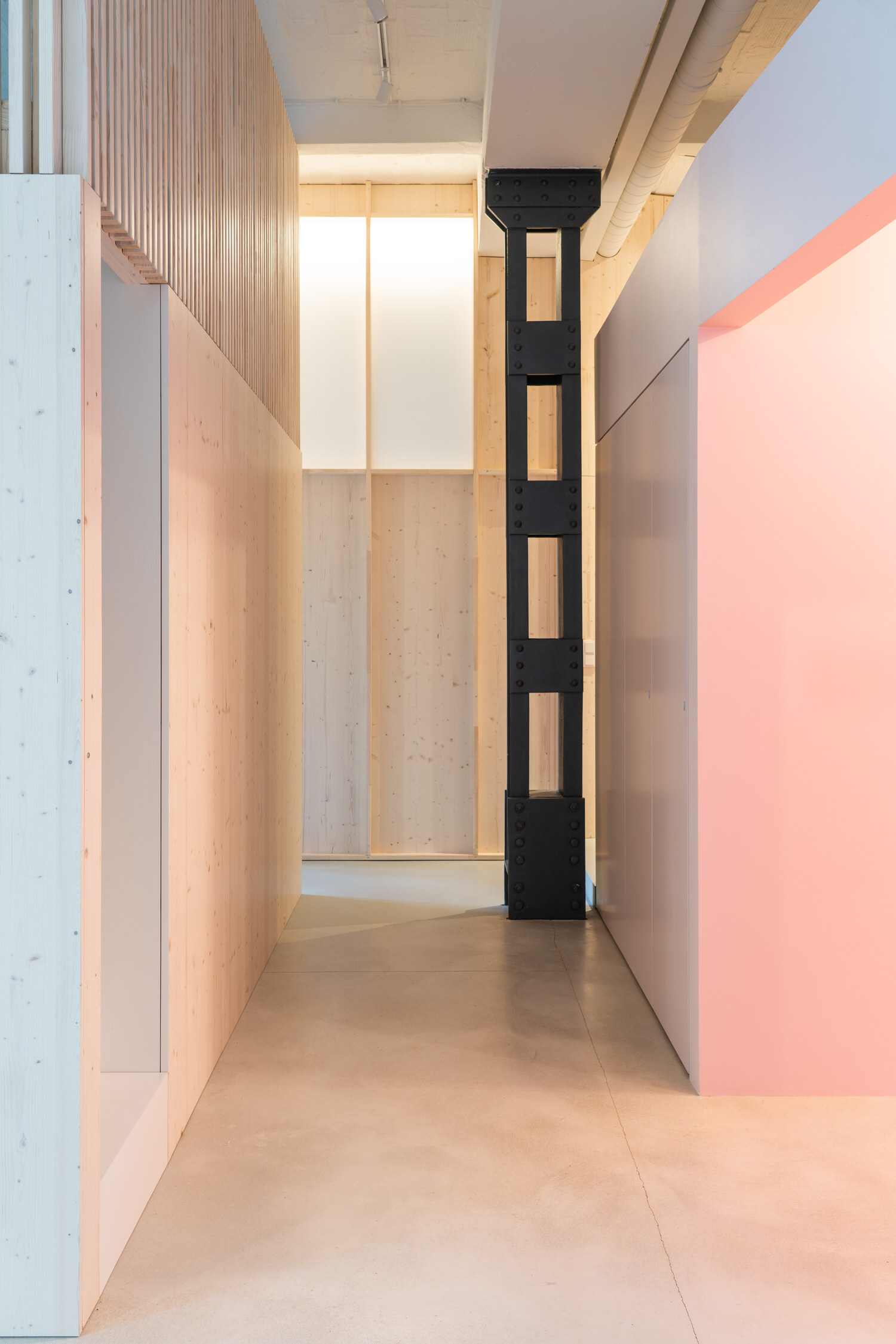 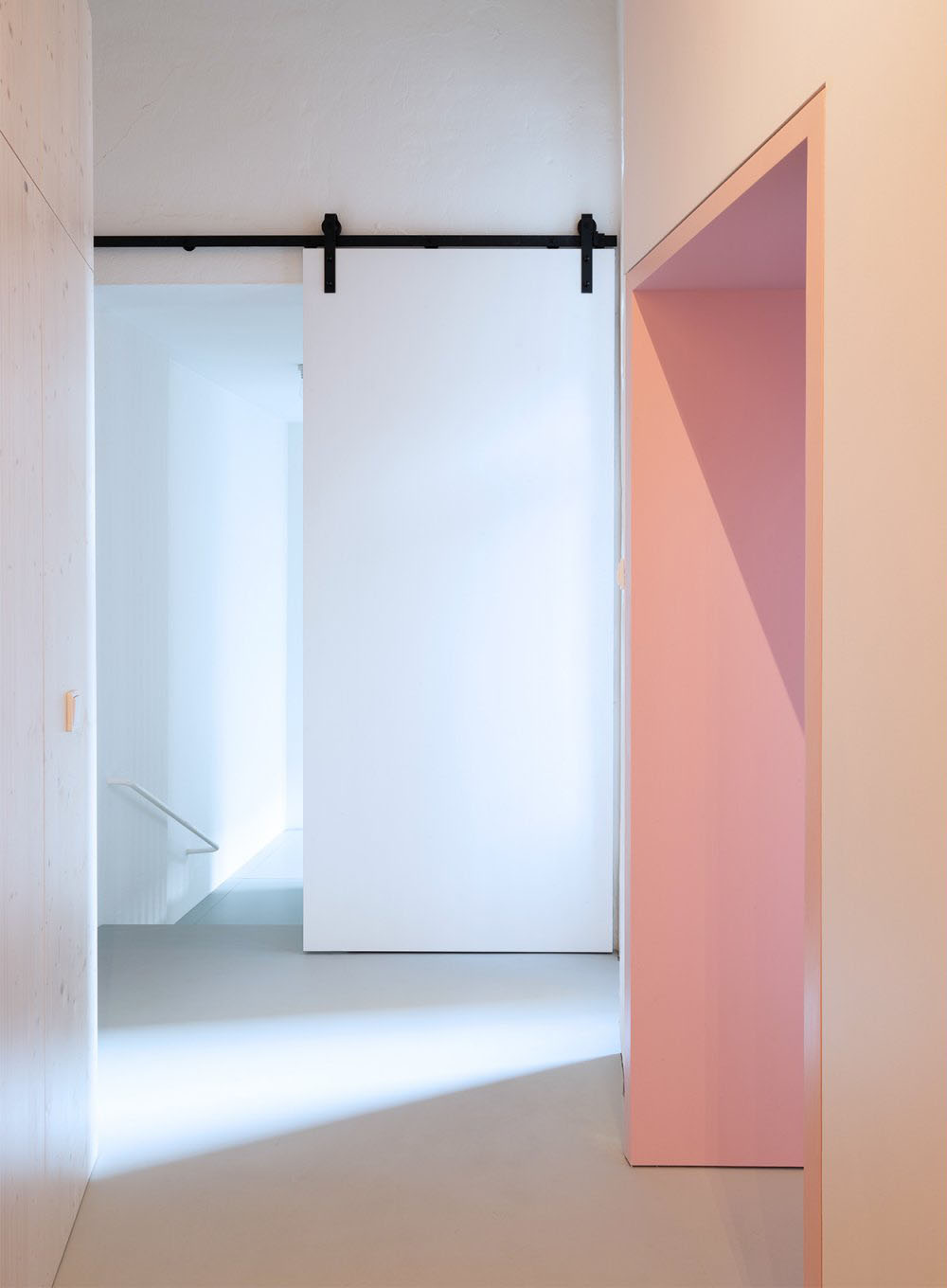 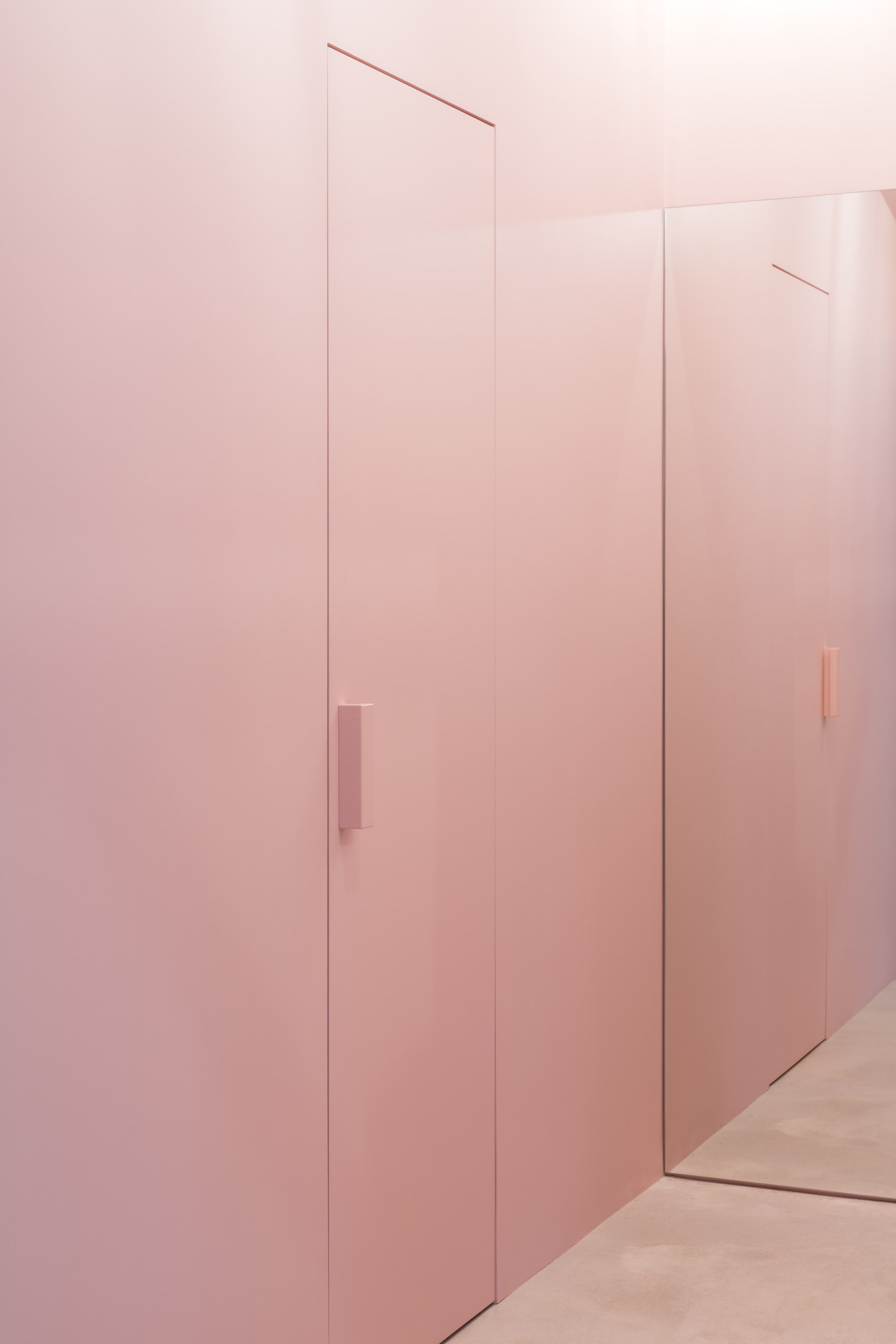 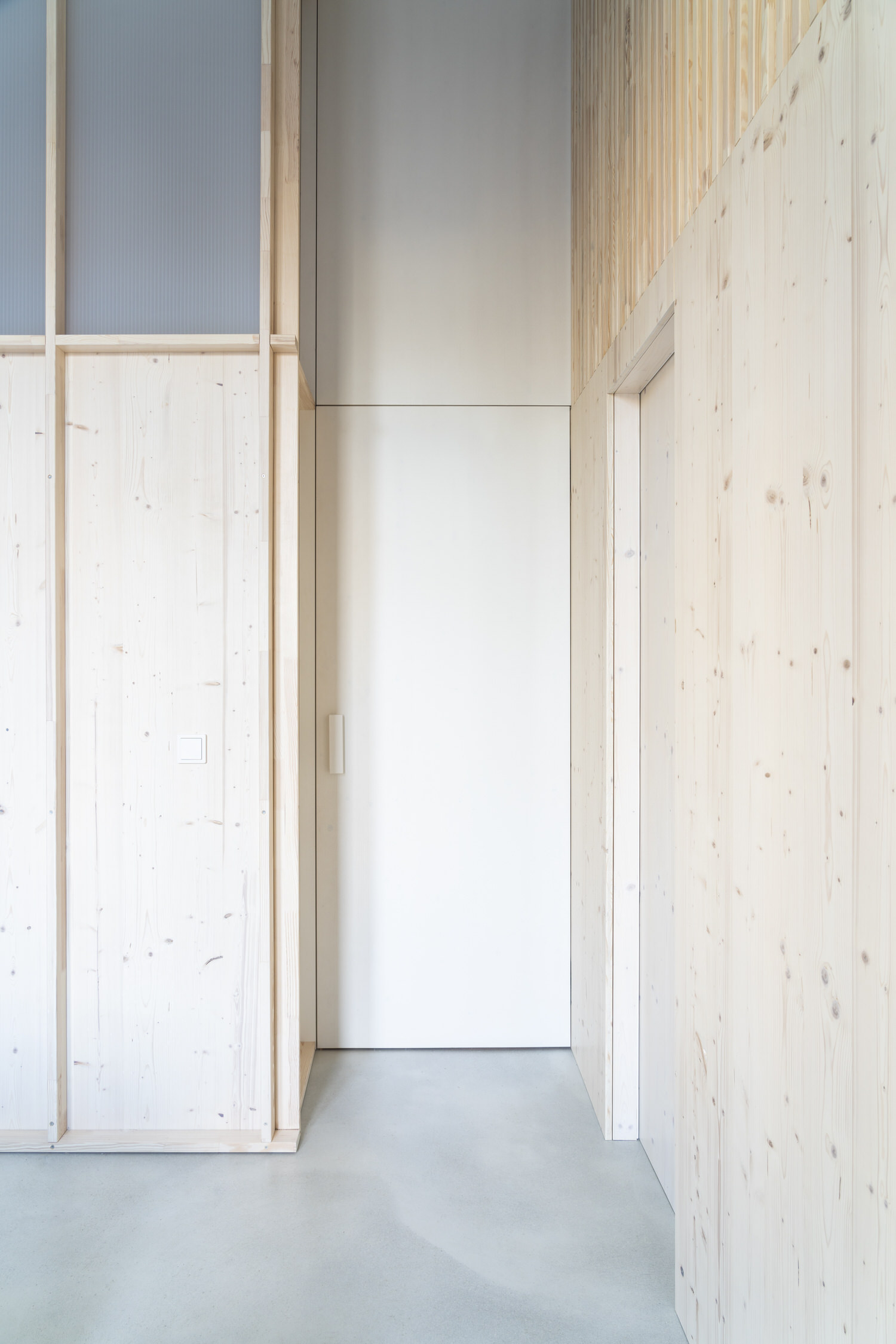 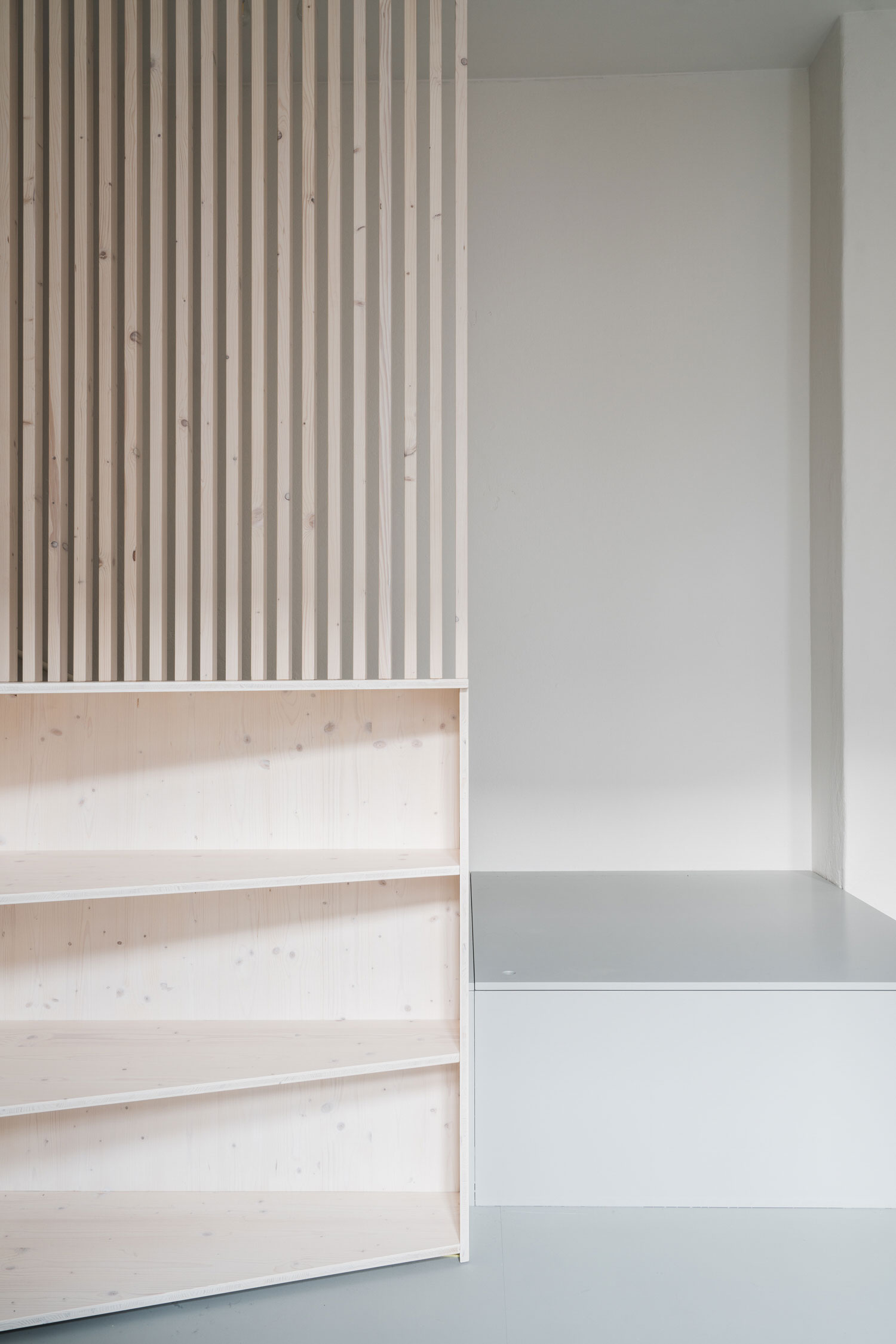 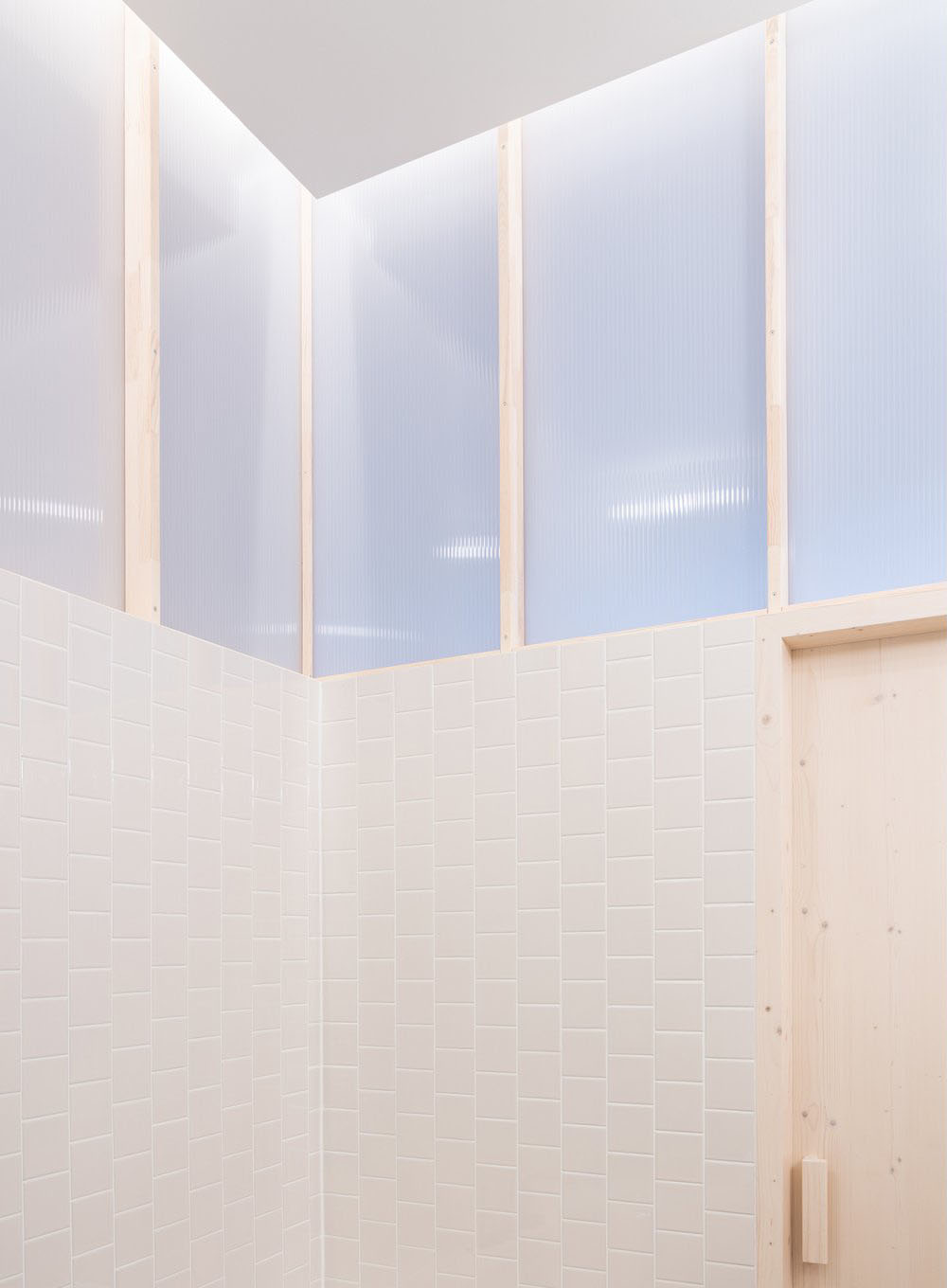 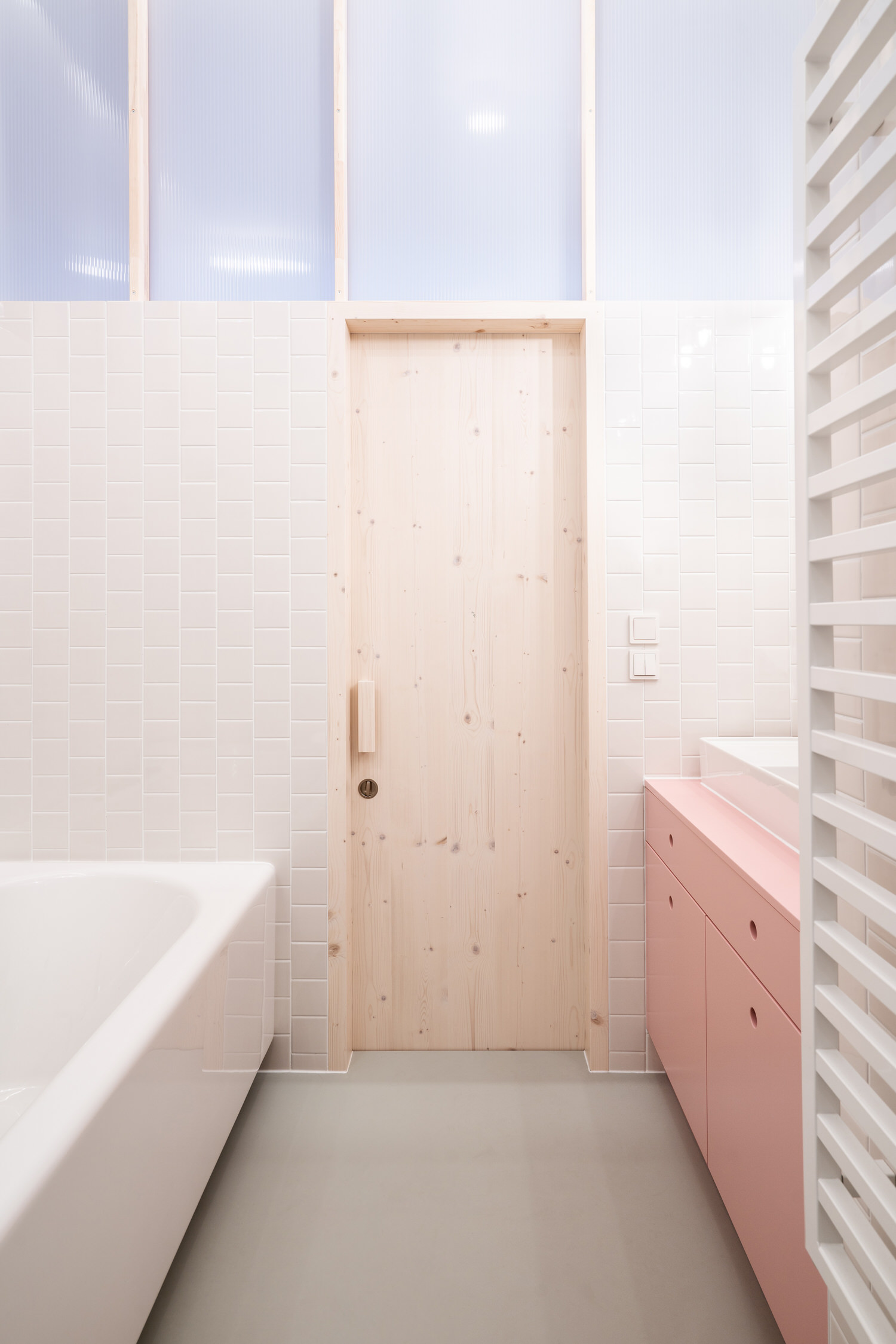 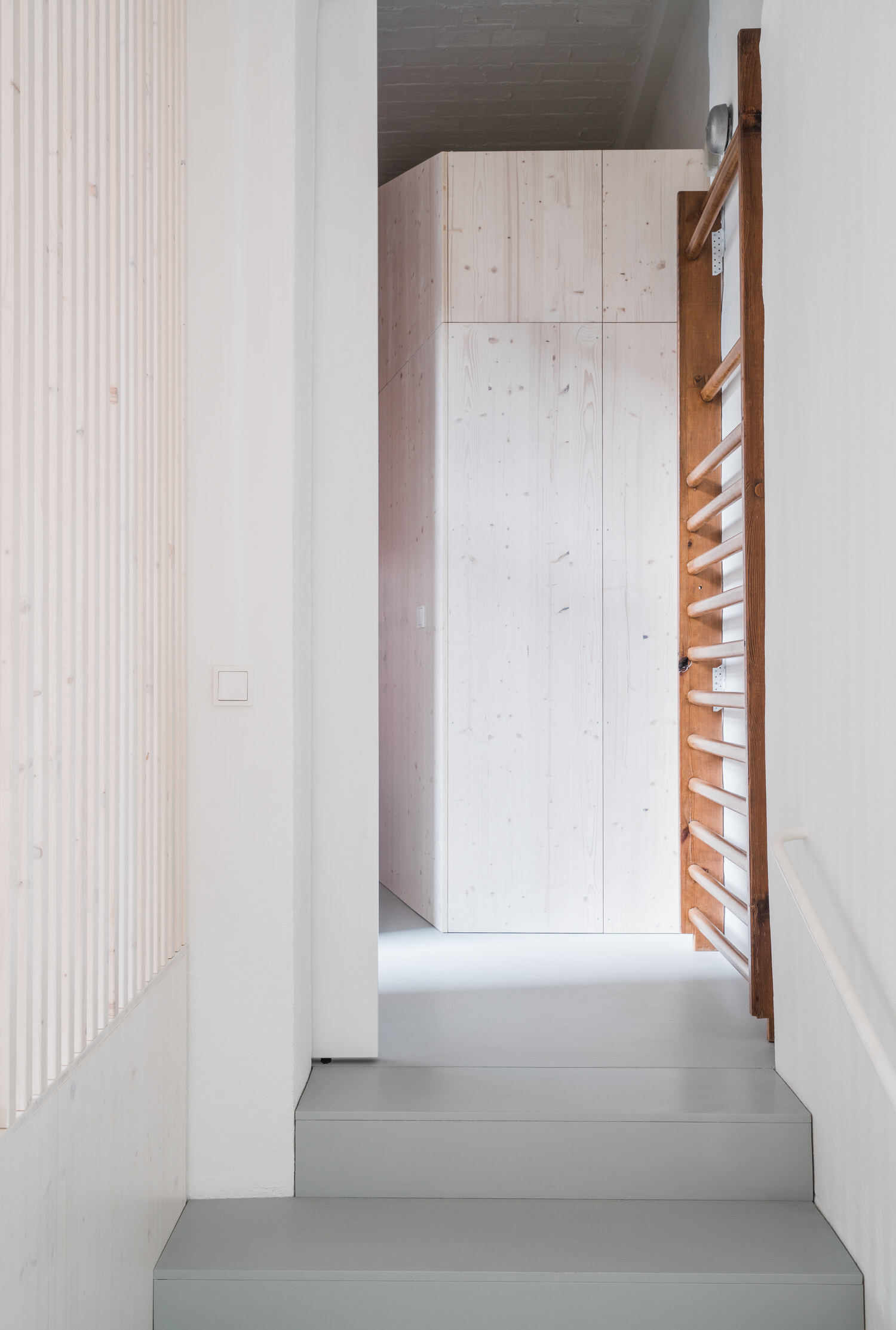 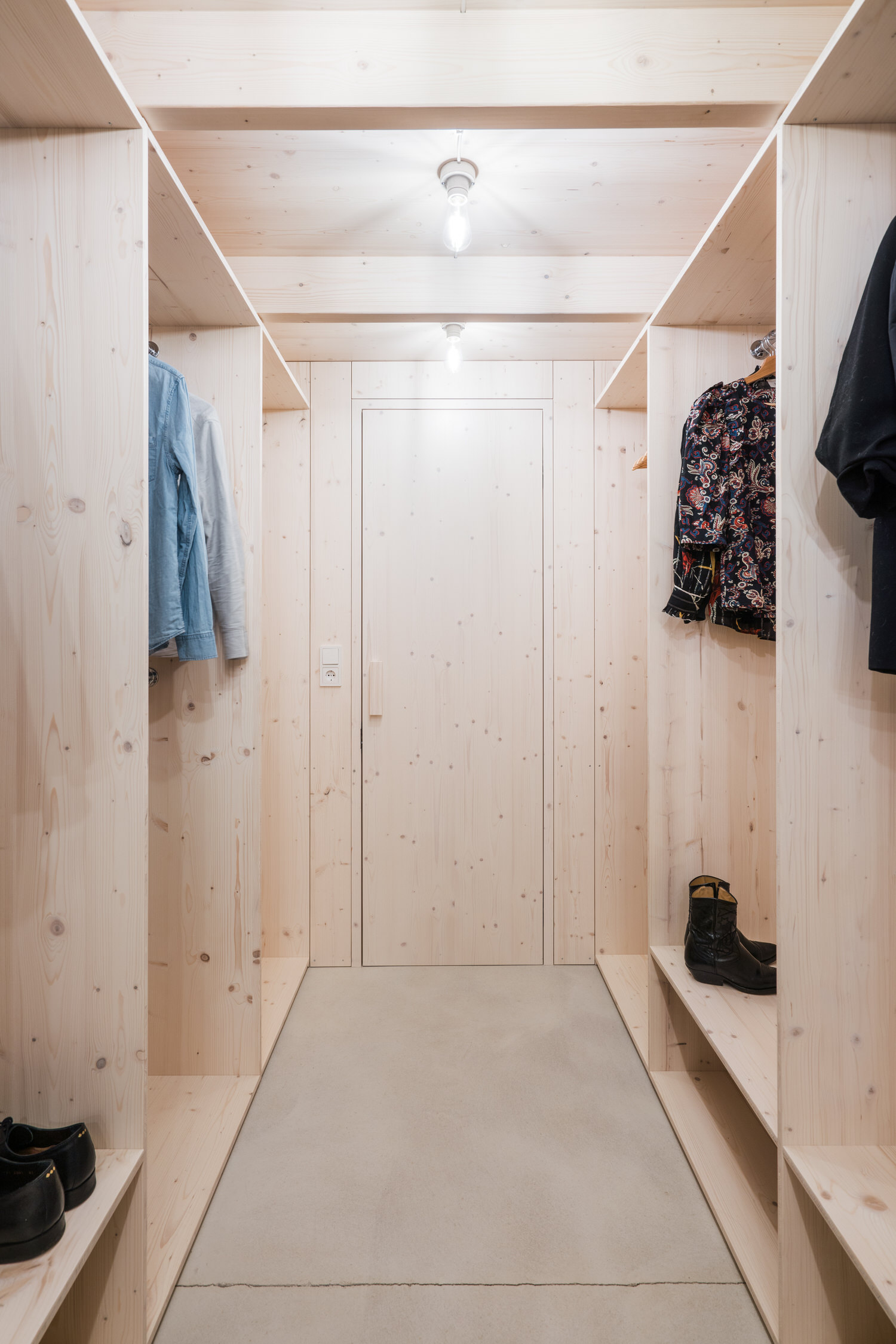 As for the interior, I’m resisting the urge to hashtag the interior with Accidentally Wes Anderson, given the colours and angles alluding to a possible crossover between the façade of Anderson’s famed The Grand Budapest Hotel and Moonrise Kingdom’s tents and lakes. SCH52 is spilled with creamy Neapolitan ice cream colours, carefully layered onto the existing black cast-iron pillars. Existing exposed brick and concrete walls along with timber ceiling are only retouched in white.

Curated on the untouched concrete floor are white stained ply kitchen cupboards, fairy-floss pink carpentry with a peachy glow paired with Moritz Bannach’s pink dining table, and a touch of frosted blue from the polycarb skylight panels. A tasty but ‘restrained’ combination that makes dated scenes contemporary and fresh.

Against the playful and distinctively geometric space, I envy the family living in this Berlin loft. I imagine the excitement of coming home to a respectful intersection between old and new, with subtle but luscious layers of youthful introductions. Running my hands against the smooth and rough textures while playing hide and seek with the layered elements and admiring the compartmentalised programming – home sweet home, indeed.

END_OF_DOCUMENT_TOKEN_TO_BE_REPLACED

| The article SCH52 Loft in Berlin by Batek Architekten. appeared first on Yellowtrace. |

Which F1 team has the best driver line-up for 2021? | Debates and Polls