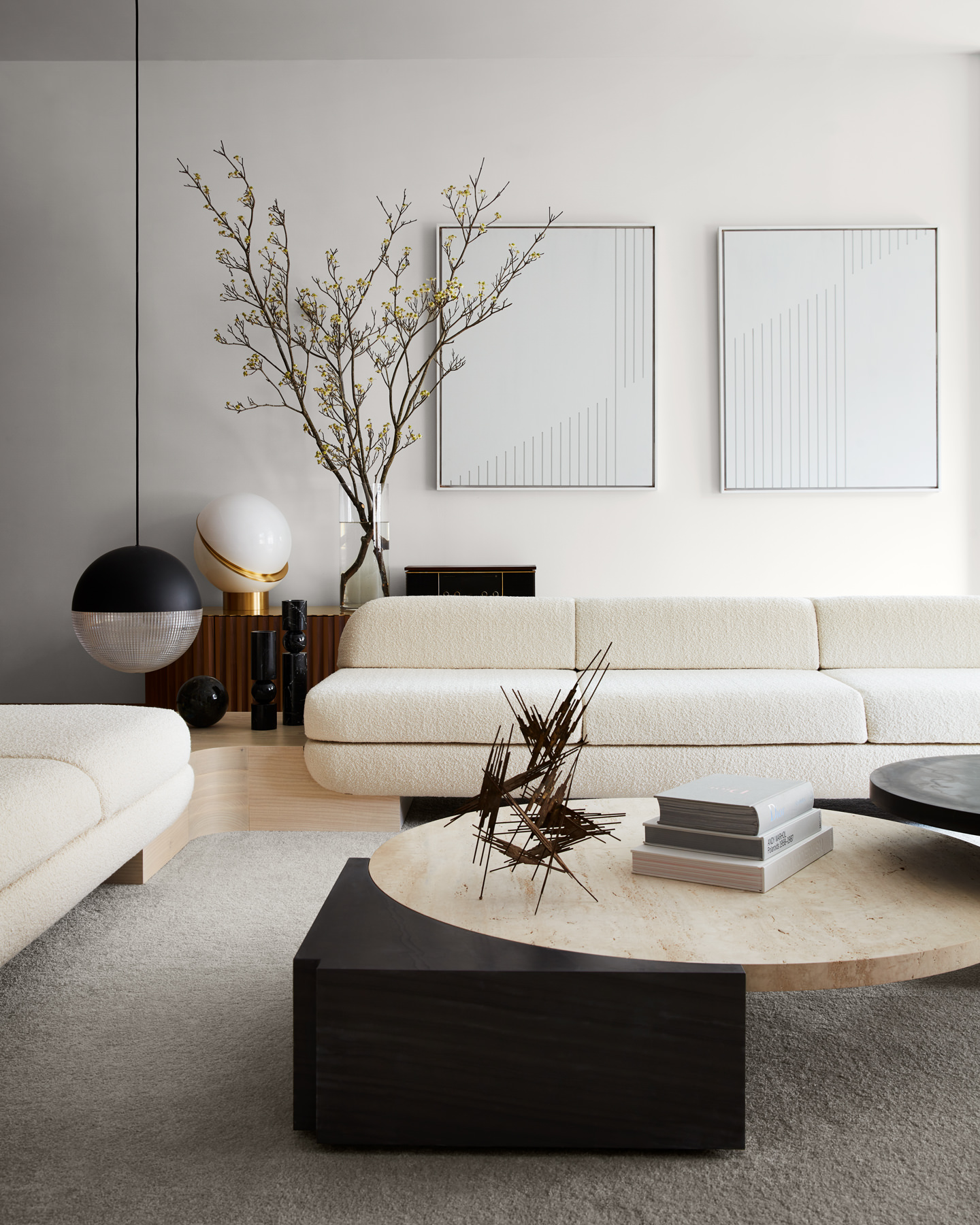 The living room welcomes guests into a calm monochromatic space, with accents of brushed brass, gunmetal and matte black. A variety of Lee Broom lights including Carousel XL in polished gunmetal, Lens Flair pendant in matte black, and Crescent table lamp feature in the space. 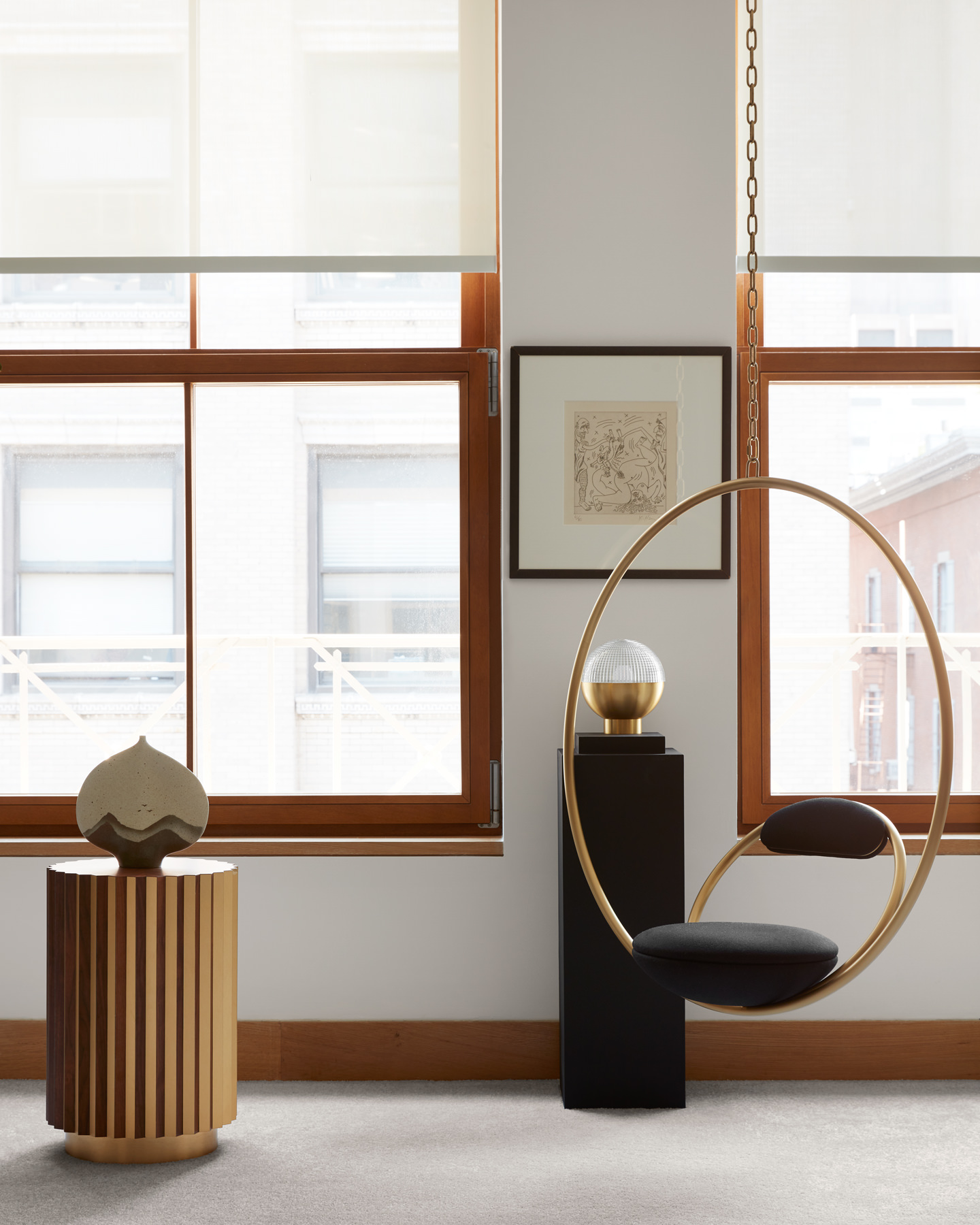 A Hanging Hoop Chair Designed by Lee Broom floats gently in the space, in brushed brass and black Kvadrat wool. This chair was made famous in 2020 when Beyoncé swung from it in her latest visual album and film ‘Black is King’. Beyoncé then bought the chair for her home. 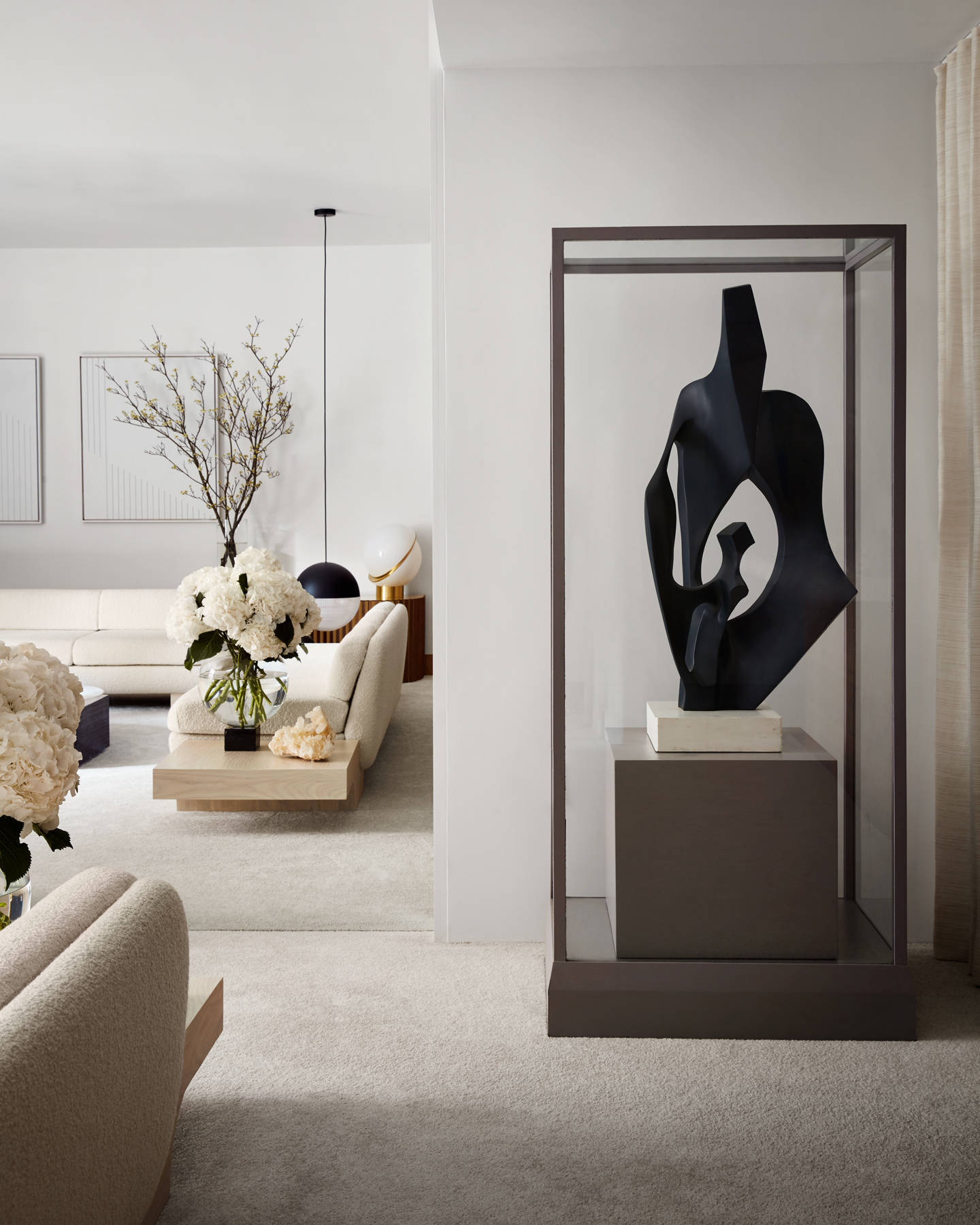 The large sculpture in the glass display case is a mid-century piece purchased by Broom specifically for the apartment and depicts a mother and child. The display case is an original Victorian vitrine that Broom used in his  2015 Milan Design Week exhibition ‘The Department Store’. 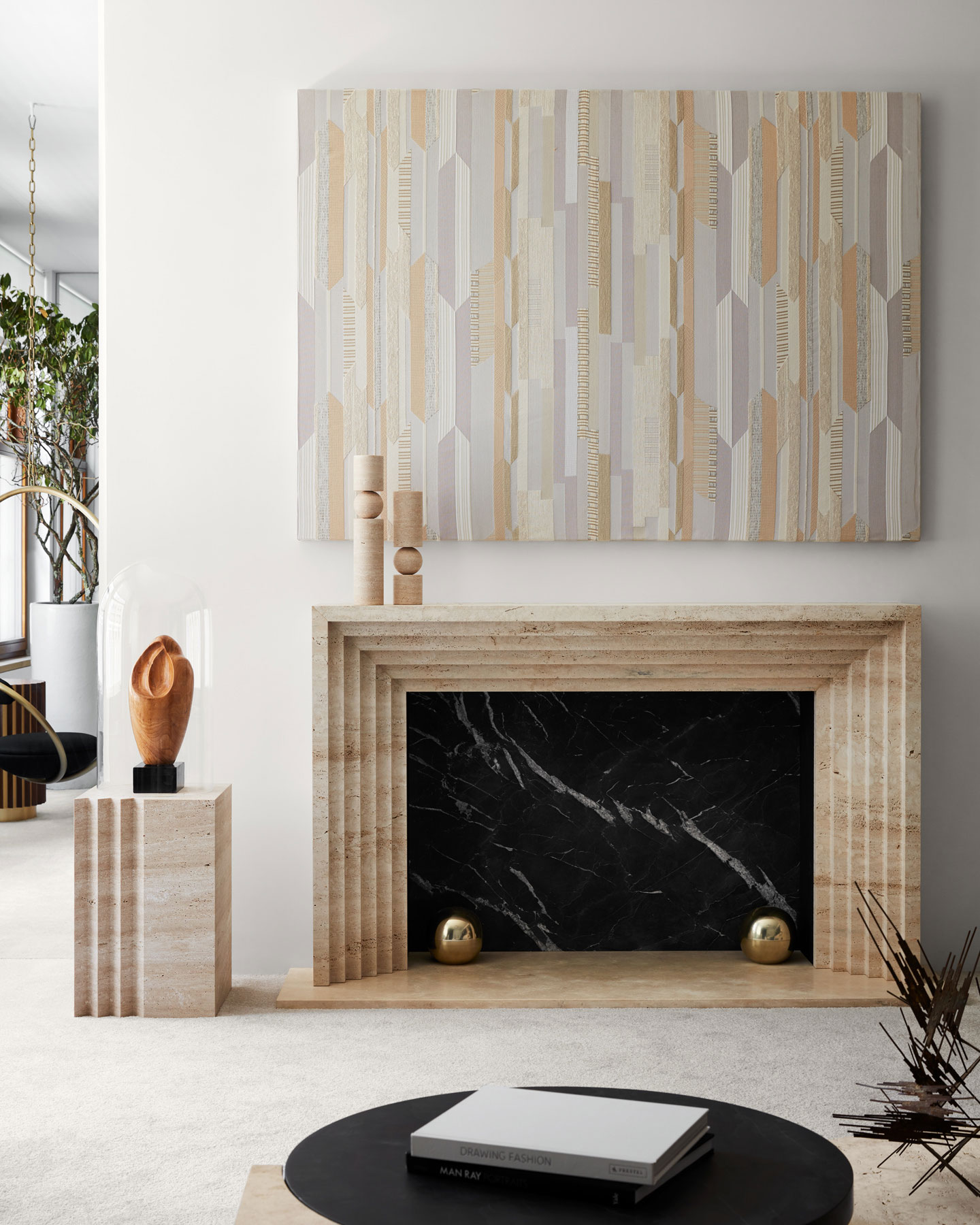 A bespoke fireplace specifically designed for the space by Lee Broom has been carved from Travertine in Italy in a stepped formation design, inspired by the brutalist architecture of the Long Lines skyscraper, one of Lee’s favourite buildings in New York visible from the living room. 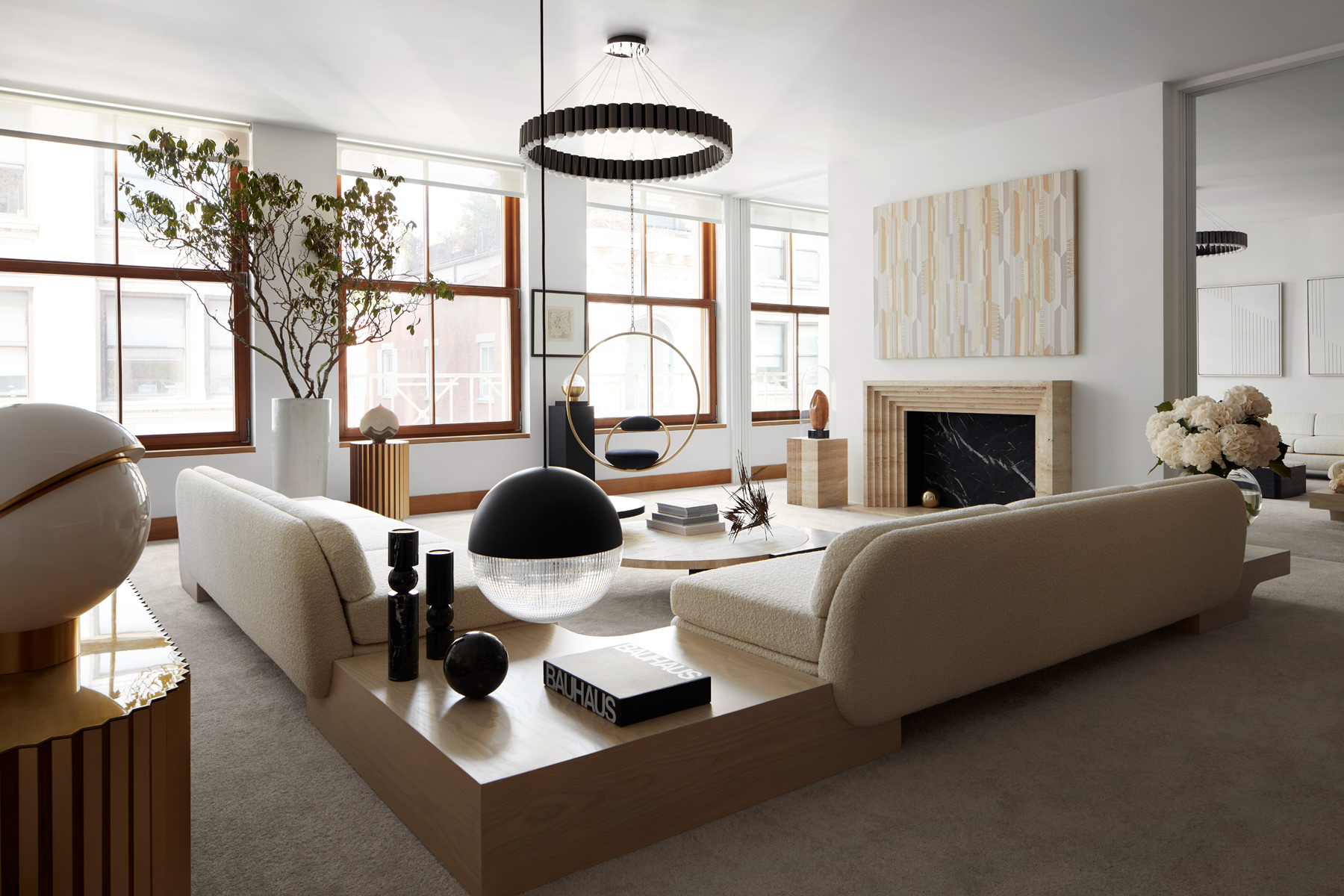 The room’s focal point is the new White Street sofa designed specifically for this environment. Highlighting Broom’s long-held fascination with symmetry and seamlessness, this architectural, streamlined, modular piece can be arranged in multiple configurations and is effortlessly connected by sculpted armrests, corner or side tables each produced in black or white ash. 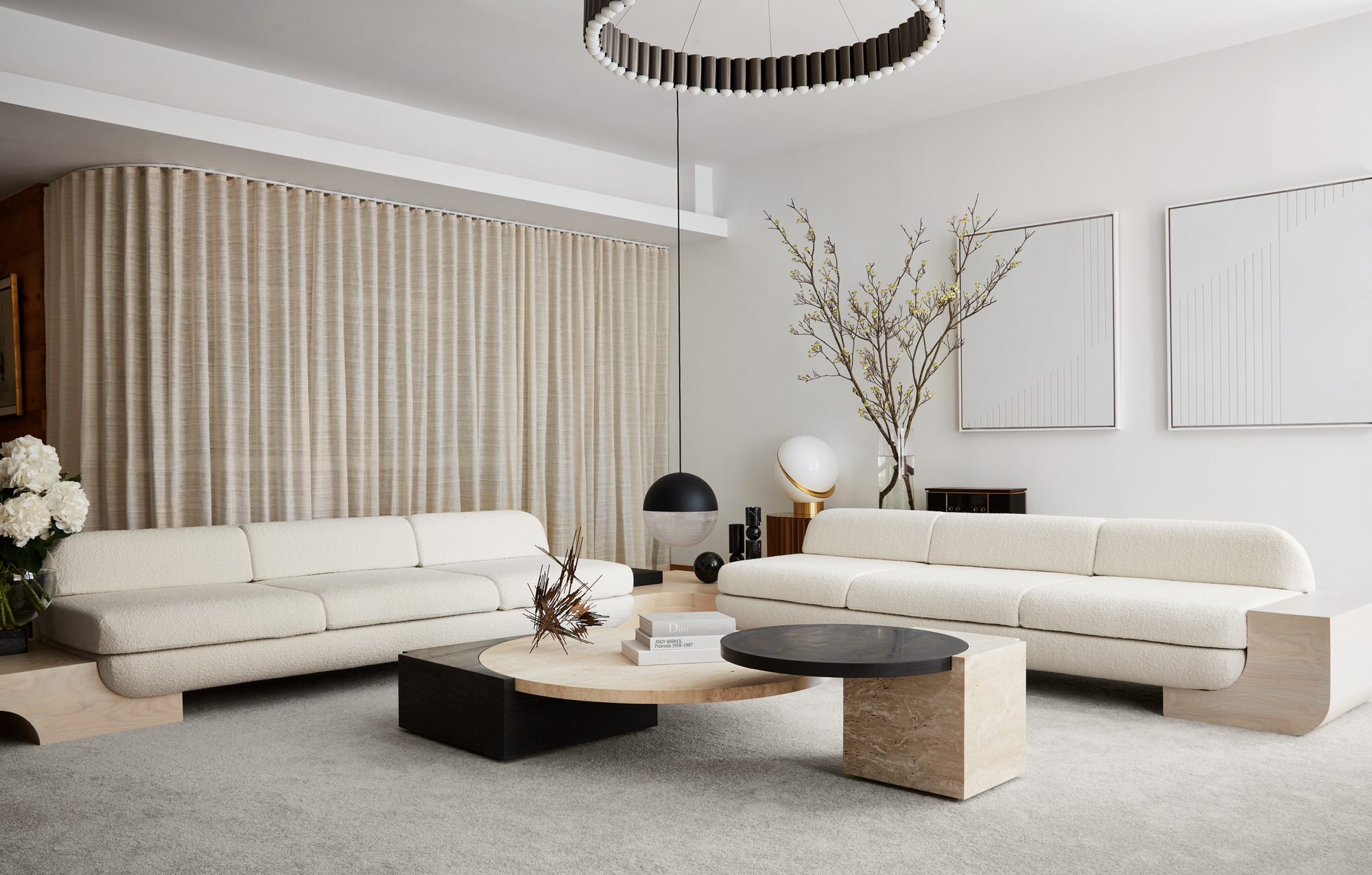 Also showcased in this room: the new Tribeca Tables, a series of sculptural side and coffee tables, which mirror the same floating concept as the sofa, appearing to defy gravity. Crafted in black silk marble and travertine with a stepped detail that reflects the soaring local architecture, its smooth round tabletop cantilevers over a monolithic square base, balancing perfectly.

After 14 years in the industry, Lee Broom has become a reference in the world of lighting and furniture design. Originally from the U.K., Broom is still based in England but his renown has transcended borders. His career, however, initially started in fashion, an experience that continues to nurture his style.

After graduating with a fashion design degree from Central Saint Martins in London, Broom worked for legendary designer Vivienne Westwood. But he truly found an avenue for expression in his eponymous company and brand, launched in 2007. Since then, he has designed, manufactured and retailed over 100 furniture, accessory and lighting pieces under his name, in addition to collaborating with brands such as Christian Louboutin, Mulberry, Bergdorf Goodman and Wedgwood. Each one of his creations reflects a classic aesthetic with contemporary and unexpected edges. 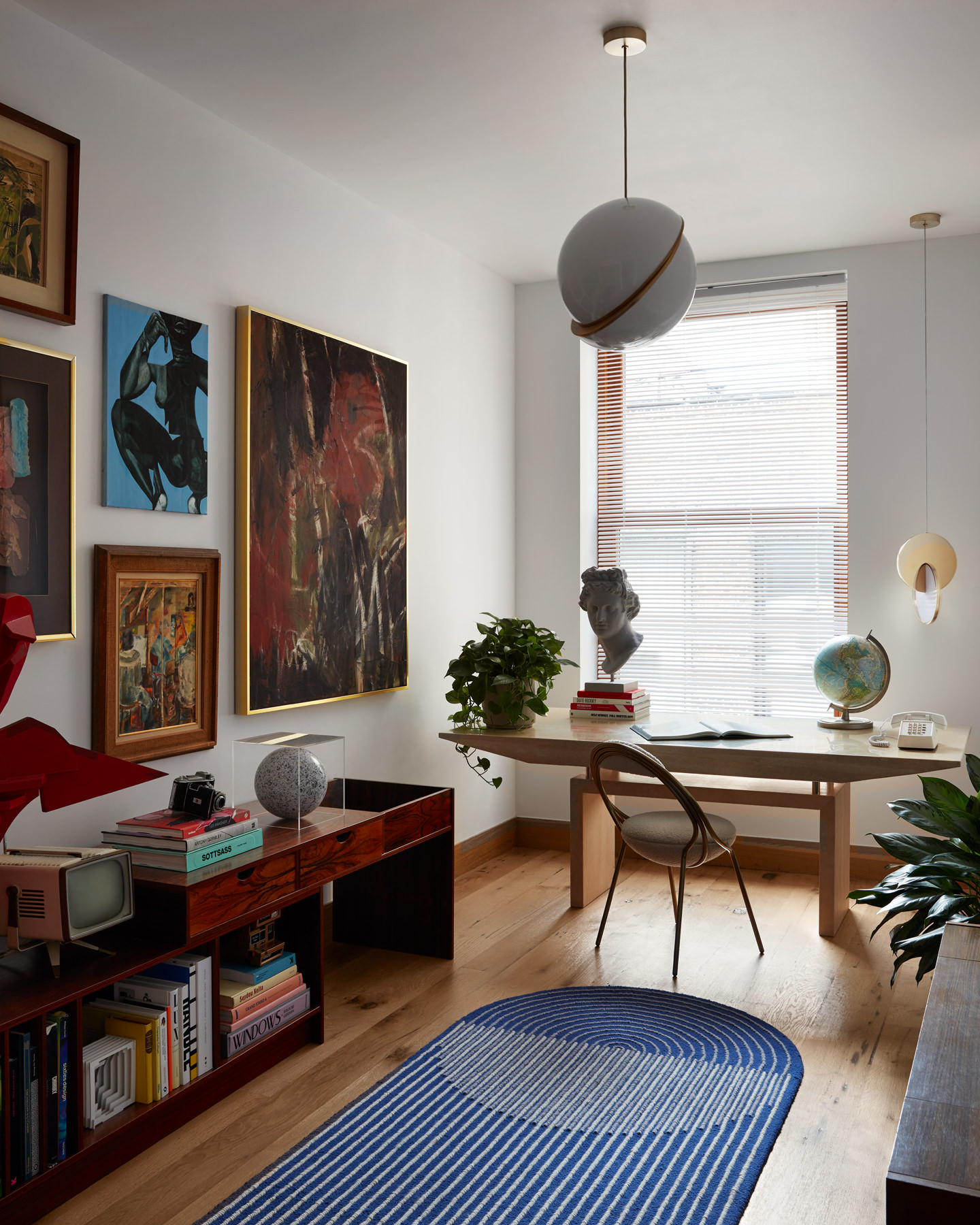 In Broom’s private study, the designer has installed several works from his personal art collection, including an original leather jacket owned by the artist Keith Haring with a signature artwork painted on its back. The desk in the Study is an 80s Italian piece made from Travertine. The bust of David is also a vintage piece used in Broom’s 2019 exhibition ‘Park Life’ in Sydney. 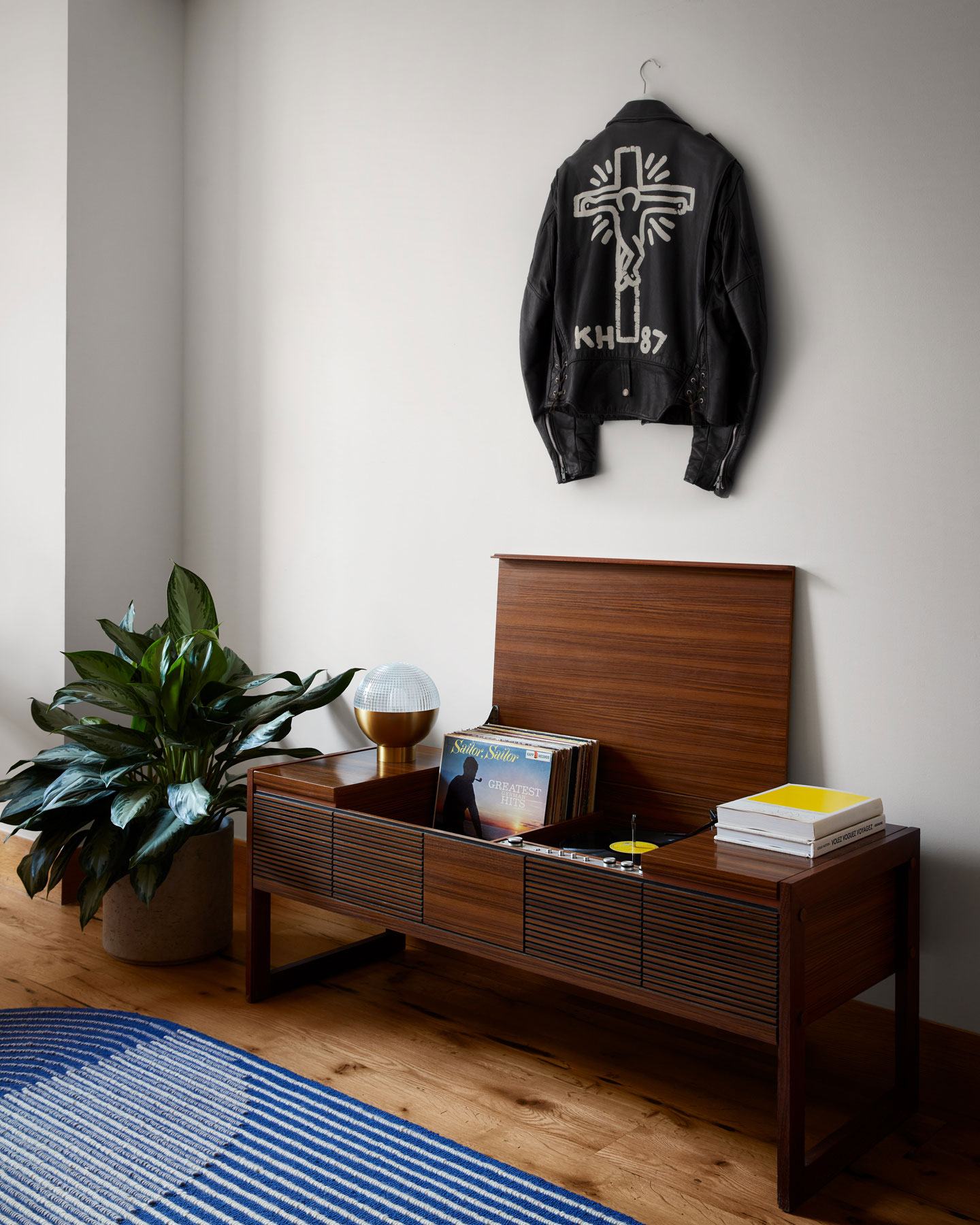 Keith Haring owned the jacket and then as a gift to his partner before he died, he did a painting on the back of it. Lee bought it in a gallery in Philadelphia 15 years ago as it seemed like such a unique and personal piece of art. As far as Lee knows, he painted only a few of these jackets one of which he did for Madonna in the 80s. The record player Lee bought in Brighton when he was young for £50. 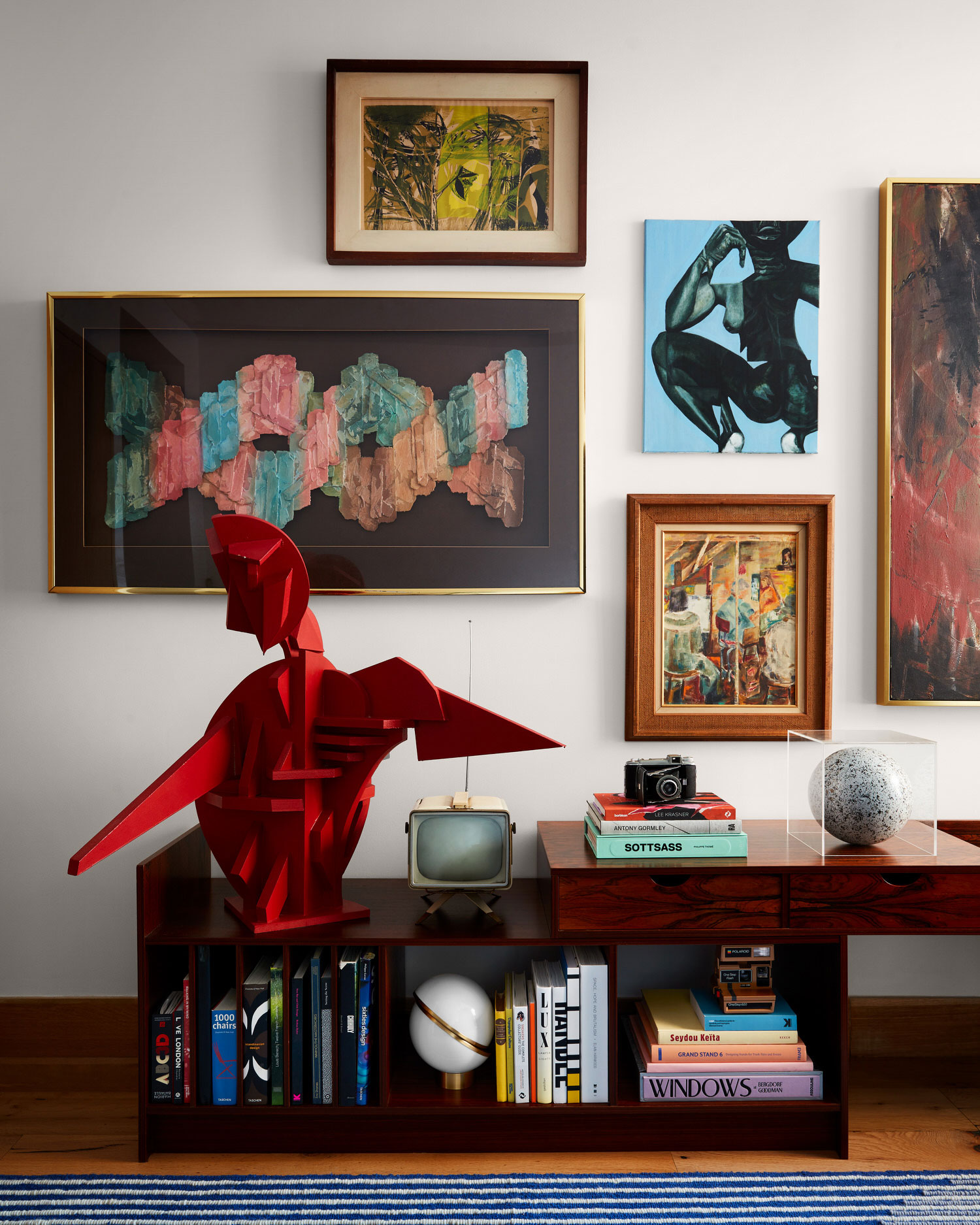 The blue painting of the portrait in the centre of the cluster of artworks is by Shirley Amartey, an artist and fashion stylist who paints self-portraits. The painting was specifically commissioned for the Penthouse study. Other paintings on this wall are all mid-century vintage pieces which Lee has collected over the years. The linear rug which complements the blue for the painting is by Gan Rugs. 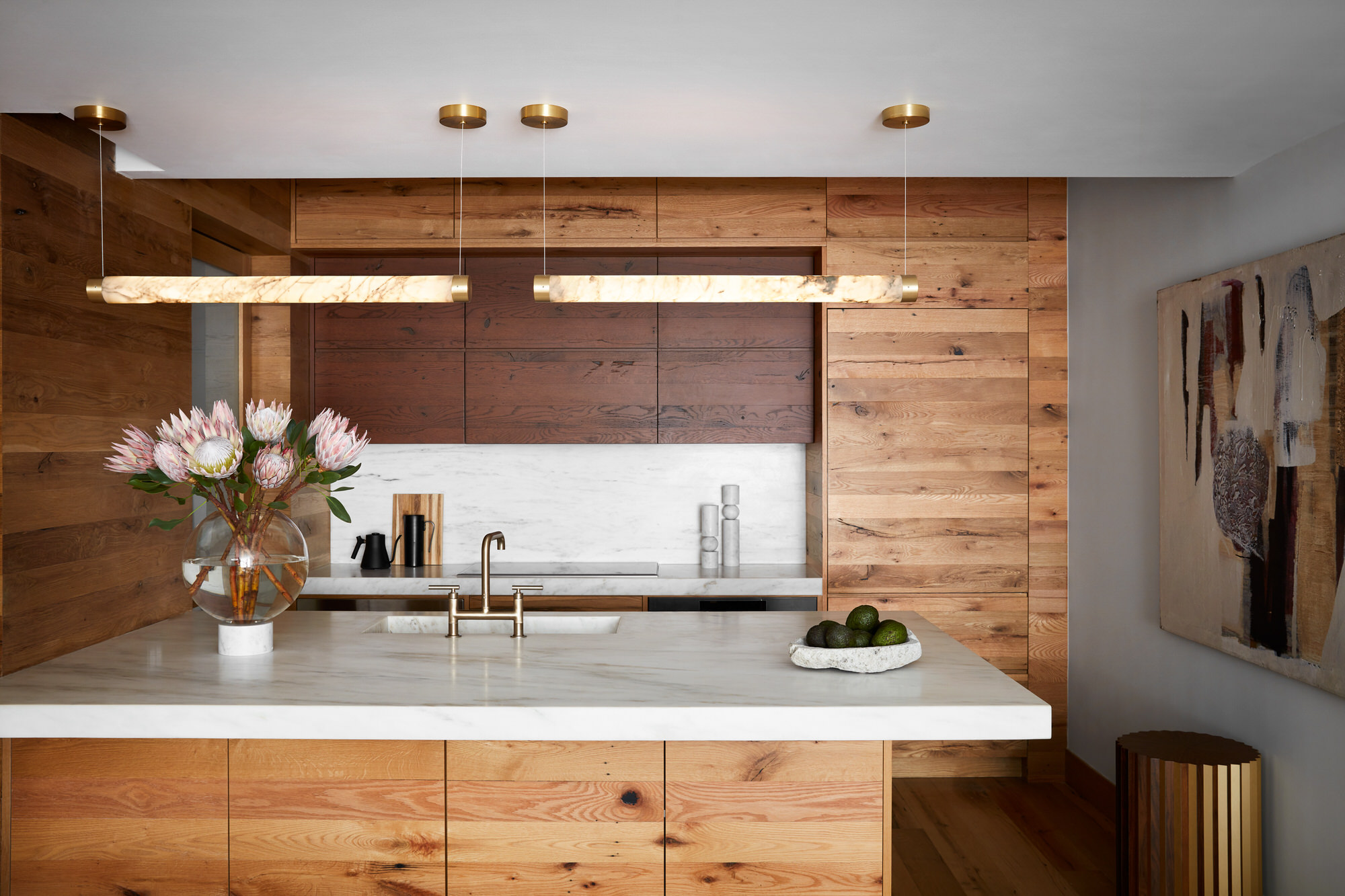 The kitchen includes two Lee Broom Tube Lights created from Carrara marble and brushed brass. ‘Podium Vase’ by Lee Broom features a glass globe balancing on a white Carrara marble base. All the wood in the Kitchen is reclaimed oak and is over 300 years old. Keeping with the importance of sustainability of the penthouse, the marble is from Vermont in the USA, the largest underground marble quarry in the world. 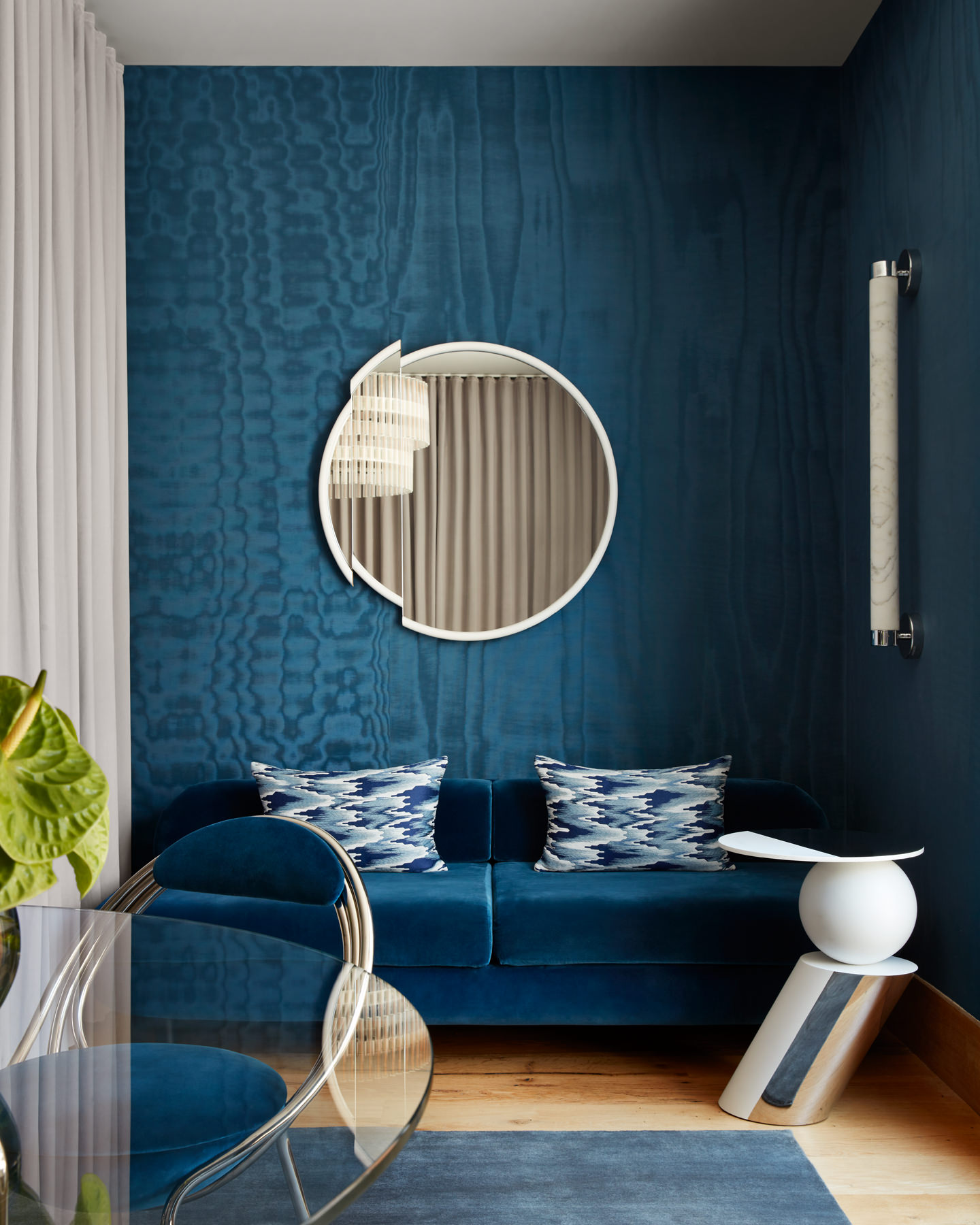 Looking out to a grand terrace with spectacular views of One World Trade is the dining room. Deep blue moiré walls, grey velvet pleated drapes with polished and brushed stainless steel add a sense of drama. The mirror is called Split Mirror, designed and produced by Lee Broom. This particular version was a limited-edition piece in white created for the 2017 Milan exhibition ‘Time Machine’. The white and chrome table also by Broom is called the Drunken Side Table. 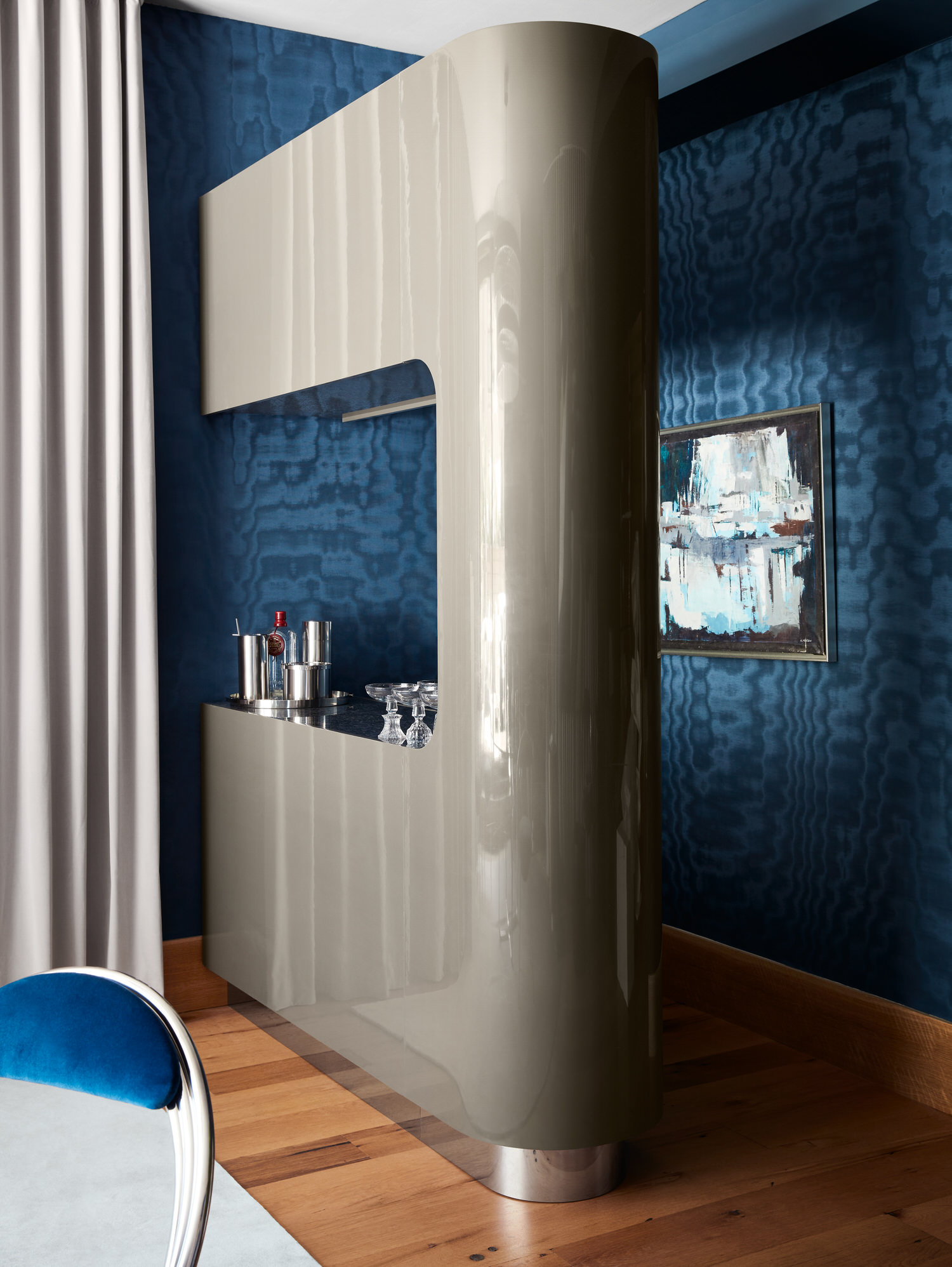 As part of Lee Broom’s growing personal collection of vintage pieces and art seen around the property, an original 1980s custom bar designed by Steve Chase for the Chase Residence in Laguna Beach is an elegant reminder that this is a space meant for refined entertaining. The cocktail set is an original Arne Jacobsen collection called Cylinda Line by Stelton.

With offices in New York City, Broom needed a pied-à-terre for when he is in town. The project came to fruition when the designer discovered a duplex apartment located in a White Street building in the Tribeca neighbourhood, in the heart of Manhattan. This historical structure has been sustainably reimagined, with 80% of the materials having been reclaimed or restored.

Accessible by a private elevator, Broom’s 280-square-metre penthouse occupies the fifth and sixth floors. Filled with natural light thanks to expansive high ceilings and large windows — which meet passive house environmental airtight requirements — the space features 300-year-old hand-restored, reclaimed wooden details. It comprises a living room, a dining room, two kitchens, two bedrooms, a dressing room, a study and two terraces — one of which has spectacular views of One World Trade Centre, while the master bedroom offers a unique panorama of the Empire State Building. 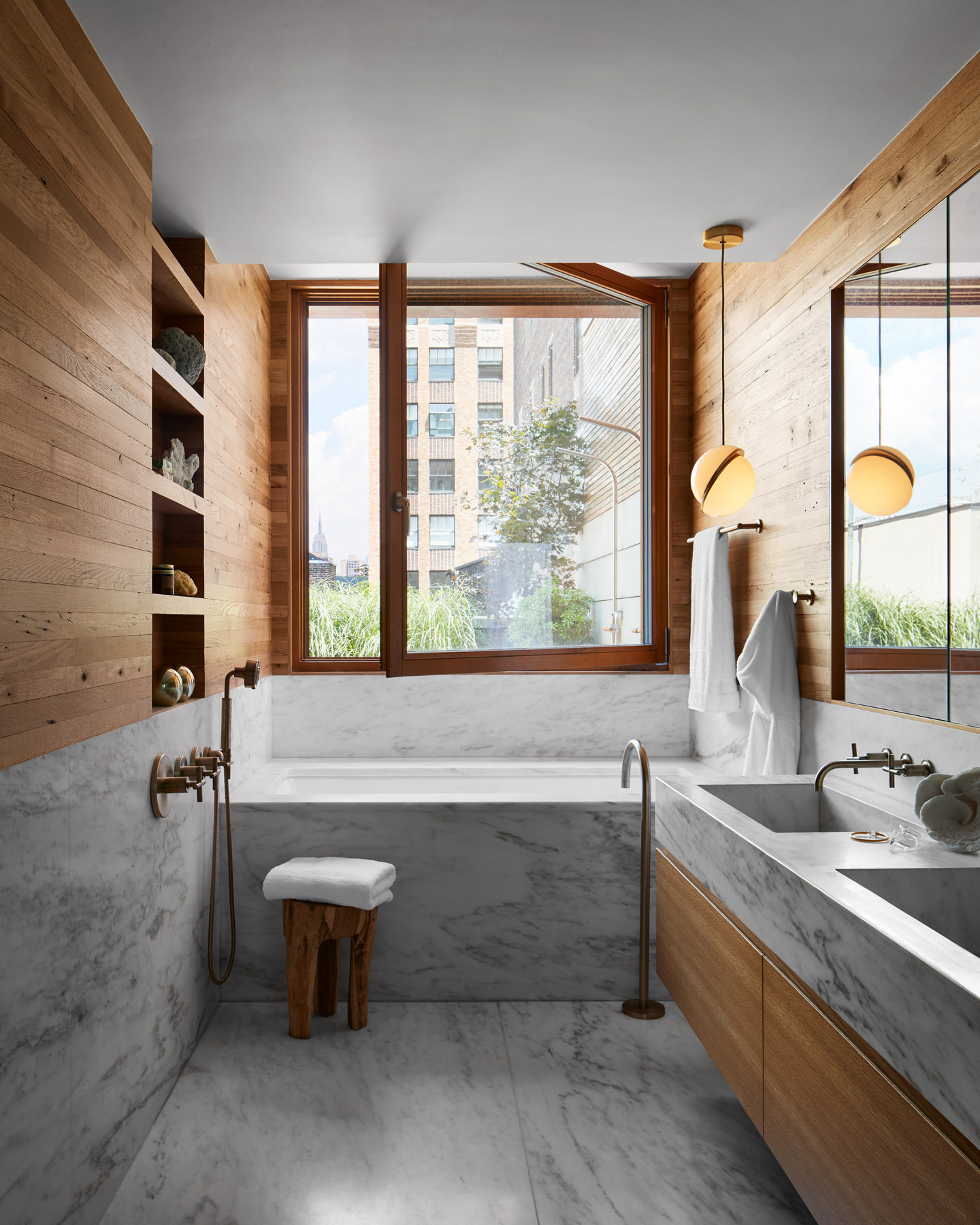 The master bathroom includes a Lee Broom Mini Crescent light. All the marble is sourced from the Vermont marble quarry. 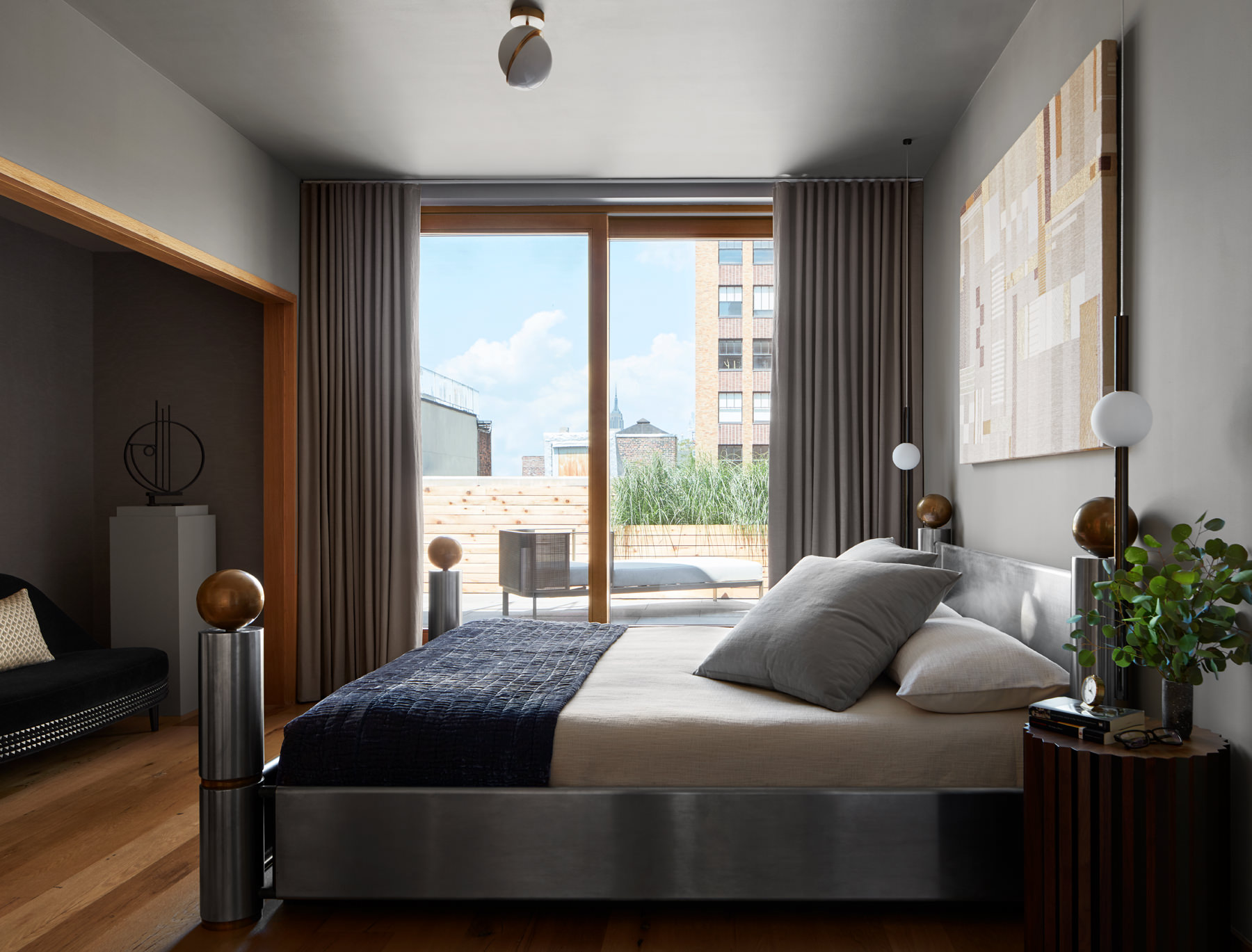 The bed is a stainless and brass turned bed which dates back to the 1960s. Lee bought it from one of the dealers he uses in LA (the same dealer who had the Steve Chase bar in the dining room). Lee was going to use it in the guest bedroom of his London home or possibly for an interior project. It was too large for his home, but he didn’t want to give it up as it has actually inspired some of his work using spheres and columns and so he was really happy to finally use it in the New York penthouse. 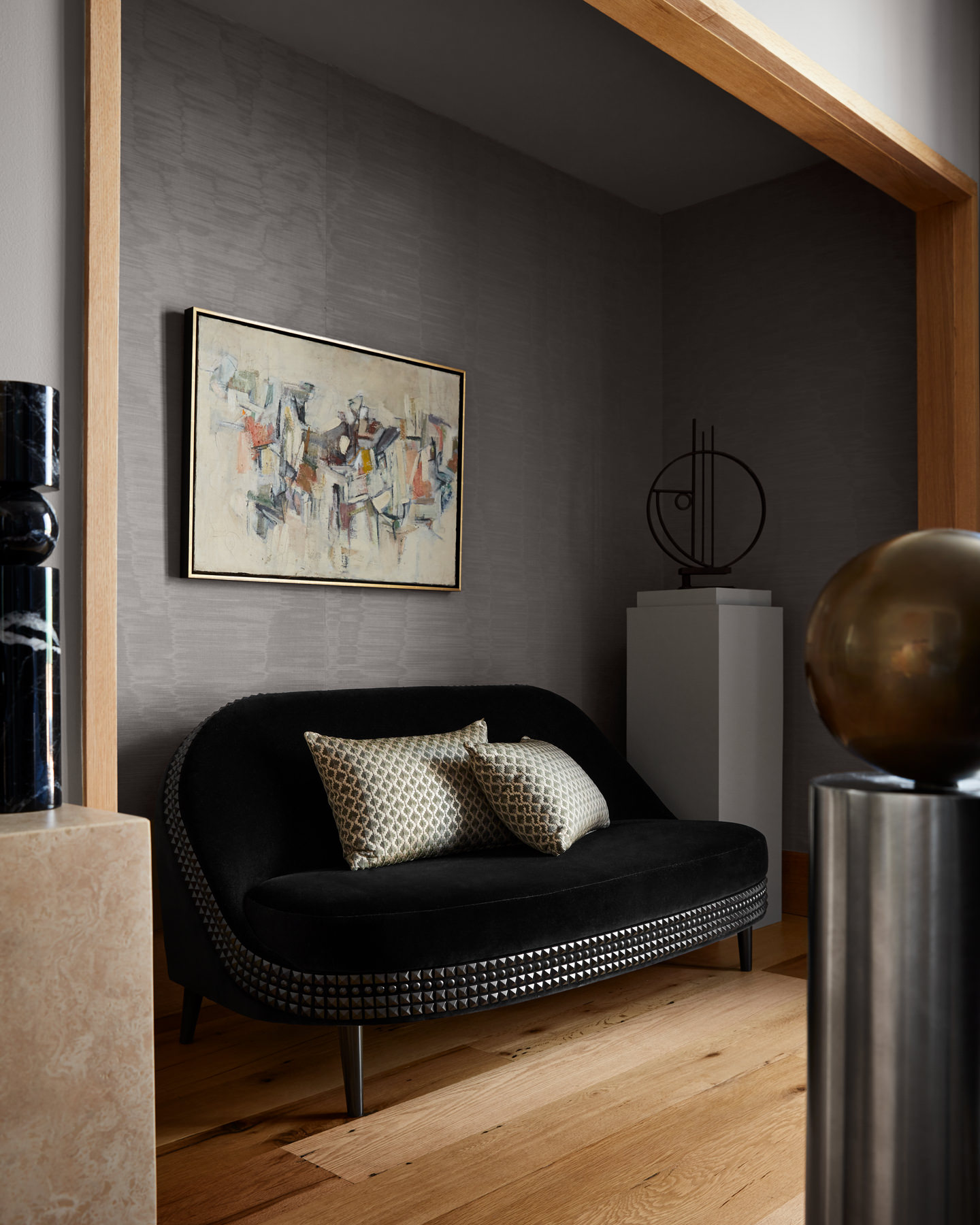 The sofa by Broom is an archived piece from his 2011 collection called ‘Salon’. The wall coverings are from Dedar. 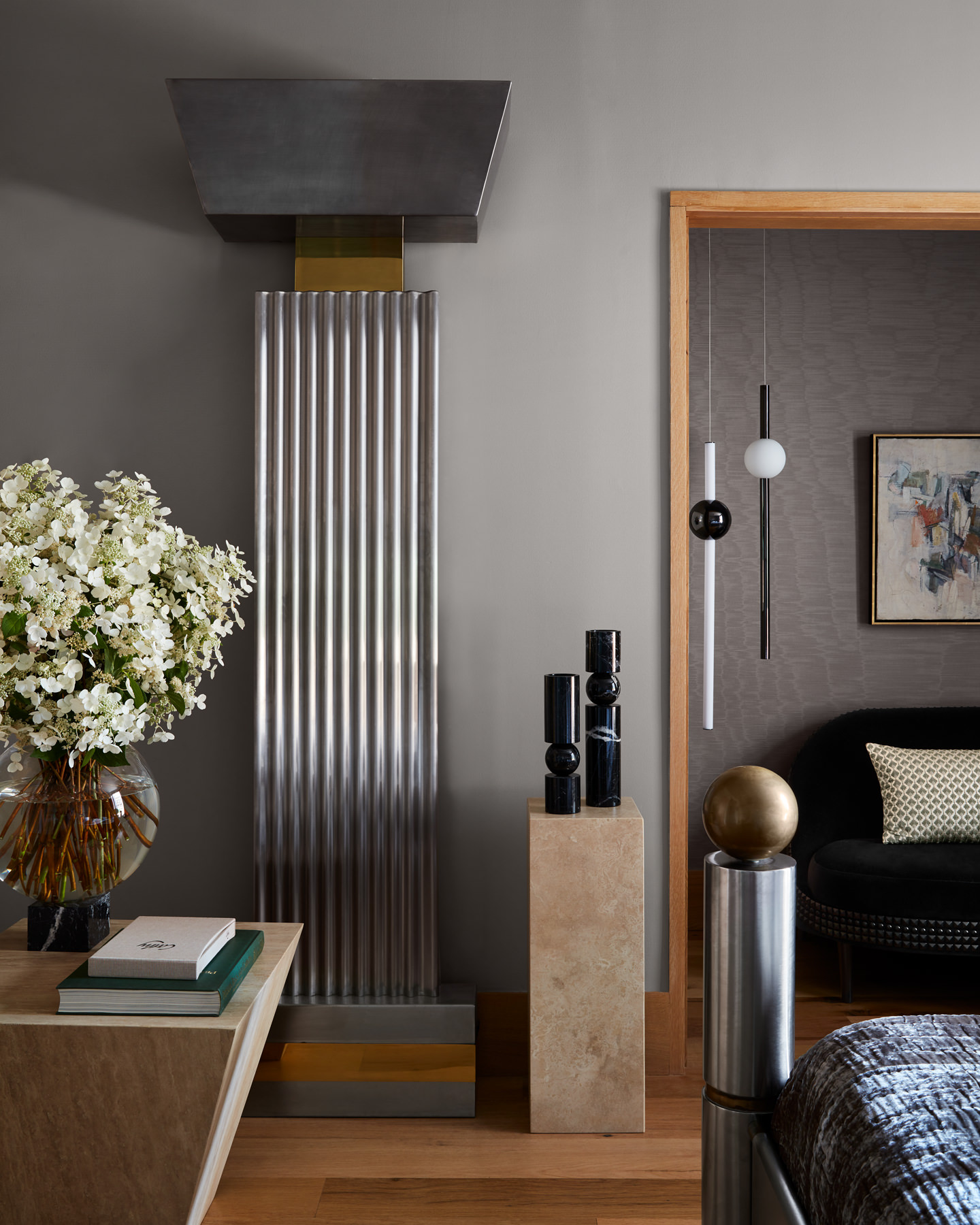 The fluted metal piece is an architectural fixed item that was part of a wall from an interior of a New York Building/skyscraper. It is from the 70s but Art Deco in style. Lee bought it specifically for the Penthouse – unfortunately, the vendor does not know which building it came from but knows it was part of a much larger set of interior fixtures. It was originally a fixed uplighter. Lee put it in the room because the mix of brass and steel went well with the bed and also there is a view of the Empire State Building from the master bedroom and he thought it sat perfectly with that view. The hanging lights are Orion Lights in polished gunmetal by Lee Broom. The travertine plinths are vintage pieces dating back to the late 70s. Also shown are two black Fulcrum Candlesticks by Broom. 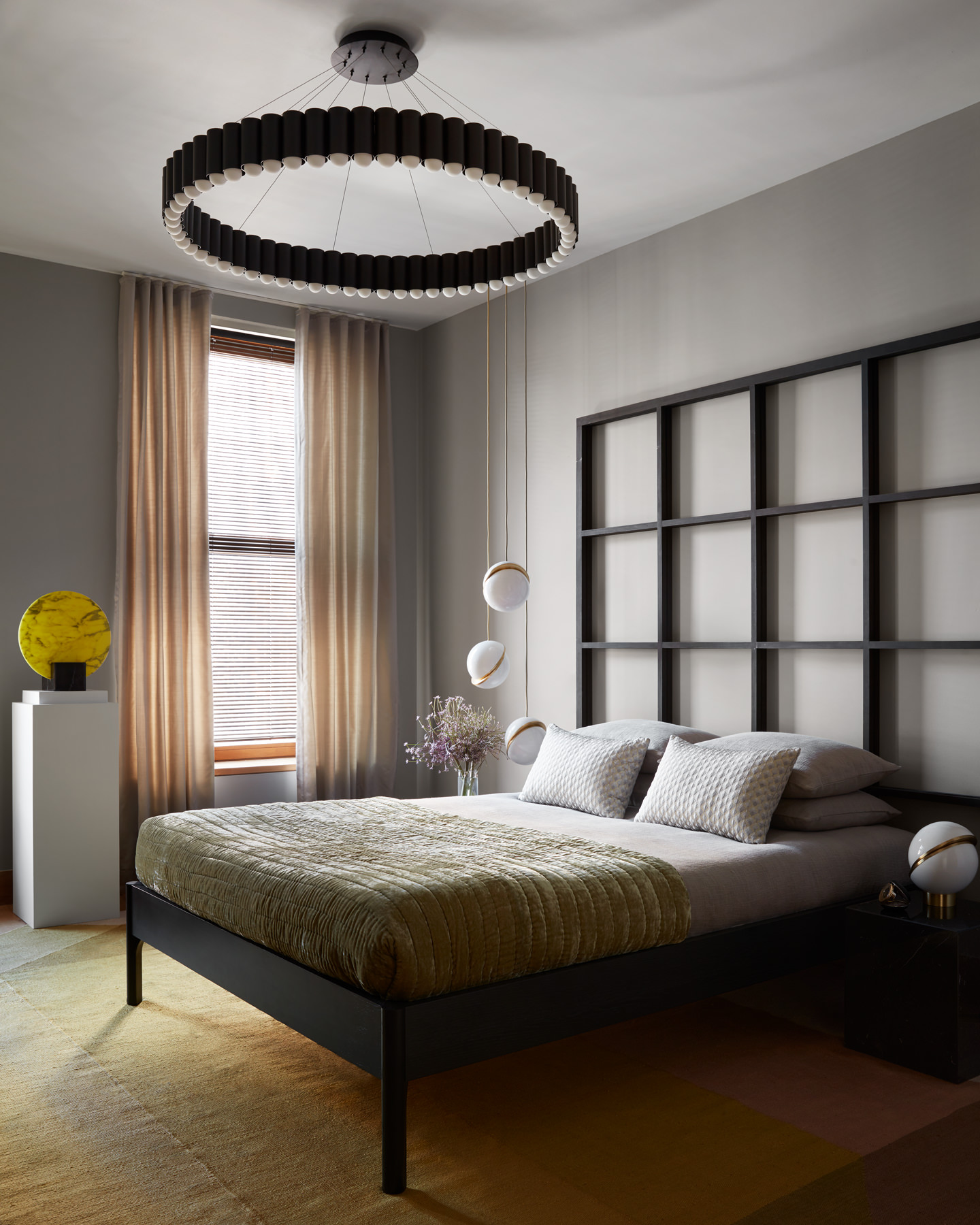 The guest bedroom includes a Carousel XL light in matte black, Acid Marble table lamp and Mini Crescent Chandelier, all by Broom. The yellow and pastel pink rug is by Gan Rugs. The oversized headboard was taken from an exhibition created for the London Design Festival in 2017 called ‘On Reflection’. It is important for Broom to re-use as much as possible from shows and exhibitions meaning that nothing is wasted. 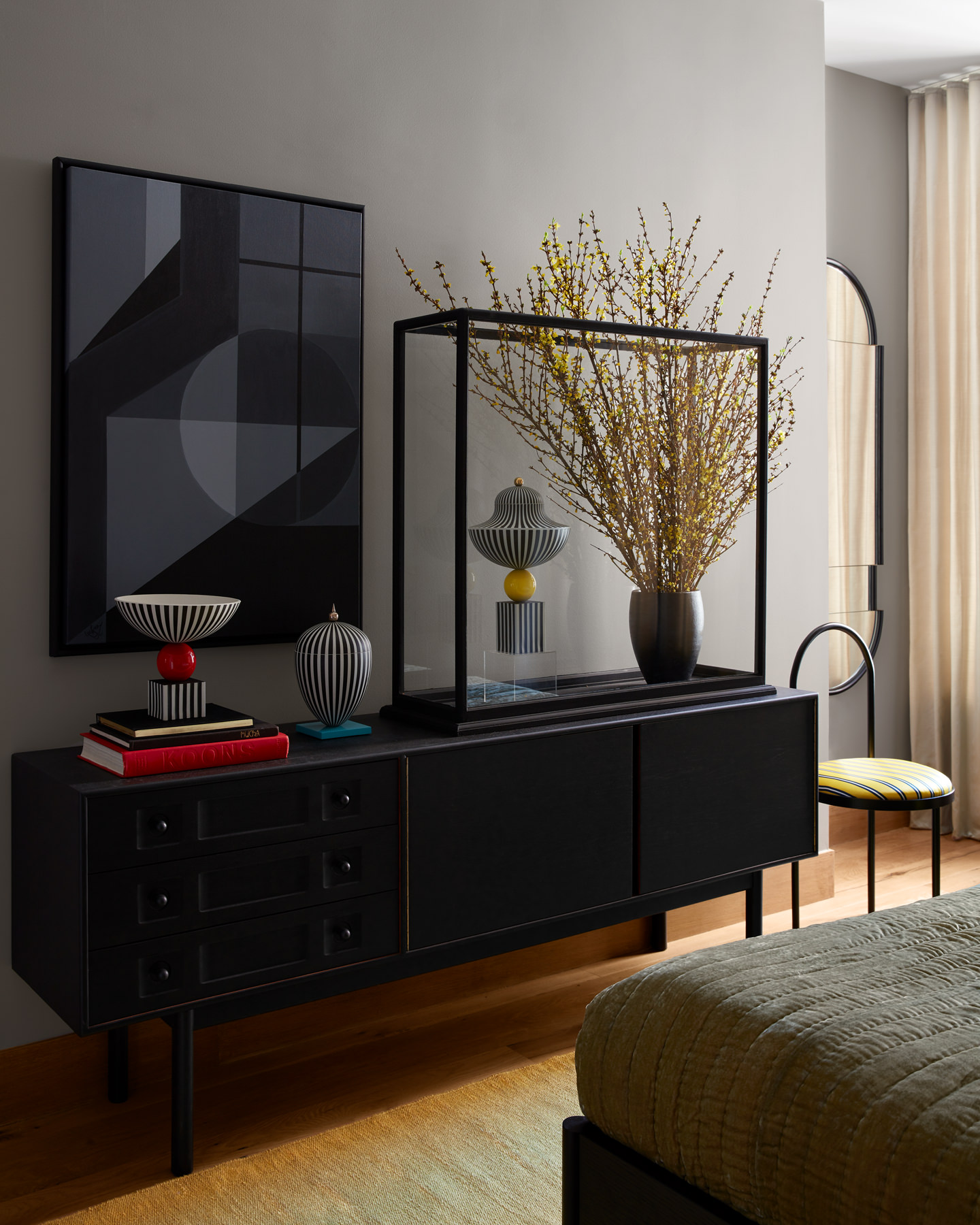 Lee stained the vintage McIntosh sideboard in stained black. The large display case is Victorian and was originally used for the Milan Design Week show Department store in 2015. The artwork was painted by Lee Broom. Lee Broom Split Mirror hangs in the background with an Altar Chair in front, also a Lee Broom design that’s been archived. 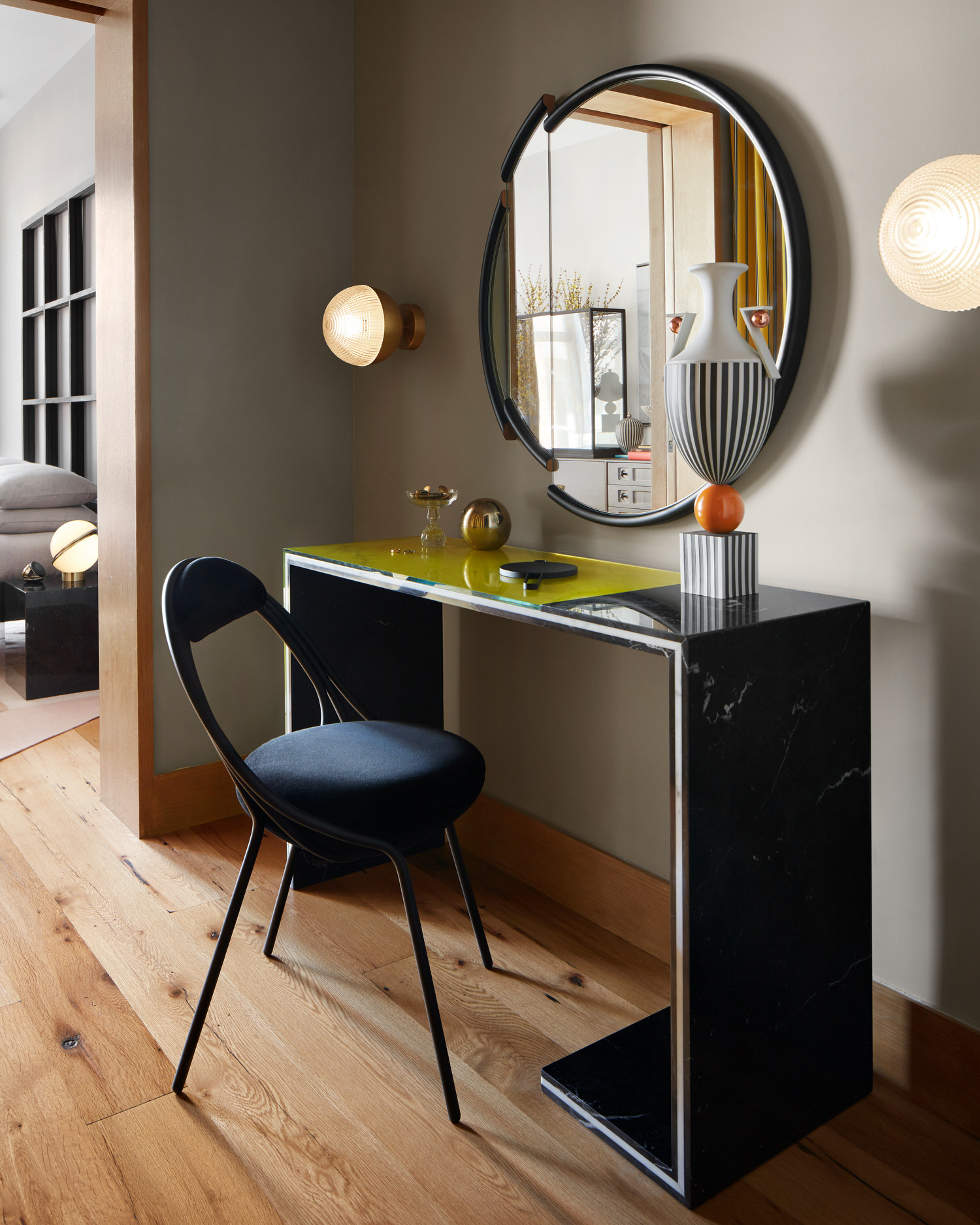 The dressing room off the guest bedroom includes Lens Flair wall lights, Musico chair in matte black, Split Mirror Round, and Acid Marble table – all by Lee Broom. On the table is a Wedgwood by Lee Broom vase on orange sphere and Half cut glass.

For his refuge in the Big Apple, Broom envisioned all the rooms as a series of curated vignettes, each with its own personality. Specifically for this penthouse, he also designed a new collection of furniture and accessories which will launch this year. Honouring Broom’s love of symmetry, one of the main pieces is the White Street modular sofa, which adorns the living room and is effortlessly connected by sculpted armrests, corner or side tables in black or white ash.

The Tribeca coffee tables in black silk marble and travertine with smooth round tabletop cantilevers over a monolithic square base also help shape the elegant and peaceful atmosphere. Broom reimagined the Fulcrum candlestick in a tactile, rough-hewn solid travertine, which complements the bespoke fireplace and plinths. In the dining room, the Aurora chandelier hangs over the Musico table and recently launched chairs, with blue walls and grey curtains as a backdrop.

Through this project, Broom created a space that perfectly fits his needs and corresponds to his taste, while giving free reign to his imagination to design new pieces of furniture and lighting that will soon elevate other interiors around the world.