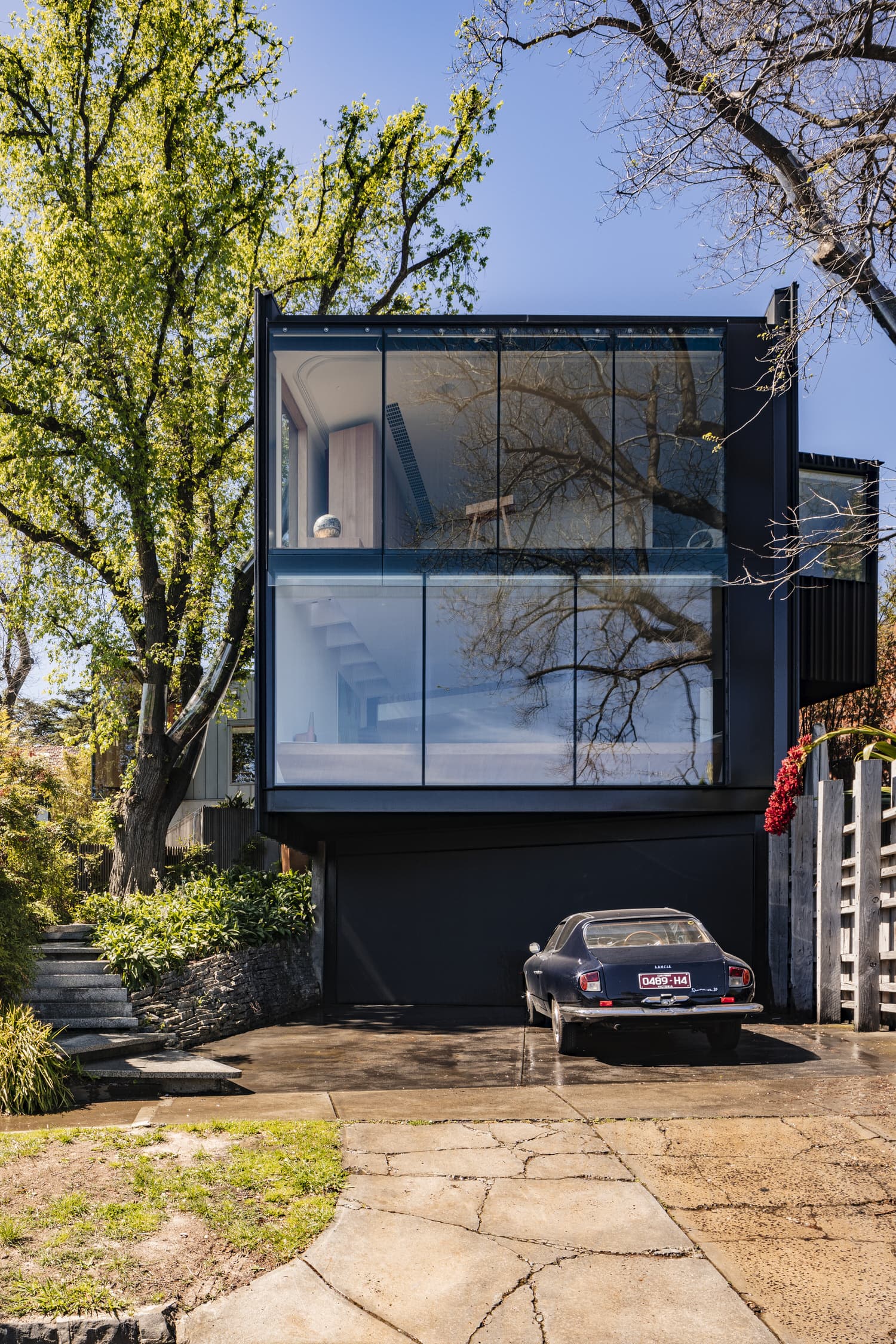 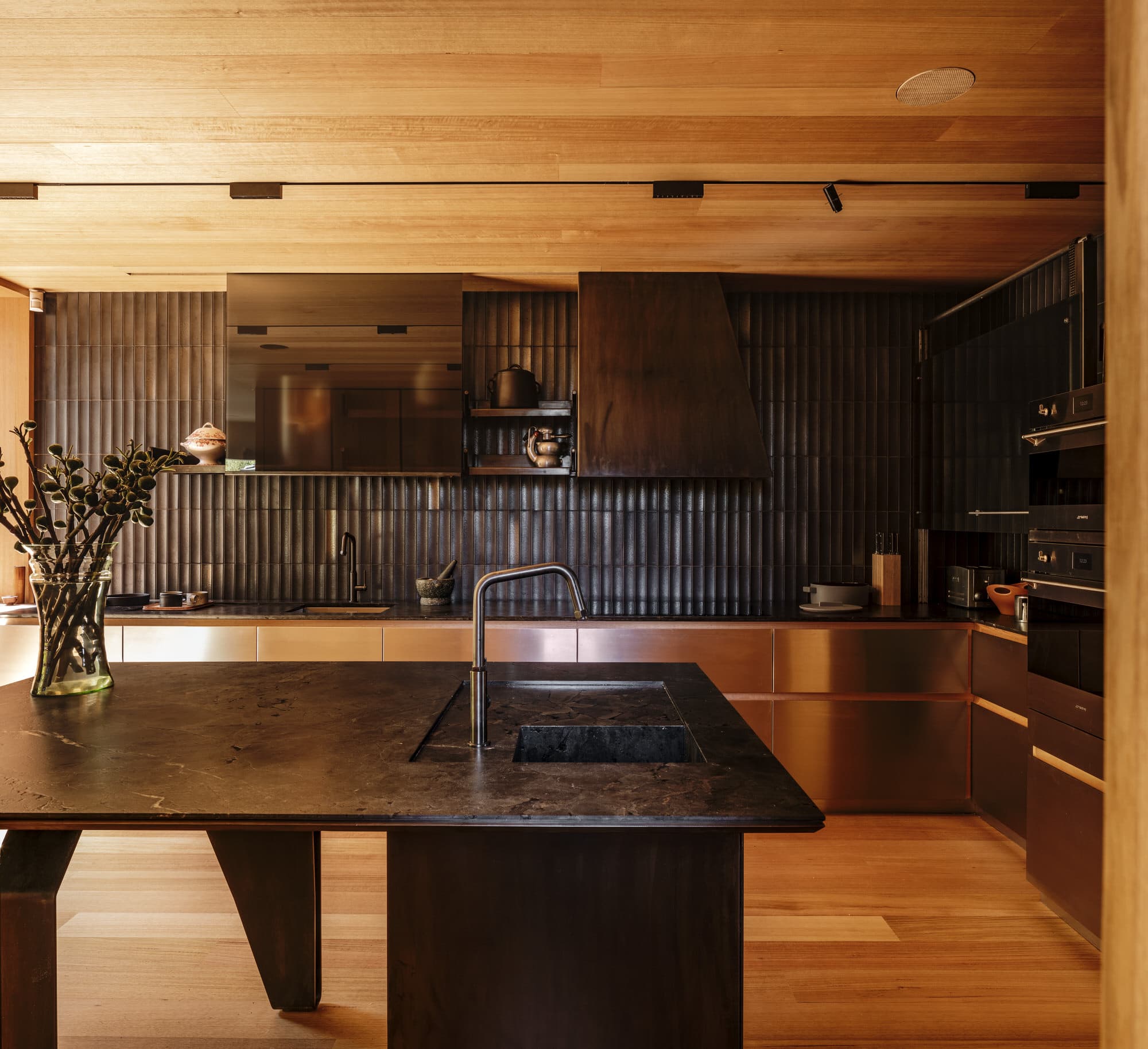 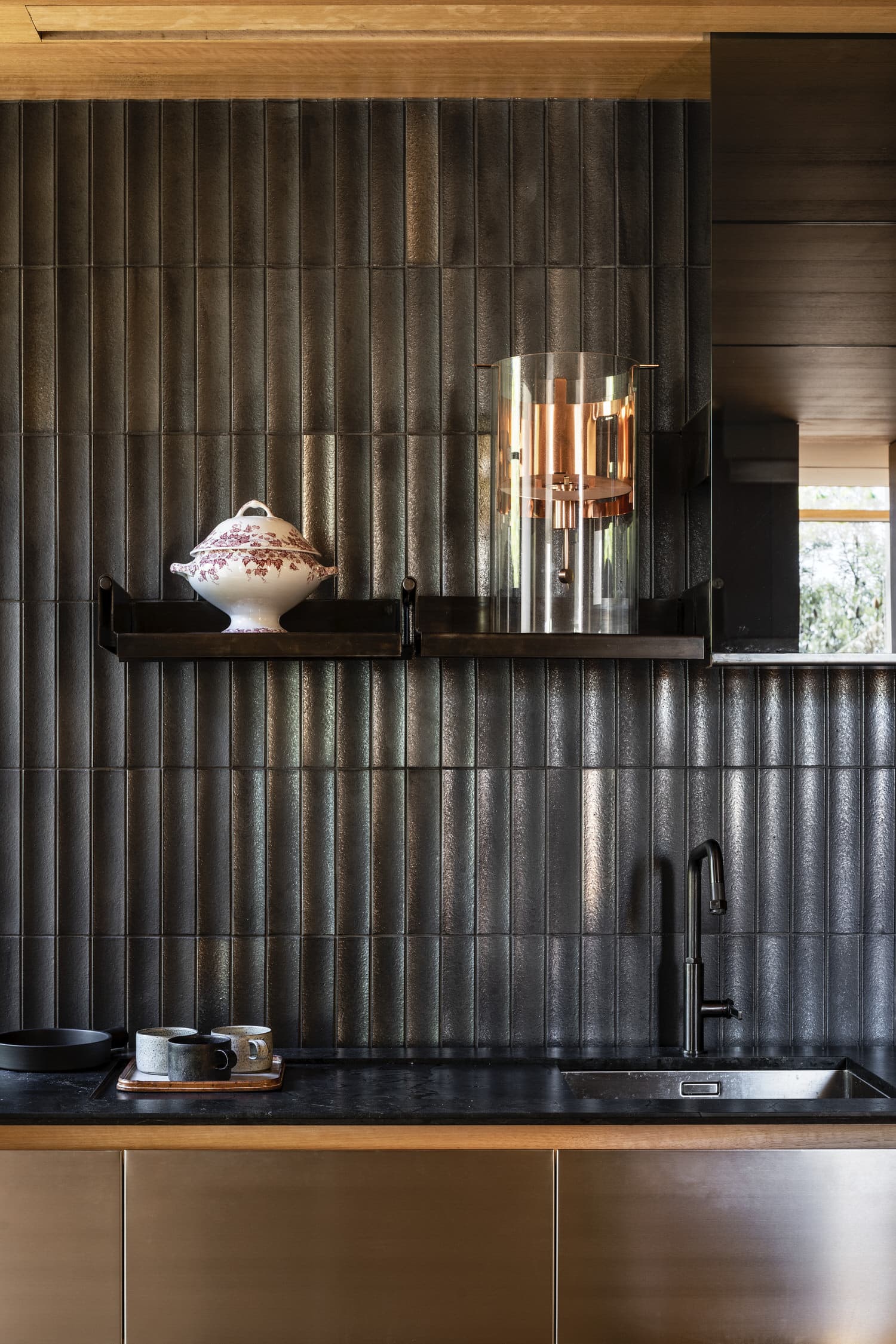 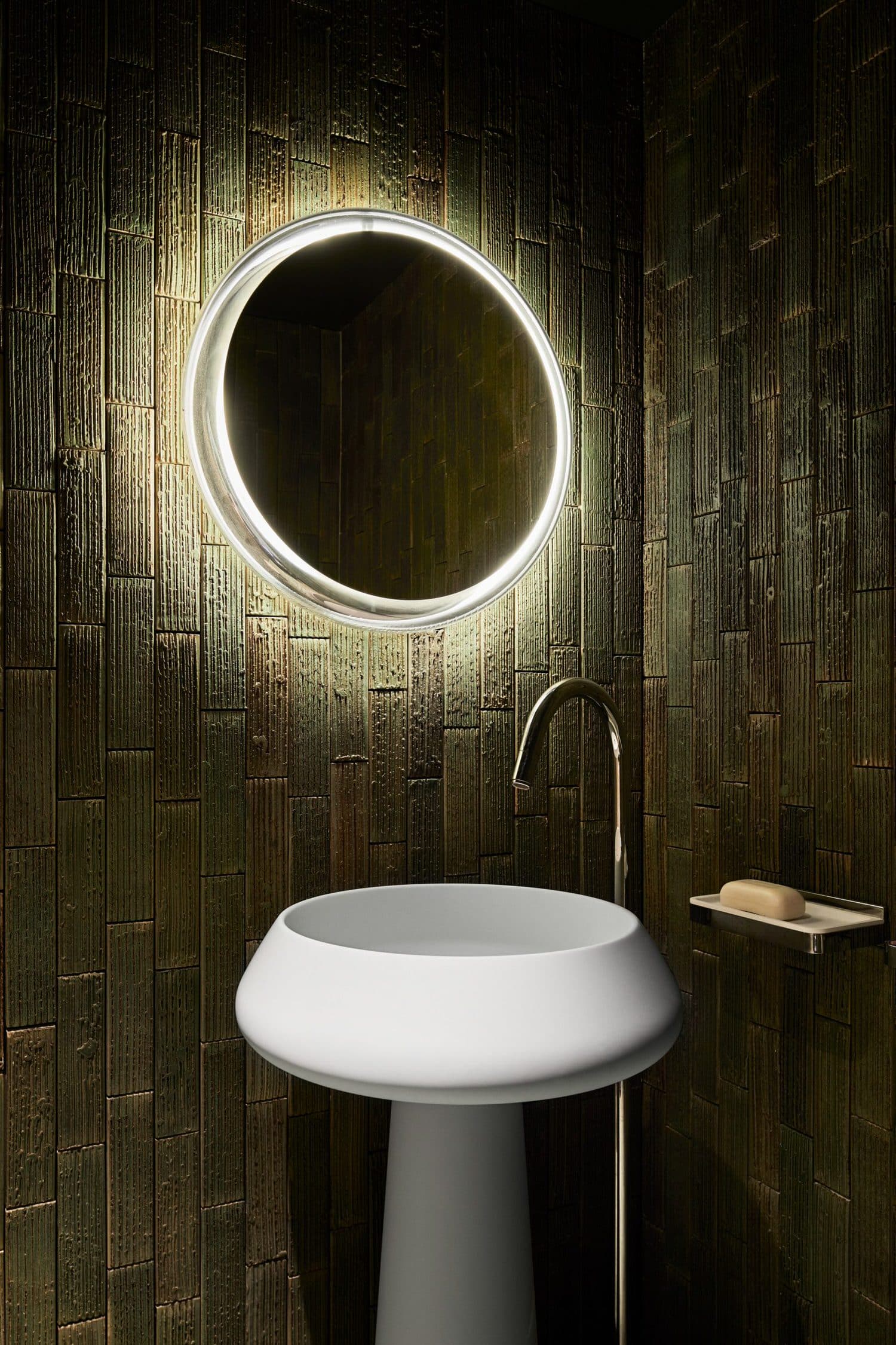 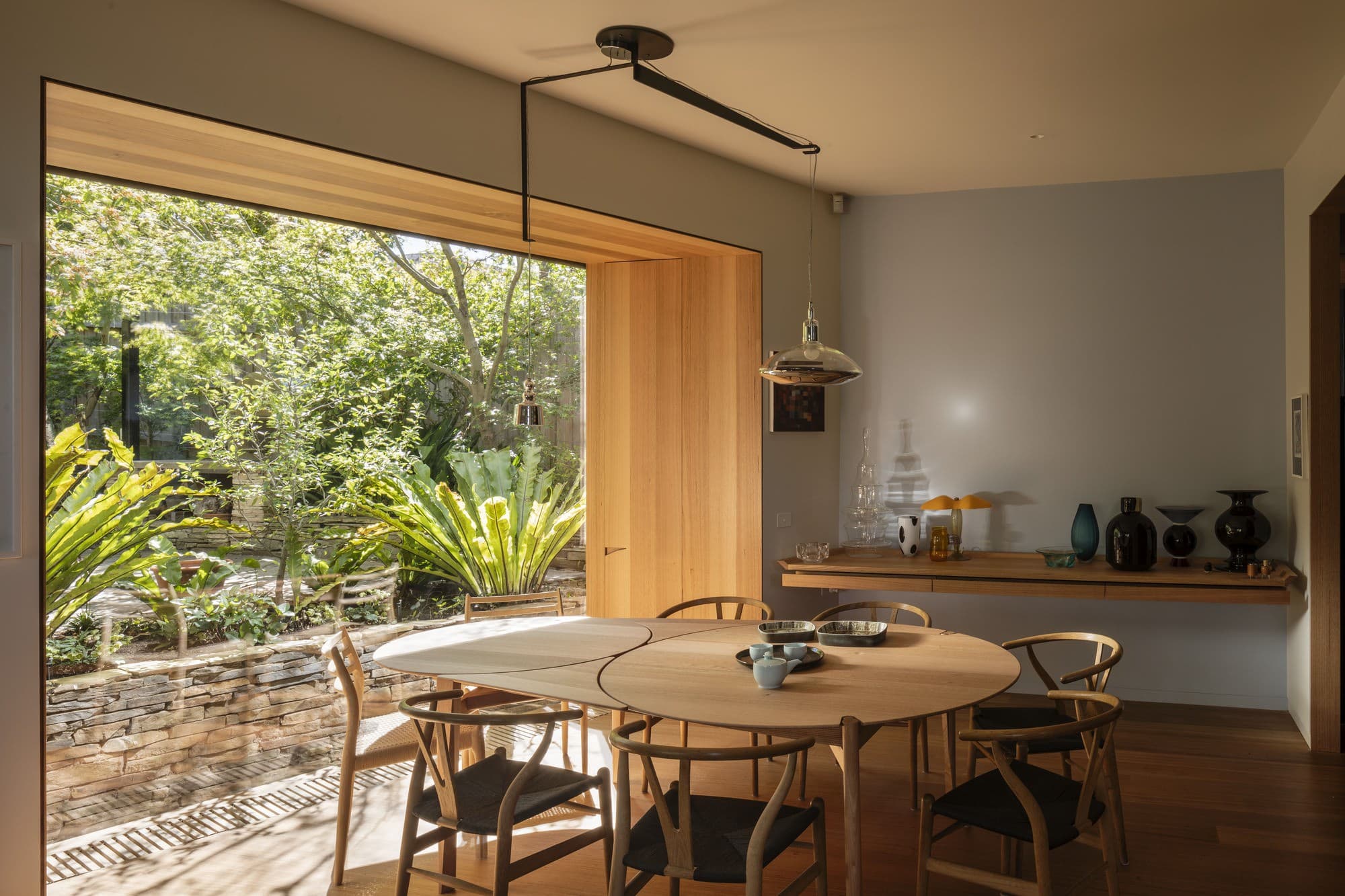 Framed by overarching trees and three luscious elms is John and Susan Wardle’s renovated Kew Residence. Originally designed by Horace Tribe in 1951, the house is now beyond recognition after undergoing two modifications sparked by a slight oversight of termite infestation. With three children “(wearing) out the last iteration” and moving out of the three-storey residence, John and Susan took in a newfound opportunity to reinvigorate the home to suit their current and ongoing needs. Now completed its third renovation, Kew Residence proudly stands as an eclectic memoir of John Wardle’s adventures from childhood to now.

Located in Melbourne’s quiet suburb of Kew, the house is easily missed by its orientation on the site. Only a large window, stretching over two floors rests on top of the basement garage, is visible at street level. It is only when taking the subtle stone steps besides the garage that a sculptural façade of stone-like neutrals is revealed, crafted from the rough-textured walls paired with corrugated iron. This arrangement conceals a bungalow towards the North of the property, offering a peaceful escape from the main house. 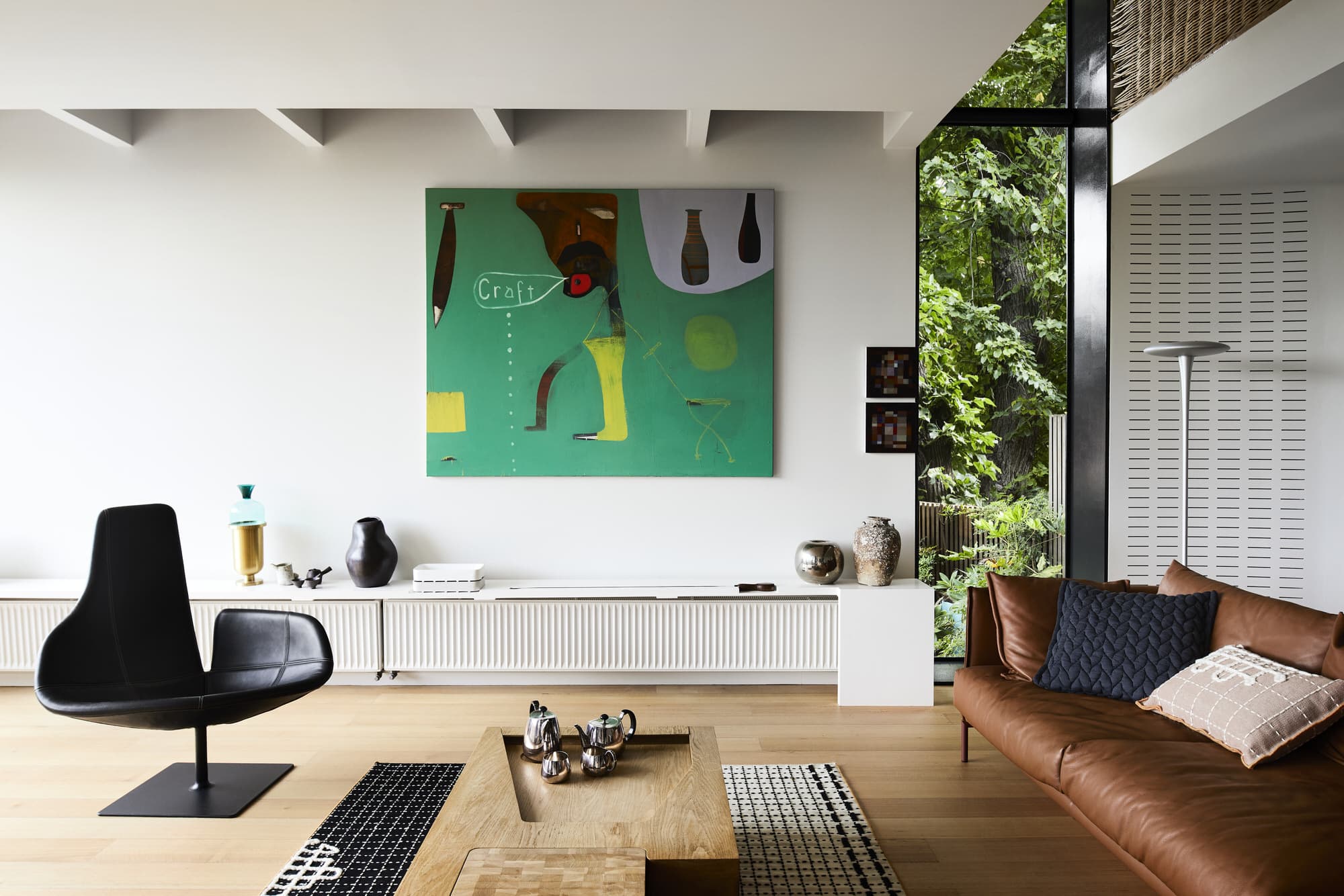 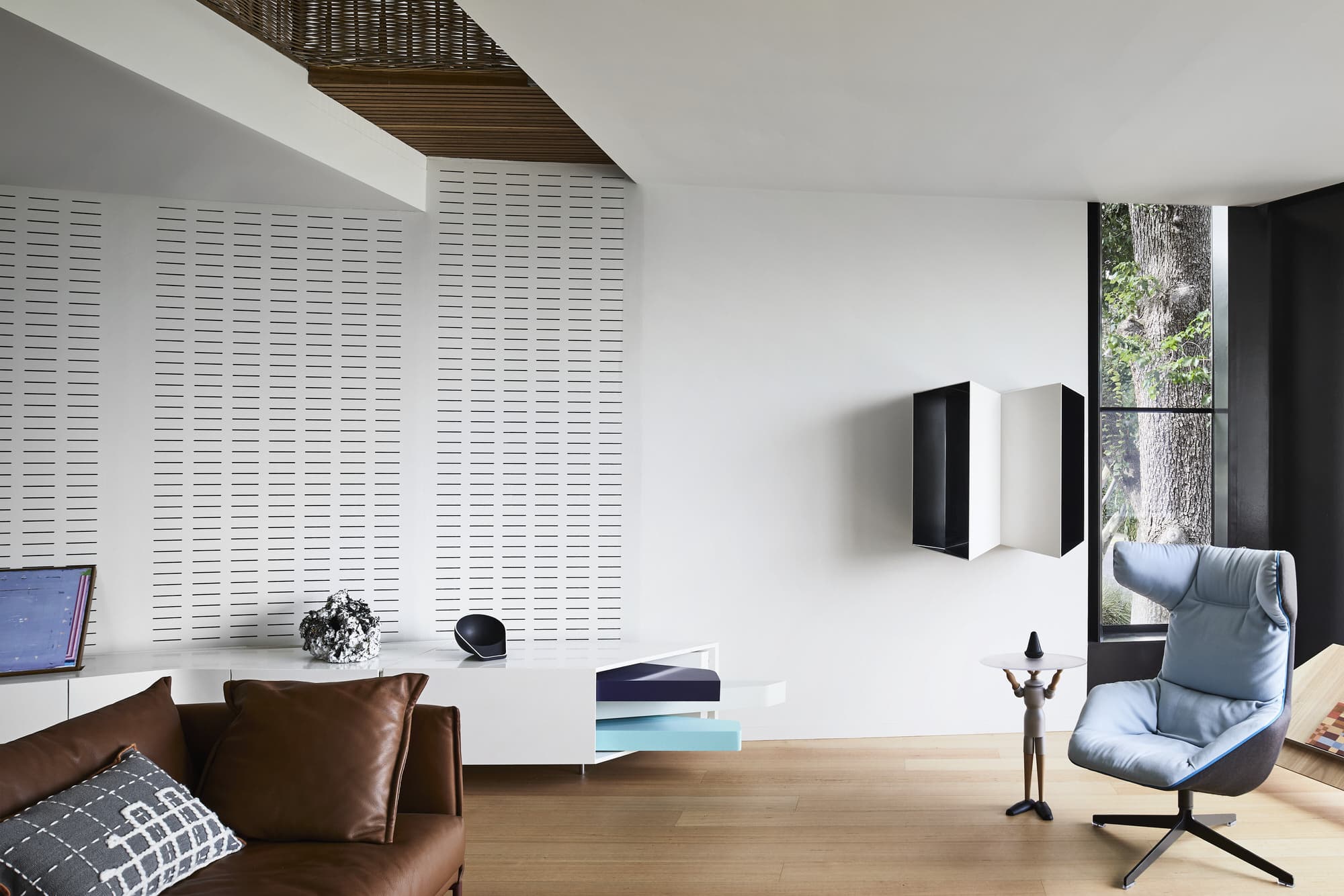 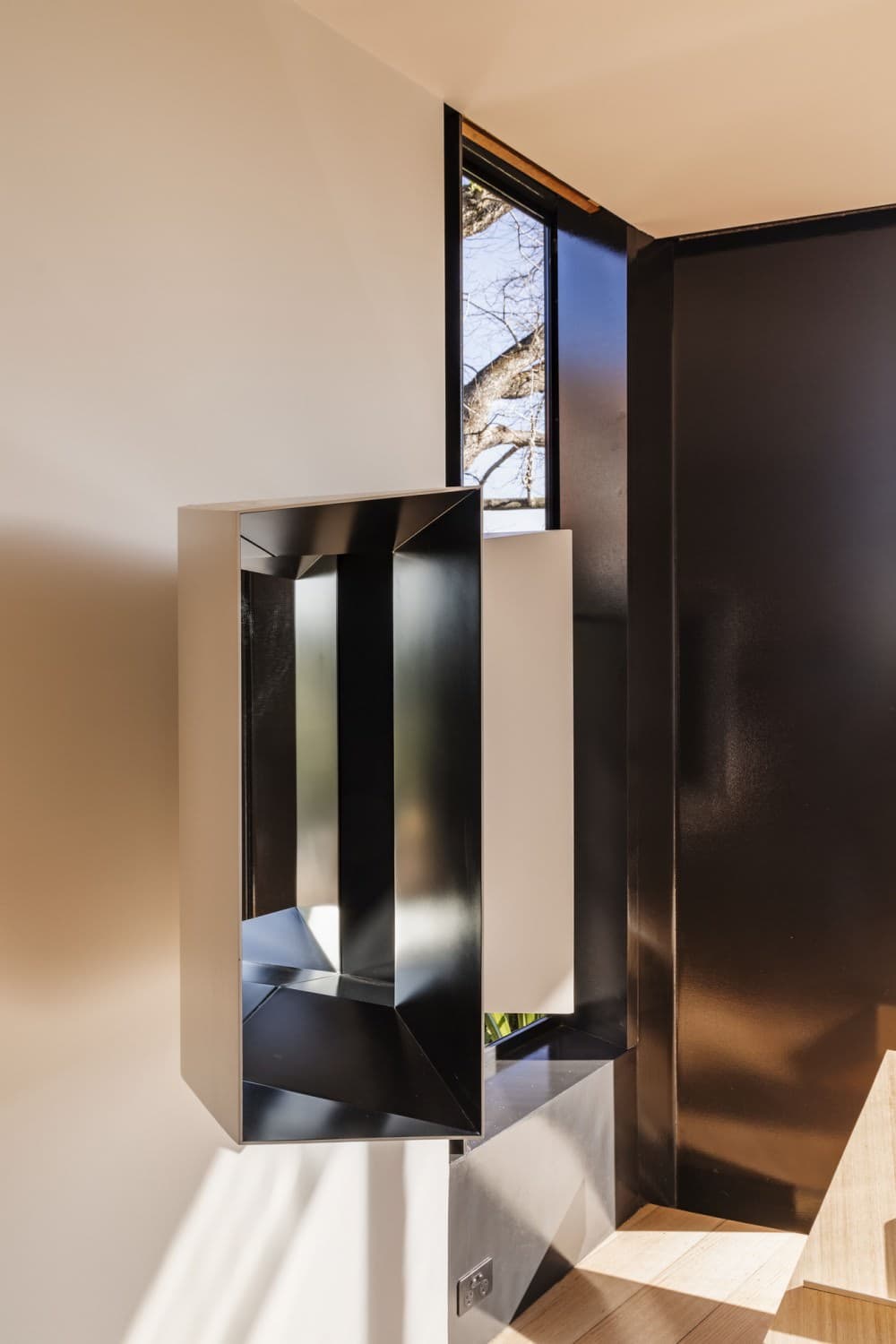 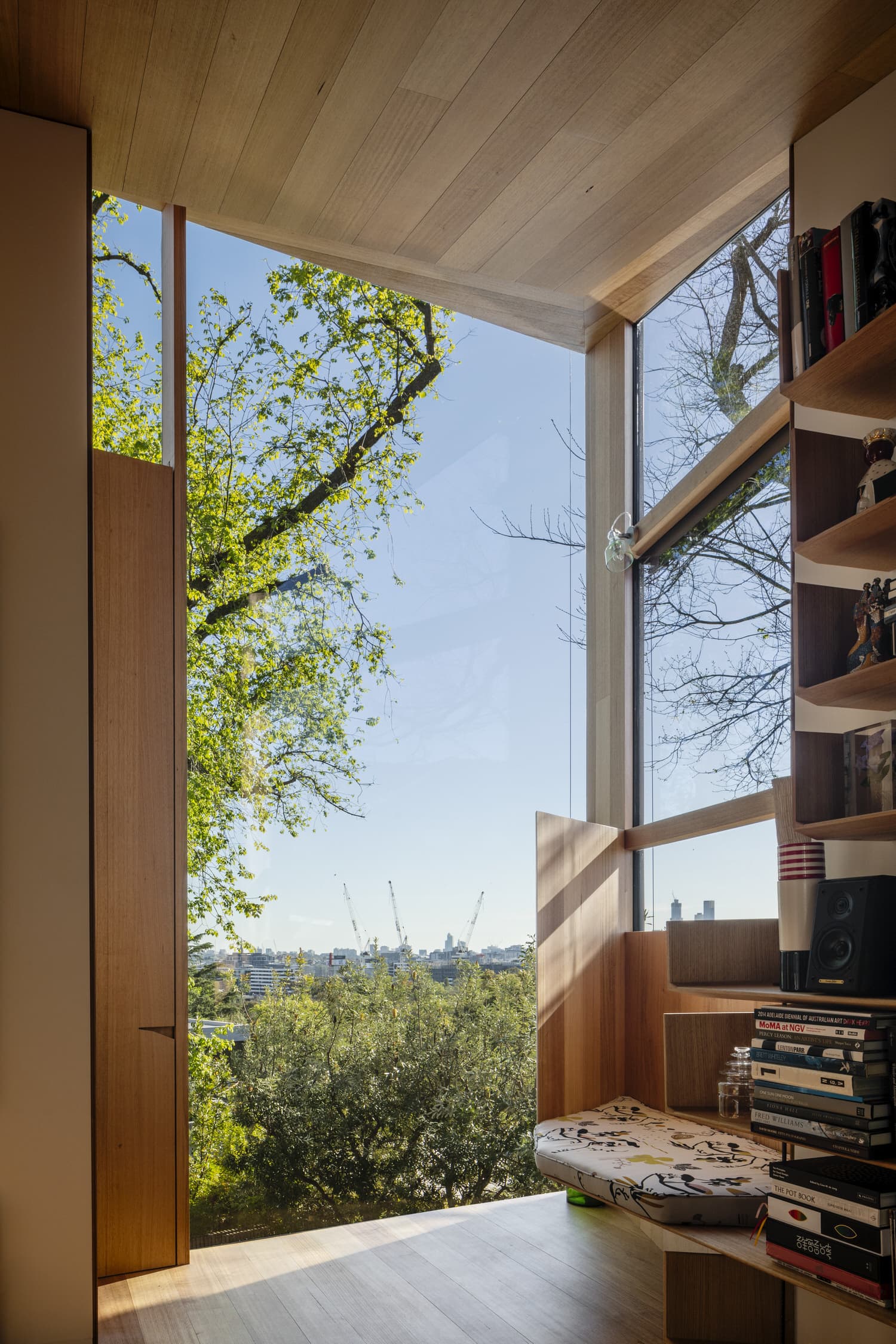 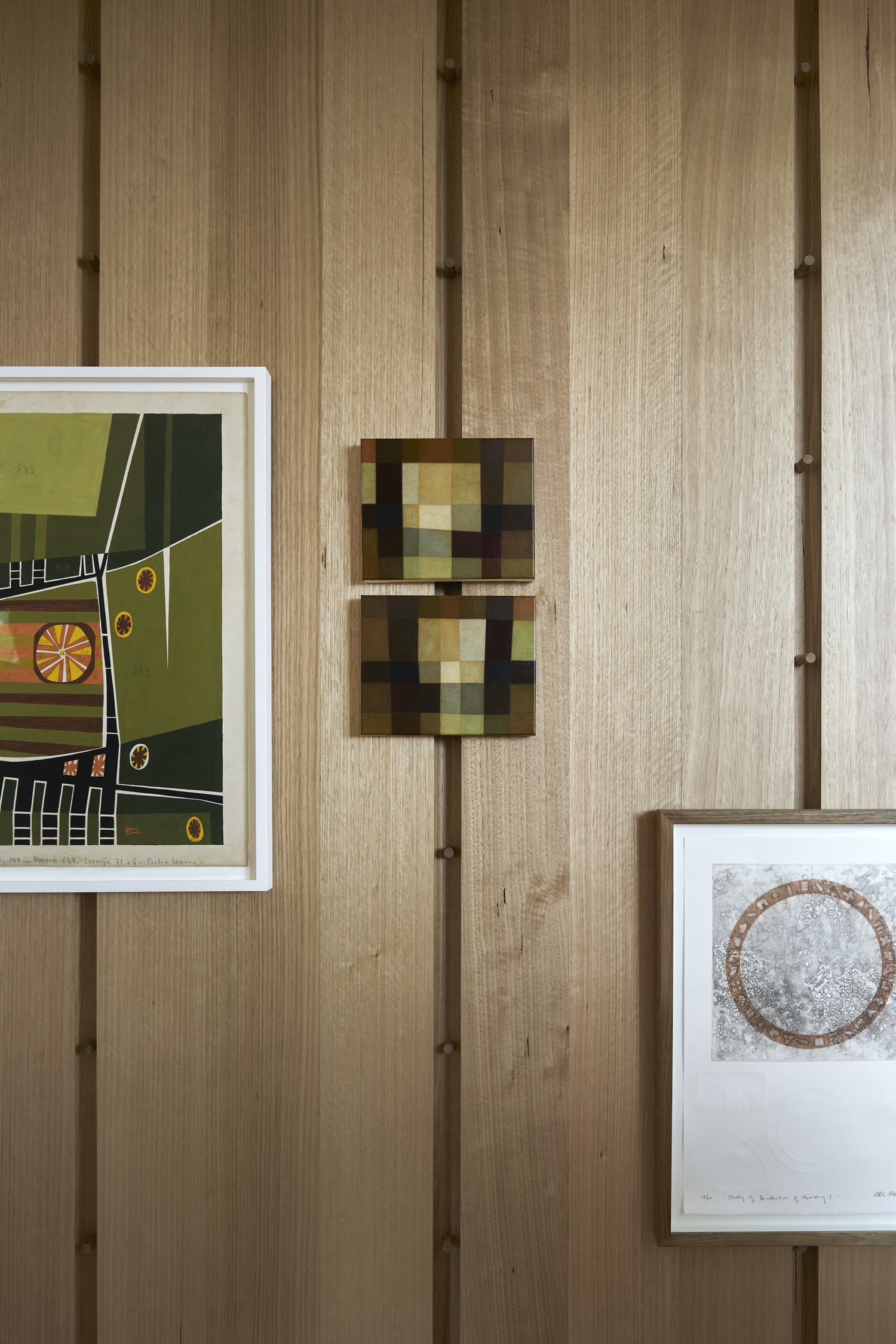 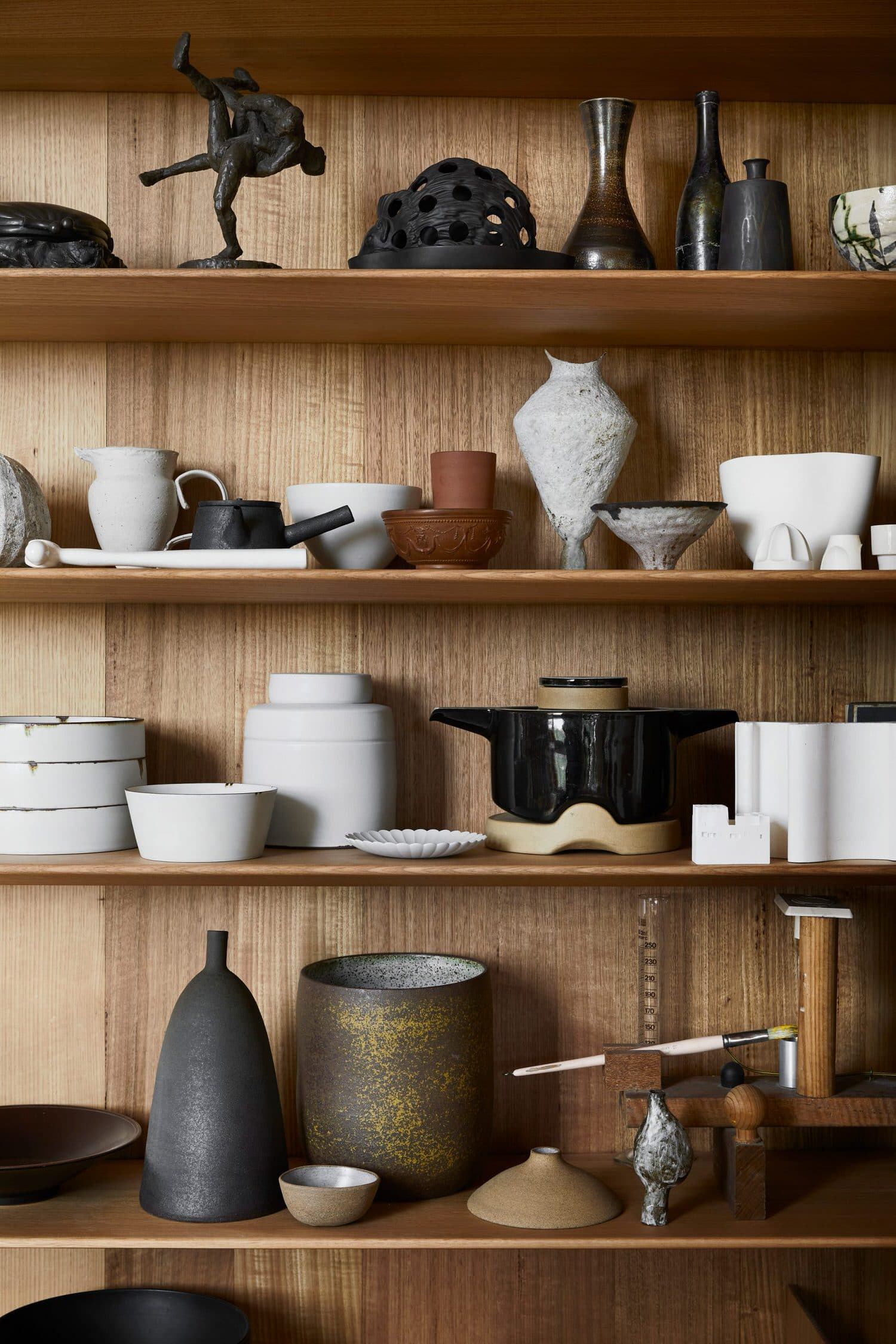 The main building consists of four bedrooms, two bathrooms, open living/ dining and a separate entertainment area. The renovation, totalling 382 square metres, reaches every corner of the house, bringing back its original structural integrity and making it more energy-efficient via reglazing of the windows and resealing of doors. Burnt caramel-coloured Victorian Ash timber extends across the house, with prominent areas such as dining and study capturing the dappled light filtered from the luscious leaves. The material continually serves as a timely canvas for Wardle to display an impressive collection of beautifully crafted joinery – even the walls in the hallway are notched for flexible photo arrangement. Such quality of light and sightlines reflects Wardle’s appreciation for Louis Kahn’s Zen-like window seat in the Fisher House.

Growing up with a fascination for collecting artefacts, celebrated Australian architect desired to display his collection with an “archaeological charm and aesthetic”. His study – formerly a children’s playroom and elevated terrace – is now embellished with a wall of ceramics that transforms into a cupboard storing additional objects. Though the selected pieces are small enough to be asleep inside, other ones spill around the house, from the bespoke jigsaw-like dining table to rotating pottery beside the stairs. You can say the house is really inception of artworks – especially with Natasha Johns-Messenger’s pop out periscope window in the living room offering an alternate perspective of the city skyline. 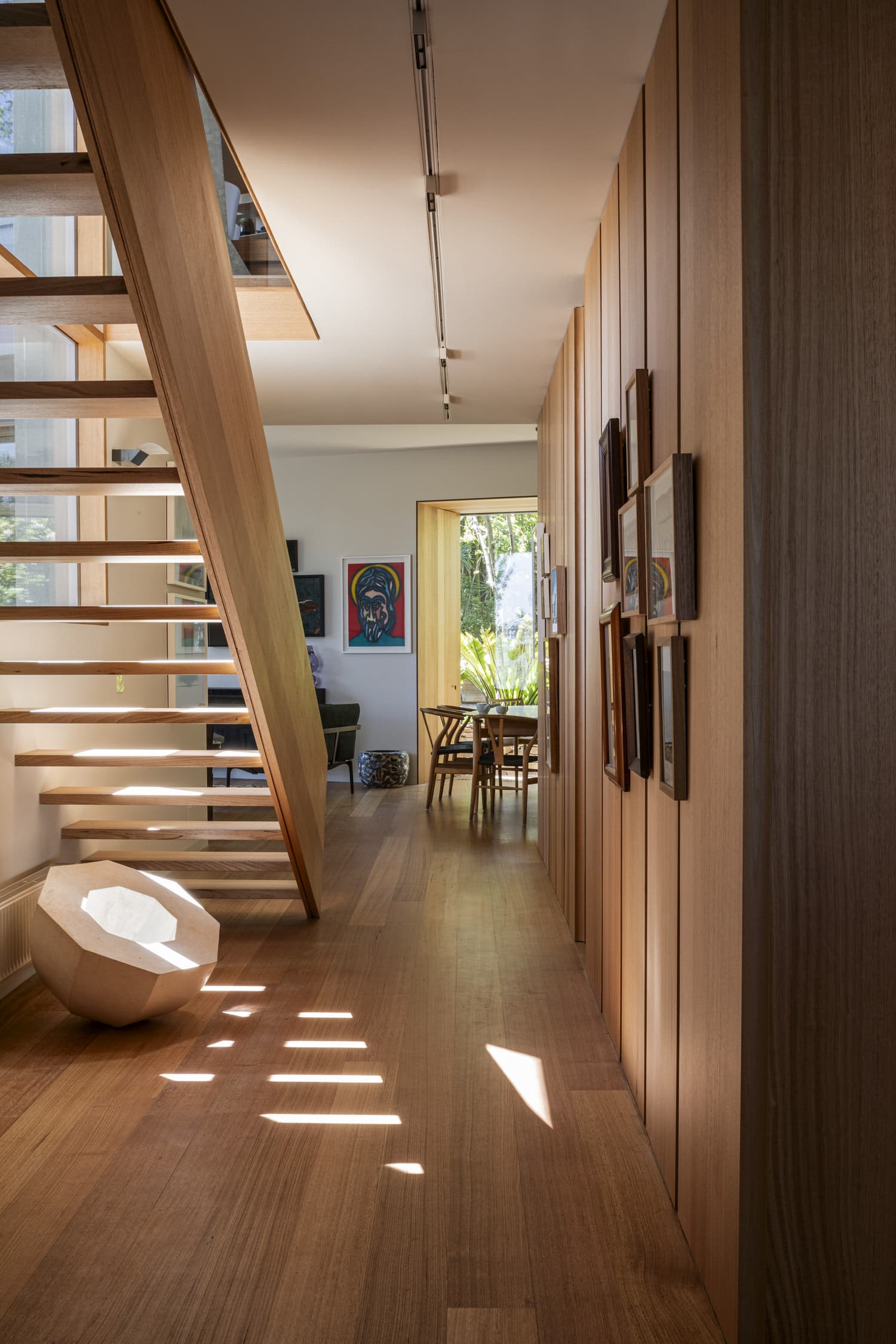 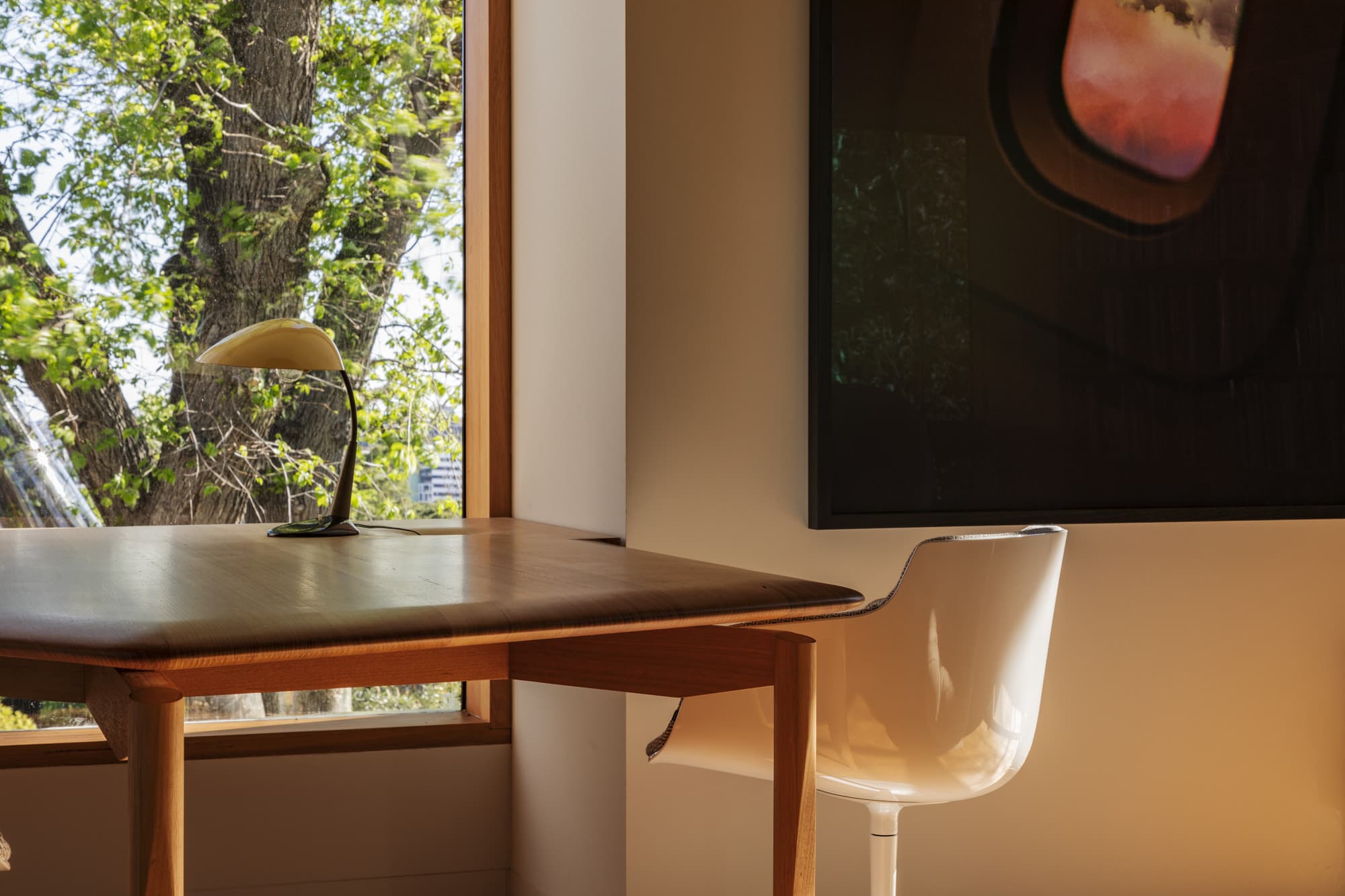 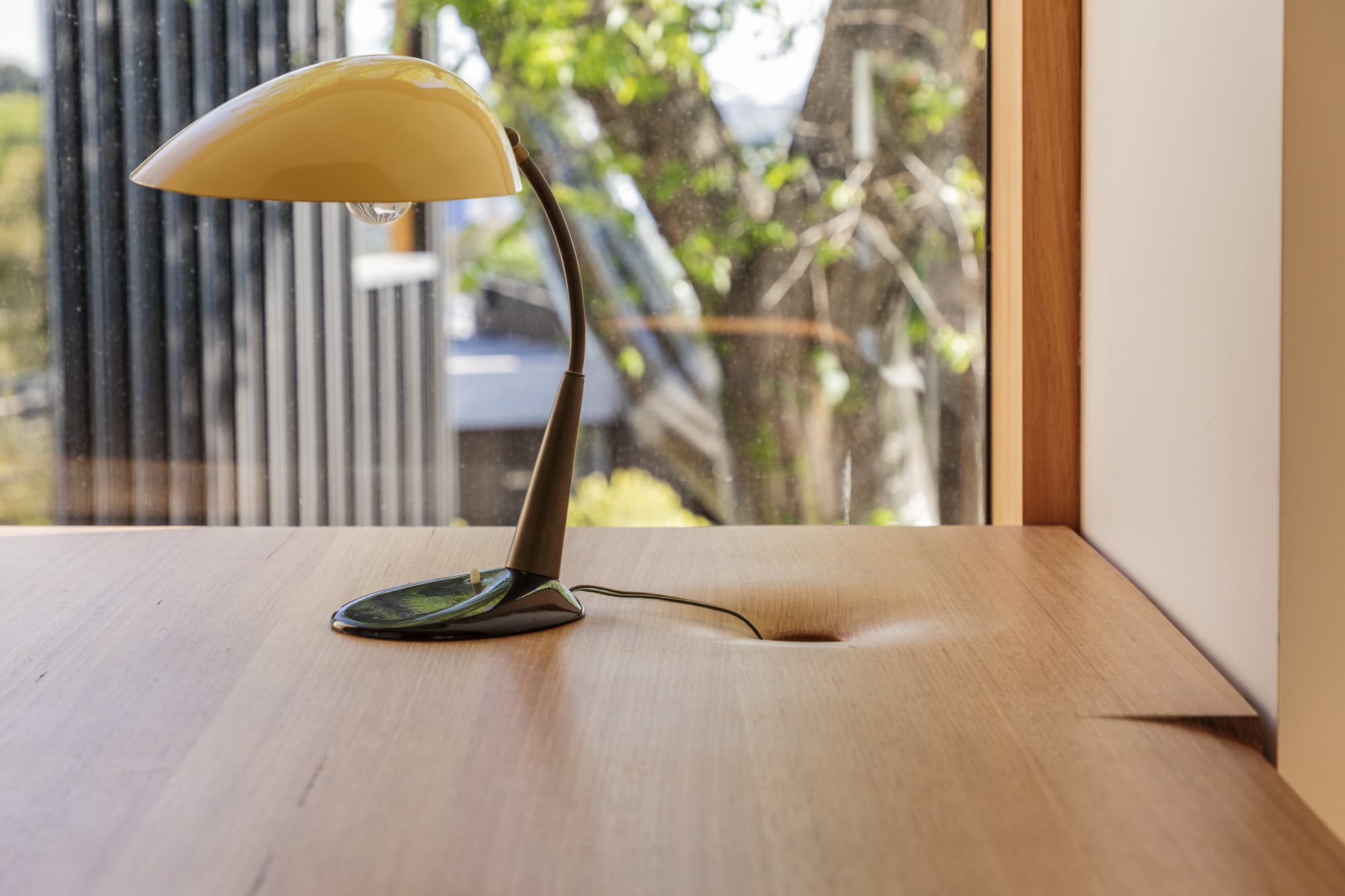 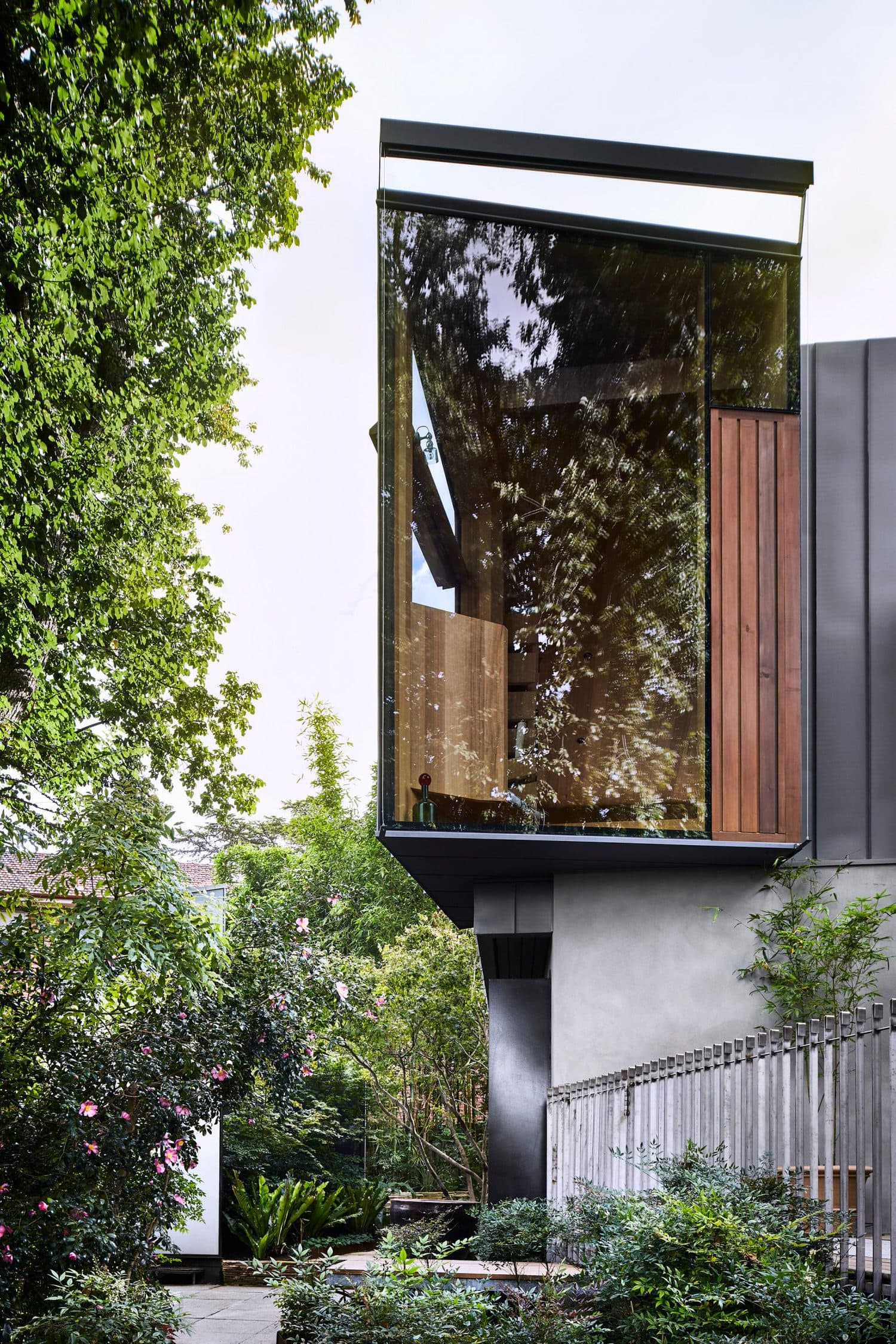 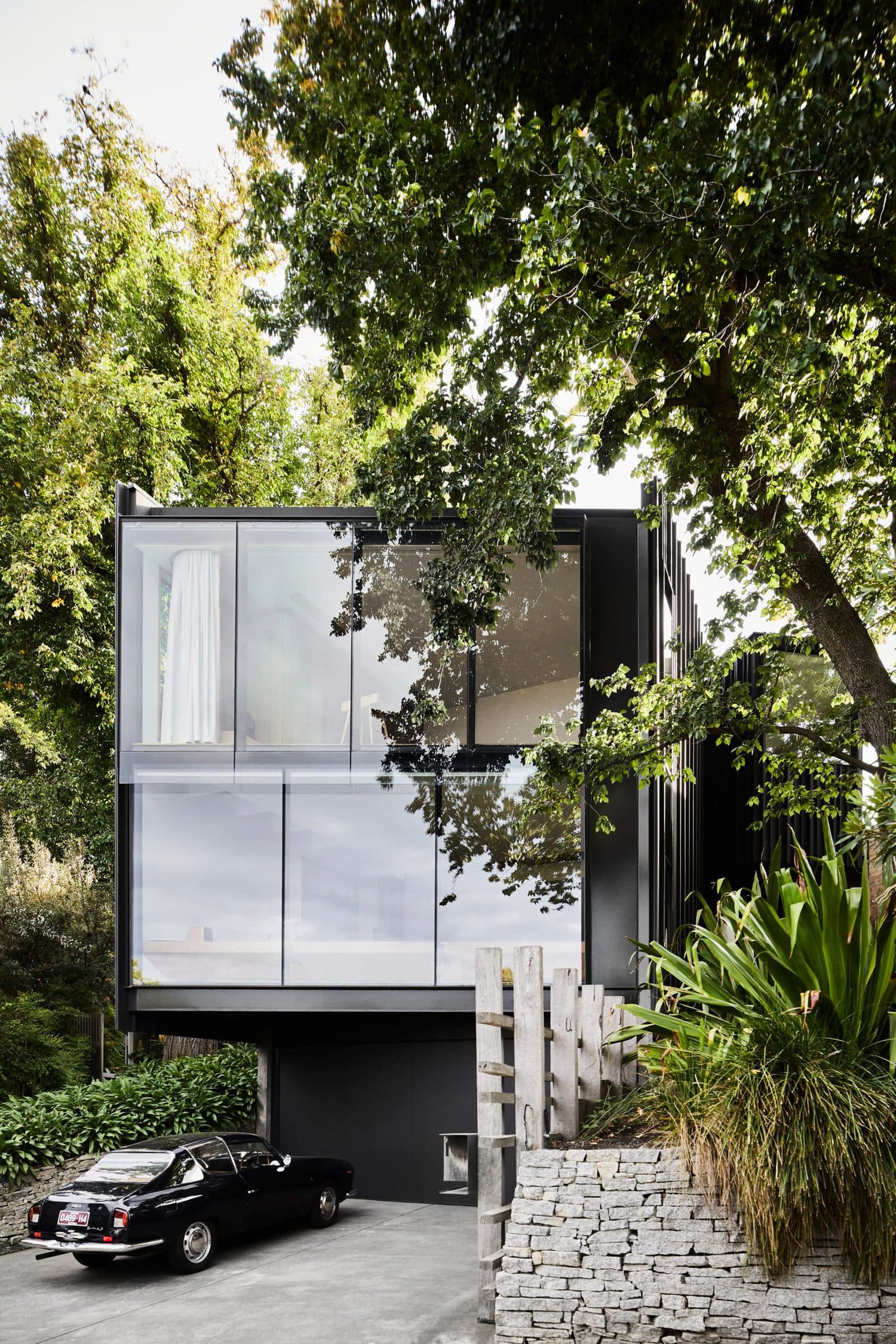 It’s safe to say Wardle’s deep appreciation for craftsmanship unifies everything so effortlessly. Intricate details in the carpentry and joinery are unmissable in the family space – his 2001 thesis bench, which can change into a music stand, awaits a musician to entertain the space; the open plan kitchen is lined with concaved charcoal-like INAX tiles parallel to the timber, fitted with robust built-in cabinetry complimented by a bespoke Quartzite-topped island counter. Similarly, a newly added powder room beside the kitchen is paved with tiles “of a rare (handmade) sample” sourced directly from a factory in Taijimi, Japan – a city renowned for its ceramics.

As Wardle explains that “the home doesn’t represent just one architectural style and instead leans on various influences”, Kew Residence’s character whispers a growing treehouse to me. Filled with secret yet not-so-secret cabinetry, and a treasure trove-like display of childhood archaeological trinkets – somewhere within a sound design resides a youthful and nostalgic charm, bursting with pure joy.

END_OF_DOCUMENT_TOKEN_TO_BE_REPLACED

How To Decorate With Plants: Hello Holly Meets Igor Josifovic

Hello lovely friends! I’m not sure if you’ve listened or not, but I had a very special guest expert on HELLO HOLLY who...
Read more
House Design

Hi friends, it’s Anke and I’m back again to welcome Spring together with you here on decor8! I thought for this column going...
Read more