How to write recruiting emails that aren't terrible

As a writer living through a tech-industry-wide content boom, I get a truly shocking number of cold recruitment emails and LinkedIn messages.

I'll admit it's a bit of an ego boost: not only am I popular, I'm wanted. People think I'm good at what I do, and they want to pay me money (and give me snacks) to do it.

But a lot of the cold recruiting emails I get aren't very persuasive. In fact, some of them are downright annoying and make me actively dislike the person or company who sent them—the opposite of what they're supposed to do.

If these were Normal Times™, I'd sit at a bar with friends and dramatically complain about how awful these messages are. But since the pandemic has ruined both of my favorite pastimes (Margarita Mondays and dramatically complaining about mundane things), I'm going to give a few pointers on how to write recruitment emails that will woo the absolute best and brightest instead.

Before we dive in, a note: I'm not a recruiter. I want to share my experiences as someone on the other side of the cold email, so to speak. While I can't speak authoritatively on recruitment best practices (though I did consult with a Zapier recruiter while writing this), I can hopefully shed some light on how your cold emails might be landing with us ordinary folk—and how to make them land better.

Tell me what the job is (and how much it pays)

About 60% of the cold outreach messages I get go something like this:

"Hi Hannah, are you open to new opportunities? If so, I want to talk to you about an amazing role at a high-growth company that pays a competitive salary. Let me know a few times that work best for you!"

Great pitch, right? I mean, just look at those adjectives!

By sending a vague first email, you're undercutting your ability to turn initial interest into an actual screening call or interview. For most people, a vague cold email isn't going to make them want to learn more about a potential job, even if there's a tiny seed of initial interest. (To be honest, I don't even usually reply to those types of messages; I just ignore them, and I'm sure I'm not alone.) It might even mean they're less likely to be receptive to other opportunities you might have in the future. The experts at enlist, an applicant tracking software company, suggest taking a moment to think empathetically about the person you're emailing:

Put yourself in the candidate's shoes for a moment. They (likely) already have a job. Where are they in their career right now? What could be next for them? Why should they switch, and especially, switch to what you are offering?

Sending a generic email about a stealth startup doing exciting work in an important market with absolutely no specifics is unlikely to garner people's interest because a lot of them get a lot of those emails, every single day. Being clear and specific about what you are offering can help a lot.

Additionally, it can raise some real red flags for candidates if your email makes the job sound like, well, a scam. Maybe I'm just jaded from the multi-level marketing craze, but there's something about job description vagueness coupled with glowing praise for an unnamed company that just makes my spidey-sense tingle. If you're not telling me what the job is upfront—or if you're describing it in over-the-top jargon language—it makes me automatically suspicious that it's not as great as you claim. As Workable writer Christina Pavlou puts it:

Check your language again to spot jargon phrases that could be off-putting. A 'rock star developer' or a 'ninja engineer' are just buzzwords that don't really explain what you're looking for or why you decided to reach out to a specific candidate.

But even if you don't sound outright scammy, vagueness can signal that you don't value a candidate's time—and that's just as big and as red of a flag.

After a few years in the working world, most folks come to know what they want in a work environment. They know what it means to them to feel valued and appreciated. For a lot of people, showing respect for their time and boundaries is incredibly important. So when you send a recruiting email that's light on the details, it can signal that you don't value their time, because you're not giving them any relevant information.

Instead, try to be as descriptive and transparent as possible. In some situations, like when you're a recruiter from a third-party firm, you may not be able to disclose everything. But do your best to describe the role—and why the person you're emailing might want it.

When I joined Zapier in 2019, I was recruited from another company—and I had a great recruitment experience. My recruiter, Emily, made a real impression by talking to me about my previous work. She demonstrated that she'd done her homework; not only did she know where I previously worked, but she'd read some of my recent writing. She made a point of talking about how my previous experience made me a good fit for a similar role at Zapier. 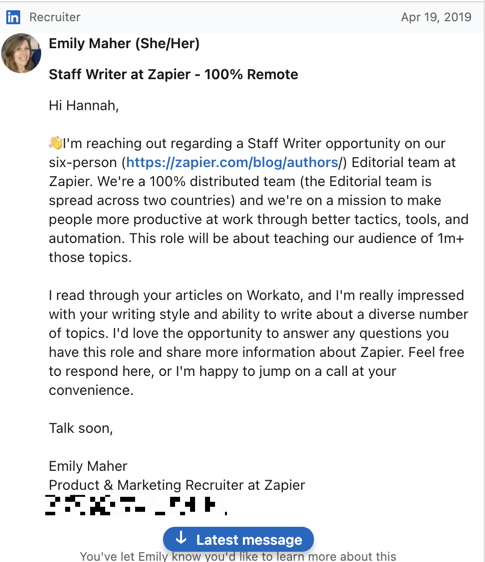 Now, you don't have to get this intimate with the very first email. But being personal, rather than generic, from the beginning can go a long way. Personalization can and should start before you even send an email. Many times, you can do a little research—on someone's LinkedIn profile, for example—and use that to personalize an email.

But what if you can't find a lot of additional, relevant information? Cecilia Garza, our in-house talent sourcer here at Zapier, says that you can still be personal even with a general outreach email.

If you're unsure whether someone is right for your specific role, but they look like a great person to know, send a general outreach message! Recruiting is about building relationships—so rather than making assumptions about their interests or fit for a role, send them a general message to see if they're willing to connect. Maybe mention a few of the roles you have open that they might be good for and see whether anything jumps out to them.

It's also important to remember that most people are pretty good at picking up on whether an email is genuinely personal or a mass email blast type of situation. We've cultivated a certain disdain for emails that are obviously copy-pasted, and we're far less likely to respond to a message that feels like a SkyMall T-shirt: one size fits all.

"But isn't recruiting just a numbers game?" you ask. "Don't I need to email as many potential candidates as possible to find the right one?"

Sort of, according to Cecilia.

Yes, it's a numbers game. But if you cast the net too wide, you risk having a lot of calls with little true success—which wastes both your time and that of the candidates. If you're mindful of how and whom you send messages to, it'll help you balance playing the numbers game while also being genuine.

In my experience, it's delightful when a recruiter has actually read my work, knows what my strengths are, and is pitching me on a job that I'd be well-suited for. When they try to sell me on a gig that doesn't quite match my skill set or experience, it feels more like they'd take any warm body.

…but don't be creepy or pushy

However, you also don't want to swing too far in the opposite direction, which can quickly become creepy.

For example, I once got a cold email from a recruiter who claimed to be "my biggest fan" looking to "help me grow my career." Reader, I had no idea who this person was—nor did I want help from them. Their too-familiar email was really off-putting, like someone at the next table over helping themselves to a bite of your food.

Instead of assuming that the person you're emailing remembers you (or acting as if you know them when you've never spoken before), Pavlou suggests being upfront in your initial email:

First of all, it's a good idea to introduce yourself and your company and explain how you found out about your recipient. If you're writing to a referral, mention your mutual connection. And, if you met in person at an event, remind them. If they applied to another role at your company in the past, mention how the new position seems like a better fit. Or, if you've never met them before, but their tweets caught your eye, tell them that's why you're contacting them. The more transparent you are about how you found them, the better.

The same goes for any follow-up emails you might send: be respectful, and try not to go overboard. It's a fine line between staying on top of things and being pushy.

When I didn't respond to their initial email, the (non-Zapier) recruiter I mentioned earlier emailed me three more times in the next week. Finally, I caved and sent a polite "Thanks but no thanks" email. Instead of chalking it up to a loss, they then added me on LinkedIn "just in case." I rejected their request because they just couldn't seem to take a hint.

Be genuine, not a suck-up

Finally, my last piece of advice is to not go too hard on the compliments. While it's good to demonstrate to candidates that you think they're qualified, and everyone likes to hear nice things about themselves, it's easy to cross the line into seeming like a disingenuous flatterer.

Remember that awful recruiting email I got, where the recruiter claimed to be my biggest fan? They also claimed that the CMO had personally shortlisted me for the role.

While it's nice to think that a CMO chose me out of a lineup, personally, the reality is that that's probably not true. And it's unlikely that the recruiter is actually my biggest fan; that honor goes to my colleague Justin or any dog to whom I've snuck a bit of food from my plate at a holiday dinner.

People are smart. They can tell, for the most part, when they're being sucked up to. Keep the compliments un-exaggerated and related to their work.

My best recruiting experiences have been the ones where the recruiter was transparent from the start and I was made to feel like they were truly invested in potentially hiring me. I think most people are the same; we just want to feel valued and respected. With a little extra effort, your recruiting emails can do both—and net you some Grade A talent.

How to force your Mac to stay awake

5 tips for creating a case study that converts