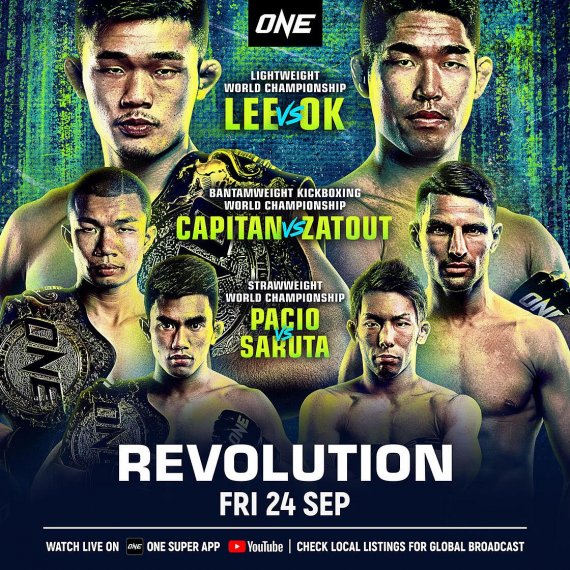 FIGHT CARD for ONE: Revolution! pic.twitter.com/AdUwBiBPne

Three title bouts will high the cardboard for One Championship
“Revolution” on Sept. 24, the Singapore -based promotion introduced
Tuesday.

One “Revolution” takes place at Singapore Indoor Stadium in
Singapore and airs on the One Tremendous App. Three different contests have been
confirmed for the night’s important card: Martin
Nguyen vs. Kim Jae Woong at featherweight (155 kilos); Amir
Aliakbar vs. Anatoly Malykhin at heavyweight and Victoria
Lee vs. Victoria
Souza at atomweight (115 kilos).

The 23-year-old Lee is at the moment on a six-bout profitable streak. In
his most up-to-date look, the Evolve MMA consultant defeated
Timofey
Nastyukhin through first-round TKO at One on TNT 2 on April 14.

Okay is coming off a signature triumph at One on TNT 4, when he
earned a unanimous verdict over former UFC and Bellator champion
Eddie
Alvarez on April 28. The Busan Workforce Mad product has gained 4
straight fights total.

After dropping a cut up resolution to Saruta at One Championship
“Everlasting Glory,” Pacio gained the rematch through head kick knockout at
One “Roots of Honor.” Pacio has since earned triumphs over Rene
Catalan and Alex silva
underneath the One banner.

Saruta rebounded from his loss to Pacio with victories over
Daichi
Kitakata at One “Century Half 2” and in opposition to Yoshitaka
Naito at a Shooto occasion.